Culross village in the Kingdom of Fife

Culross is a village and former royal burgh and parish, in Fife, Scotland. It is a popular tourist destination due to its historic palace.

The historic village of Culross is situated on the banks of the Firth of Forth where it overlooks the delights of the Forth Road Bridge, the petrochemical works of Grangemouth, and the Longannet power station.

Not exactly what you’d call inspiring views then, so it’s surprising that this sleepy wee hamlet is actually one of the most beautiful villages in Scotland.

Culross has a rich history, having been founded in the 6th-century and enjoying great wealth from the 16th to the 18th centuries thanks to two exports that were readily mined there – sea salt and coal.

The export of these resources brought in a large amount of money to Culross which is why so many of the buildings in this quintessentially Scottish village are so impressive, most notably the 16th-century ‘palace’ that dominates the centre of it.

Visiting Culross is a bit like stepping into a time machine and it’s easy to see why many television productions and movies have been filmed there – with the ever-popular bodice-ripping TV show Outlander using it extensively during season 1 where it set the stage as Cranesmuir, and the movie ‘Captain America’ using Culross to portray a small Norwegian town.

The reason why the village appears to be stuck in time is that for the last 90 years the National Trust for Scotland have painstakingly restored the old buildings, cobbled streets and defensive walls back to their former glory, after realising that this once-forgotten settlement is one of the few in Scotland that’s remained unaltered from the days when it was an industrial powerhouse.

READ NEXT:
The Complete Guide to Visiting the National Flag Centre in East Lothian

You can discover this time capsule for yourself if you head towards Dunfermline in Fife and follow the brown tourist information signs that dot the A985.

Culross is only 10 miles from Dunfermline and should take no longer than 20 minutes to drive from the city so it’s an ideal place to visit after wandering around Dunfermline Abbey, (which you can read about in my Dunfermline Abbey guide) or exploring the picturesque coastline near Charlestown.

Things to do at Culross

Once at Culross you’ll find a large car park facing the Firth of Forth which looks out across a railway line (no longer serviced by a train station, unfortunately) where you can see the remains of the original pier that once served as Culross’s main harbour.

It’s worth crossing the rail track to take a look at the pier as you can still see the remains of the 400-year-old stonework at the far end, although it’s a shadow of its former glory having been partially torn down to repair the port at Leith in the 17th-century.

Thankfully though, a series of repairs are now underway and it’s hoped to completely restore the structure in the coming years.

From the pier, you can head towards the village square and two of the highlights of Culross – the ochre-coloured Culross Palace and the Town House.

The palace is actually the former dwelling of Sir George Bruce who owned the once-prosperous coal mines and salt pans, and while not officially a royal residence it was used by James VI in the early 1600s so it does at least have some royal connections.

It’s a stunning building full of tiny rooms decorated with elaborately painted ceilings joined by a maze of passageways, but it’s the outside that draws the majority of visitors.

The NTS have done a remarkable job of restoring the 17th-century gardens and in summer the smells of herbs and fruit trees are a real assault on the senses, especially with the salty tang of the crisp sea air blowing in from the Firth of Forth just a hundred yards away.

With the sun reflecting off the mustard-yellow of the palace’s harled walls and the gentle clucking of the resident dumpy hens playing in your ears you could easily be forgiven for thinking you’ve just been transported back in time 280 years to Jamie and Clair Fraser’s Outlander.

READ NEXT:
The Complete Guide to Visiting The John Muir Way from Helensburgh to Balloch in West Central Scotland

At this point it might be a good time to rejoin reality and pop around the side of the palace into Bessie’s tea room which is set inside one of the old storerooms. The tearoom offers a welcome rest with a fine selection of meals and great coffee, and the prices are reasonable too. Definitely recommended.

Next in a tour of Culross comes the Town House which was built in 1626 and expanded in 1873 with an enormous clock tower. It’s a very grand building and while not quite as statuesque as the palace it’s just as interesting with a small museum, an art gallery, and a local-crafts gift shop inside.

I really enjoyed looking inside the Town House as it’s very atmospheric and it’s got a surprisingly interesting history. In addition to being the former home of the Bishop of Dunblane it was also used as a prison for condemned witches prior to their execution, with the witches supposedly locked away in a secluded room up in the attic somewhere.

I can only imagine the stories the walls of this building must have to tell and I’d love to explore all the parts that are off-limits to tourists, but time was marching on during my visit and I needed to get moving to re-create a scene from Outlander with my other half…

From the Town House, you’ll follow steep cobbled streets lined with white-harled houses that lead to the village’s Mercat cross – a stone monument that was used for trading cattle and other goods back in the 16th to 18th centuries.

The cross is situated in a jewel of a village square surrounded by tall townhouses and low cottages roofed with a distinctive red slate, and it’s here where Jamie Fraser met Claire after her visit to Geillis Duncan in the show.

That will make absolutely no sense to anyone who’s not a fan of Outlander, but if you are you’ll recognise several of the buildings in this living museum and it’s a must-visit site if you ever decide to do an Outlander pilgrimage.

Once you’ve explored the square you’ll find the final highlight of a visit to Culross – Culross Abbey – up the narrow street of Tanhouse Brae which leads away from the coastline towards the highest point of the village.

READ NEXT:
The Complete Guide to Visiting Greyfriars Bobby in Edinburgh

The abbey is believed to have been founded in the early 1200s and is divided into two very distinct sections, with the medieval ruins on one side and the newer Kirk located directly behind it.

There’s not much of the old abbey that’s still standing, but it does have a lookout platform that offers amazing views across the Forth, while the pillars of a once-monumental cloister can be found in the grounds just around the corner.

The newer section has more to view and heading inside the Kirk you’ll find a collection of beautiful stained glass windows, monuments and transept chapels, along with a few information boards.

I recommend you take the time to read these boards as they’re quite interesting and they’ve got some fascinating tales to tell, like the fact that Culross is believed to be the birthplace of St. Mungo who later went on to have a shrine devoted to him which over time grew into the city of Glasgow.

It’s just one of the many fascinating things to discover in the quaint coastal village of Culross, and if you’ve got any interest in Scotland’s heritage I reckon you owe it to yourself to take a walk around this remarkable historic site in the Kingdom of Fife.

From Glasgow: Take the M80 north and merge onto the M876. Cross the Kincardine Bridge and turn right on to the A985.

From Edinburgh: Take the M90 north over the Queensferry Crossing, leave at junction 1 and take the A985 towards Kincardine.

READ NEXT:
The Complete Guide to Visiting Aberdour Castle in Central Scotland 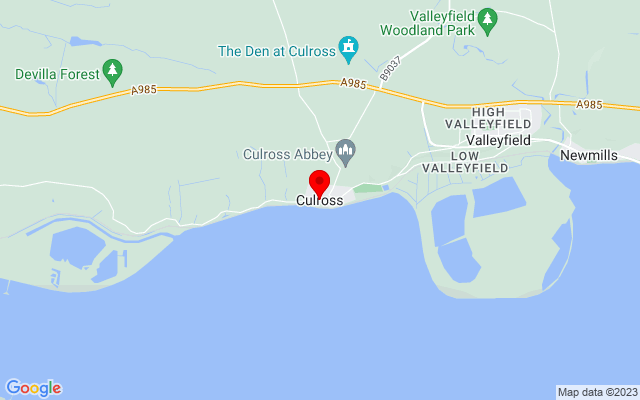 There’s no fee to visit Culross other than car parking charges.