Fort George was built in 1746 in the wake of the Battle of Culloden and is recognised as being one of the most impressive fortifications in Europe.

The Battle of Culloden in 1746 marked the end of the Jacobite uprising and the attempt by Bonnie Prince Charlie to claim the throne of Britain for the Stuart monarchy. It was also the catalyst for the creation of one of the grandest fortifications in Europe – the magnificent Fort George near Inverness.

This mighty barracks took a full 22 years to build and was originally intended to be a secure base for the army of King George II after Culloden, but by the time the building works were completed the threat from the Jacobites had all but disappeared.

Even so, the fort remained an important defensive position for the British army for the following 250 years and it’s still in use as a British military base today.

This garrison fortress has barely changed since being built in the mid-1700s and it’s one of the few places in Scotland that’s open as a tourist attraction but is still being used just as it would have been over 200 hundred years ago.

It’s a great place to take a step back in time and offers visitors a unique insight into life as a British Redcoat in the years following the Jacobite uprising.

You may also like...  The Complete Guide to Visiting Bonawe Iron Furnace in Argyll

The military base is surprisingly big and within its 1-mile perimeter of enormous walls you’ll see defensive platforms bristling with cannon, collections of original weaponry, a regimental chapel containing battle flags, recreated barrack rooms and a museum dedicated to the Highlanders Batallion of the Royal Regiment of Scotland.

Perhaps topping the list of these highlights though is Fort George’s location, nestled on the banks of the spectacular Moray Firth and looking out across the countryside of Inverness.

You’ll see loads of wildlife here (including dolphins) so be sure to take your camera and binoculars with you when you visit.

Read on to discover what else you can see during a visit to Fort George.

Things to do at Fort George

It’s impossible not to be impressed by the scale of this historic attraction.

On entering the site you’re confronted with mammoth defensive walls that ring an exceptionally deep and wide trench that would have been almost impossible to breach by invading armies.

Amazingly, these defensive walls are over a mile in length and enclose an area the size of five football pitches. It’s quite a feat of engineering and just goes to show how much of an impact the Jacobites made on the British government.

Pass through the killing gates (where enemy soldiers would have been trapped and fired on from all angles) and you enter the main courtyard where a series of impossibly neat barrack blocks face a beautifully manicured lawn.

It’s all too easy to imagine the training and exercises that countless soldiers would have performed over the last 250 years, brought to life due to that fact you’ll see modern-day soldiers going about their duties, but moving forward between the regimental buildings will open up plenty of other unexpected surprises.

You may also like...  The Complete Guide to Visiting Dunbar Harbour in East Lothian

To one side you’ll see the grand magazine, originally designed to hold nearly 3,000 gunpowder barrels but which is now home to one of the finest collections of weaponry in Scotland. To the other, you’ll find the Highlanders Museum, the second largest regimental museum in Scotland after the National War Museum at Edinburgh Castle.

Continue exploring the fort and you’ll find the barrack rooms with their recreations of 200-year old soldiers quarters, while the far end of Fort George opens up to the garrison chapel and one of only two dog cemeteries in Scotland (built as the final resting place for the regimental mascots).

It’s here at the ramparts surrounding the chapel where you’ll be able to take in some of the best views of your visit to Fort George, with the Moray Firth opening up before you – and if you’re lucky you’ll get to see pods of bottlenose dolphins swimming close to the shoreline.

There are plenty of opportunities to relax while you’re exploring the site thanks to the facilities installed by the fort’s managers, Historic Environment Scotland.

A picnic area and cafe will allow tired feet to take a rest, while the well-stocked gift shop offers plenty of opportunities to find the perfect souvenir of your visit.

As a top tip I recommend you take a visit to the nearby Batlle of Culloden memorial where you can see for yourself where the Jacobites were finally defeated once and for all. You can read all about this attraction with my Guide to the Battle of Culloden Memorial.

You may also like...  The Complete Guide to Visiting the Forth Road Bridge near Edinburgh

Fort George is a first-class historic attraction and I was highly impressed with the amount of restoration that HES has carried out on the site. To my mind, it’s one of the best military attractions in Scotland and I think it’ll be equally enjoyed by couples, singles and families alike. 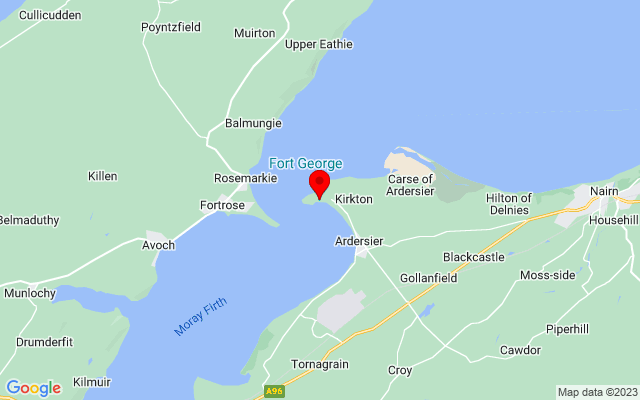 The Complete Guide to Visiting Holyrood Palace in Edinburgh