Glasgow Green is a 55-acre park set in the centre of Glasgow. It is the oldest park in the city and is also home to the People’s Palace social history museum.

Popular events including the TRNSMT music festival and the World Pipe Band Championships are staged in the park annually while the remainder of the year sees the grounds used for leisure activities for the city’s residents.

Review of Glasgow Green and the People’s Palace

Glasgow is well known for the number of inner-city green spaces it has compared to other British cities and in fact it’s second only to Edinburgh for its parks, gardens and other outdoor areas that allow its residents to enjoy the great outdoors.

While Scotland’s capital has green spaces covering a surprising 49% of the city, Glasgow comes second with a still-impressive 32%, which is actually pretty good when you compare it to other major cities like greater London (23%) and Manchester (20%).

Even the word ‘Glasgow’ means ‘dear green place’ in Gaelic, and if you spend any time exploring the city you’ll soon find that it really does live up to its name.

There are over 90 parks and gardens in Scotland’s largest city, many of which are home to big tourist attractions like Kelvingrove Park – home of Scotland’s most-visited free attraction, Kelvingrove Art Gallery and Museum.

But another park that’s incredibly popular with locals and tourists alike is Glasgow Green and in my opinion it’s the most interesting green space in the city.

Glasgow Green is the oldest parkland in Glasgow – being granted to its residents by King James II all the way back in 1450 – and since that time it has been integral to the city’s culture.

Monuments and historic buildings are littered across the 55 acres that the park covers and there are more than enough things to see and do to occupy a family for an entire sunny afternoon (…yes, Glasgow does have the occasional sunny afternoon…).

The highlight of a visit is seeing the People’s Palace, the social history museum and garden conservatory that was opened in 1898 as a cultural centre, while outside you’ll find the stunning Doulton Fountain and the statuesque Nelson’s Monument just a short distance away.

Aside from history, modern times have seen Glasgow Green turn into a hub for some of the biggest events held in the city with the TRNSMT music festival and the World Pipe Band Championships being two of the most popular.

There are also children’s play areas, an orienteering course, a football centre, and viewing platforms to enjoy the River Clyde which flows alongside the park. Not bad for an area that was once used for grazing cows.

Things to do at Glasgow Green and the People’s Palace

Aside from office workers looking to take a lunch break the park is popular throughout the year with visitors coming to look at the historic landmarks scattered all over the expansive grounds.

While many of these are worth spending time at the majority are only of interest for a quick camera snap, so I’ll list the best points of interest below.

This attraction is the main draw for visitors to Glasgow Green other than seeing the events held in the park and it has provided entertainment facilities for the city since initially opening in January 1898.

Originally designed to give Glasgow’s residents reading and recreation rooms it was expanded in the 1940s to become the city’s social history museum, and to this day the museum floors tell the story of the people and the city from the 1750s up to the present day.

The Palace has closed on a couple of occasions due to deterioration of the building (the most recent being in 2018) but it has now been restored and it offers free access to photography exhibitions, museum exhibits, a café and the highly-impressive Winter Gardens.

The gardens are housed in a huge greenhouse similar to Kibble Palace at Glasgow’s Botanic Gardens and it’s a place that’s well worth exploring if you’re paying Glasgow Green a visit. And best of all, the museums and galleries are free to enter.

Step outside the People’s Palace and you’ll see a courtyard containing a beautifully ornate fountain. This is the Doulton Fountain and it has been part of the Glasgow Green landscape for well over a hundred years.

The fountain was given to the city as part of the International Exhibition in 1888 to celebrate the reign of Queen Victoria, although amazingly the enormous 70-foot wide and 46-foot tall monument has been dismantled and moved twice.

The first move happened when it was brought into the park from the 1888 exhibition and it was moved again 116 years later when it was restored as part of a £2 million restoration programme that placed it at the front of the People’s Palace.

Here’s hoping they don’t decide to move it a third time.

You can’t really miss this category A listed monument as it’s the tallest point in the park, standing 143 feet tall and surrounded by a massive wrought iron fence.

The obelisk is dedicated to Admiral Horatio Nelson and was erected just one year after his death in 1805, a full three decades before the more famous Nelson’s Column in London.

Like the Doulton Fountain, a lightning strike caused extensive damage early in its history but it has since been renovated, most recently in 2002 when it was brought back to its former glory after more than 200 years of neglect.

If you visit the park from the city centre you’ll probably enter it from the north-east where you’ll pass through the masterpiece design of Robert and James Adam’s McLennan Arch.

The arch sits in an open courtyard where it looks a bit out of place in my opinion, but then it was never originally designed to be there.

It was at one point in history the centrepiece of the Glasgow Assembly Rooms on Ingram Street, but after they were demolished in 1894 Bailie James McLennan arranged for it to be moved to Monteith Row and then Glasgow Green.

In total the McLennan Arch has been moved four times in its lifetime so hopefully it’ll be allowed to remain at its current location for a while longer. It’s certainly a photo-worthy example of Victorian architecture anyway.

Other attractions in the park

There are quite a few activities and things to do at Glasgow Green if you take the time to explore it but most people will either recognise it for the 18 football pitches on Flesher’s Haugh or for the events that are staged in the park throughout the year.

The TRNSMT festival has only been held in Glasgow Green since 2017 but it’s already shaping up to be one of the biggest music events in Britain, so if you’re thinking of going and want to find out more about it you can read my Complete Guide to the TRNSMT Music Festival.

The World Pipe Band Championships are held over two days in August and each year more than 8,000 pipers and drummers compete to be crowned best in the world. The event has been staged since 1947 and regularly attracts more than 220 bands – with more than a quarter coming from overseas.

All in all I reckon Glasgow Green rightly deserves its place as one of the top green spaces in the city and it comes highly recommended if you fancy a bit of fresh air mixed up with a lot of Scottish history.

As the park is so central it’s easy to use it as a reference point to explore the rest of the city so after your visit read my Guide to the Best Places to Visit in Glasgow for further inspiration. 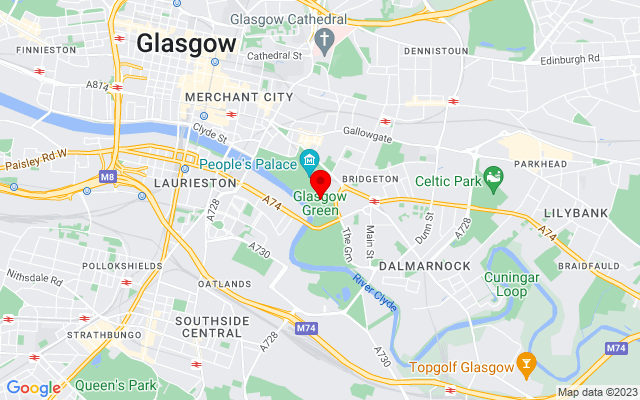 Things to do near Glasgow Green

More places to visit in Glasgow