The Isle of Islay on the west coast

The Isle of Islay is one of the larger West Coast islands located within the Southern Hebrides. Islay is a popular tourist destination thanks to its diverse wildlife, attractive country villages and stunning coastline, but it’s most famous for the distinctive whisky that’s flavoured with locally-sourced peat.

About the Isle of Islay

The Isle of Islay is one of the largest west-coast Scottish islands and has the nickname ‘The Queen of the Hebrides’ – a title that’s been passed down the generations for hundreds of years by the proud people who live there.

I can honestly say it’s a great place to visit having been there on numerous occasions, and I truly believe its nickname perfectly sums up the place.

There’s a lot more to the island than the distilleries that have made it so famous though, so I’ll give you a quick overview before covering its best features in detail.

Islay is the southernmost island in the Southern Hebrides and is home to over 3000 people, with much of the workforce occupied in the fishing, agriculture, tourism and whisky-distilling industries.

The latter is easily the biggest employer and for such a small island it’s amazing to think that nine working distilleries operate daily, churning out high-quality whisky for consumption around the world.

Unlike other wind-battered islands like Tiree, you’ll find that Islay has lots of woodland to enjoy in addition to beautiful beaches and quaint villages, and there’s a surprising amount of wildlife to see if you explore the rugged coastline that surrounds it.

This mixture of natural beauty and world-class whisky draws tens of thousands of holiday-makers annually, and having spent so much time there myself I’ve got no problem rating it equally against Skye and Mull.

Things to do on the Isle of Islay

Whisky isn’t the only thing worth visiting Islay for. There are beautiful beaches galore on this little slice of west-coast heaven and you’ll frequently find wide-open expanses of white sandy beaches lapped by crystal-clear sea with barely another soul to be seen. You really will struggle to find anywhere else quite like it.

READ NEXT:
The Complete Guide to Visiting Yellowcraig Beach in East Lothian

As the fifth-largest island in Scotland covering 239 square miles, Islay has plenty of wide-open spaces to explore and there are many native species for birdwatchers and wildlife lovers to see.

The rugged east coast is especially interesting thanks to its dramatic coastline as it rises steeply from the Sound of Islay up to the mountain of Beinn Bheigier which stands tall at a height of 491 metres.

The Southern coast of Islay is heavily wooded compared to the rest of the island and there are some amazing places to explore, including Claggain Bay and the stunning wide-open peninsula at The Oa.

The Islanders generally live in the villages from which most of the distilleries take their name, so if you’re a lover of Bowmore, Port Charlotte, Port Askaig and Port Ellen you’d be well advised to take a walk around their namesake hamlets.

Pretty much all villages on Islay are a walk back in time, with quaint, quiet high streets and plenty of interesting walks to be found.

Bowmore is especially interesting and a visit there simply isn’t complete without a visit to the famous distillery and tasting room overlooking the seashore. It’s a wonderful spot to lose yourself in the history of the west coast islands for a few hours.

One thing I’d definitely recommend you do before setting off to explore Islay is get an Ordnance Survey map so you can find the best walks. OS maps are invaluable for this and I find them a hundred times easier to use than Google Maps. Buy OS Explorer Maps direct from Ordnance Survey.

The Isle of Islay Whisky

Islay is one of the five whisky distilling regions in Scotland which has its identity protected by law. Even the word ‘whisky’ is protected, with all other distilleries in the world having to use a different spelling – which is why you’ll always find American and Irish spirits labelled as whiskey (note the letter e).

Due to the use of Islay peat in the distilling process, the single malts produced on the island have a very distinctive smoky flavour that’s world-renowned for being the most intense of all the whisky-producing regions.

But there’s a lot of history associated with Islay whisky too.

READ NEXT:
The Complete Guide to Visiting the Crieff Hydro in Central Scotland

The oldest distillery on the island can be found in the village of Bowmore and was founded all the way back in 1779, a time when Islay’s whisky was so popular that there were 23 distilleries in operation – although most of these have now sadly closed their doors.

If you want to learn more, most of the remaining distilleries have guided tours where for a small fee you’ll be shown the entire distilling process before being given a sample or two.

There are also some excellent cafes and gift shops at most distilleries so there’s really no reason not to visit at least one of them during your stay.

If you’re interested in discovering the history of Scotch and how it’s made you can also read my complete guide to the single malt whisky regions of Scotland.

The Isle of Islay Wildlife

Along with the tourism for Islays landscapes and distilleries it draws in thousands of birdwatchers each year who come to view the vast annual migrations.

There are also several thousand deer, otters, whales, seals, lizards and an incredible variety of flora and fauna to see, so if you choose to book a holiday on Islay you might find it worthwhile taking a look at the wildlife page of the official website before you leave.

You might even be able to say hello to a friendly Heilan Coo on your travels!

Islay is basically a wildlife-lovers idea of heaven and comes highly recommended if you want to really experience the nature of Scotland’s west coast islands.

The history of the Isle of Islay

Due to its close proximity, Islay has strong links to Ireland that stretches back thousands of years, with many place names deriving from the Irish Gaelic language.

READ NEXT:
The Complete Guide to Visiting the Nevis Range Mountain Gondola in the Highlands

In fact, from the 6th-century Islay was considered to lie within the Irish kingdom of Dal Riata rather than Scotland, although by the 9th century the Irish influence was starting to be replaced by Norse settlers who at the time were expanding their lands beyond Scandinavia.

From the 9th-century until the 12th-century Islay was ruled by kings of mostly Norse origin, with the most famous being Godfred Crovan, the fierce and much-feared warrior who was the King of Dublin until his eventual death on Islay in 1095.

His death was significant because it marked the point where the population of Islay finally resisted their Norse rulers, culminating in the battle of Largs in 1263.

Shortly thereafter the Norwegian king handed over the authority of the Southern Hebrides to the Scottish King Alexander 3rd, and the Isle of Islay has remained under Scottish rule ever since.

You’ll find evidence of the reign of these ‘Lords of the Isles’ at Finlaggan on the northern side of Islay. There’s a musuem on the site which is quite interesting and a loch with burial remains that are hundreds of years old.

So there you have it. Wildlife, whisky and history on one compact, easy to access Scottish island. I can’t rate it highly enough and I genuinely can’t wait for my next holiday on Islay. See you there!

READ NEXT:
The Complete Guide to Visiting Cove and Pease Bay in South East Scotland

The Isle of Islay lies in Argyll just south-west of Jura, and only 25 miles north of the Irish Coast. The island can be visited by air and by sea. 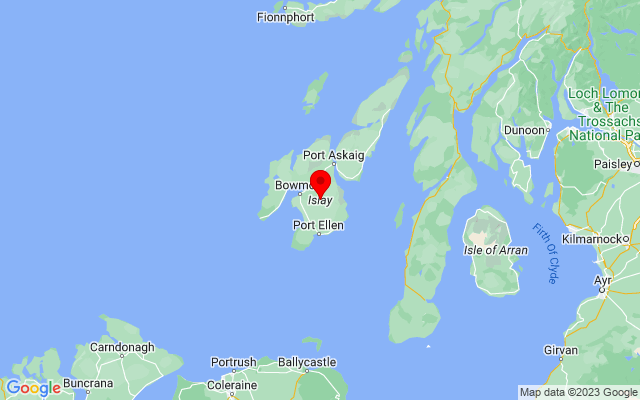 Getting there: Travel to Islay is via ferry

Getting around: Dependent on location