The Museum on the Mound in Edinburgh

The Museum on the Mound is located in the Bank of Scotland building in the centre of Edinburgh and tells the story of money, trade and crime.

About the Museum on the Mound

If you’re stuck for ideas for things to do while you’re in the centre of Edinburgh you could do a lot worse than pop into the Museum on the Mound, one of the few museums in the world that’s dedicated to the one thing none of us ever have enough of – money.

The attraction is located in the headquarters of the Bank of Scotland between The Royal Mile and Waverley train station, and the aptly named museum ‘on the mound’ sits on top of an artificial hill that was made from excavated earth recovered from the foundations of Edinburgh’s New Town.

Some of the city’s most beautiful buildings lie on and around this site including the New College Assembly Hall and the High Court, but it’s the Bank of Scotland building that’s the most interesting in my opinion.

Although it’s free to visit a lot of attention has been put into the museum’s displays and the Bank of Scotland get a well-deserved high-five from me for making it interesting for both children and adults. That’s something most paid attractions struggle to pull off, let alone a free one.

It’s not a big museum by any means and you’ll easily finish your tour within an hour but I guarantee you’ll have learnt a few new things by the time you make your way back out the exit, and it’s one of the best ways to learn about the transformation of Auld Reekie into the modern Edinburgh we know and love.

Things to do at the Museum on the Mound

We all know that money makes the world go round (except in my wallet, which is usually empty) but have you ever wondered where something so mundane as banknotes and coins actually come from? Or why banks even exist?

RELATED POST:
The Complete Guide to Visiting The Scotch Whisky Experience in Edinburgh

Nope, me neither, but at the Museum on the Mound you’ll find the answers to these questions anyway through a collection of displays and antique objects that tell the story of money from 4000 year ago to the present day.

Take the very first room you walk into as an example, which just so happens to be the gift shop. Turn 90 degrees from the cash register and you’ll see a glass case under the window that’s filled to the brim with banknotes. A million quids worth! I’ve never seen so much cash before and unless you’re a lottery winner or Richard Branson (Hi Richard if you’re reading this… lend me a fiver?) I bet you won’t have either.

There are loads of interesting displays like that in this museum and a lot of them are interactive too – like the Lego-style bank building that you can knock down and build back up again to your heart’s content.

There are also interactive maps that show you how the city has changed since the 1600s and there are sketches of the ‘burgh that depict the city in different stages of its development.

They’re all genuinely fascinating and I found myself transfixed by how much Edinburgh has changed since the days when the Bank of Scotland built their headquarters in this magnificent historic building.

Other displays feature glass cases with money-themed objects and artefacts from history that include old coins and banknotes, and there’s even a few examples of ancient forms of money our ancestors used like tea, shells and feathers.

If the kids aren’t into that they can get hands-on trying to crack open a safe instead, and there are activity books to keep them amused if the thought of walking around a museum sends them into a strop.

Best of all though, the staff have interactive afternoon sessions with the youngsters where they get to strike their very own coins (while slipping a bit of education in there too). I thought that was a really nice touch and it nicely rounded off my short but very enjoyable visit.

The history of the Museum on the Mound

For over 200 years the Bank of Scotland’s headquarters has dominated the Edinburgh Skyline and if your first view of the city is from walking out of Waverley station then the domed building is probably the first thing your gaze drifts towards.

The Bank of Scotland is the nation’s oldest bank and was founded over 300 years ago in 1695. As the bank grew the need for a head office became a necessity so the custom-built headquarters were built in 1806.

RELATED POST:
The Complete Guide to Visiting Hopetoun House in the Lothians

The mound that the ‘Museum on the Mound’ refers to was created from 1.5 million cartloads of earth that were dumped onto the site during the construction of the New Town in the 18th century.

The mound is enormous considering it was created from carts of debris and though work began in 1781 it took until 1830 for the final load of earth to be deposited.

The original construction was commissioned in 1796 at the 100th annual general meeting but its location caused a lot of problems as it sat on top of earthworks that had been used as a local rubbish dump for most of the previous century.

This dump had a slope of over 16 metres between the front and back which meant any slippage of the earth under the foundations would have been catastrophic.

Thankfully though, the industrious Edinburgh architects created a retaining wall on the north side of the building which was obviously substantial as the building is still standing today.

As the popularity of the Bank of Scotland continued to grow the headquarters proved to be too small so a major plan of extensions began that was completed in 1878.

In addition to the existing building, full-height wings were added to the east and west sections and a single-storey extension was built along the front.

To address complaints that the original building was ugly, grand facades and statues were added, along with an impressive central dome.

Edinburgh’s residents were obviously happy with the new look because the building has remained unaltered ever since. 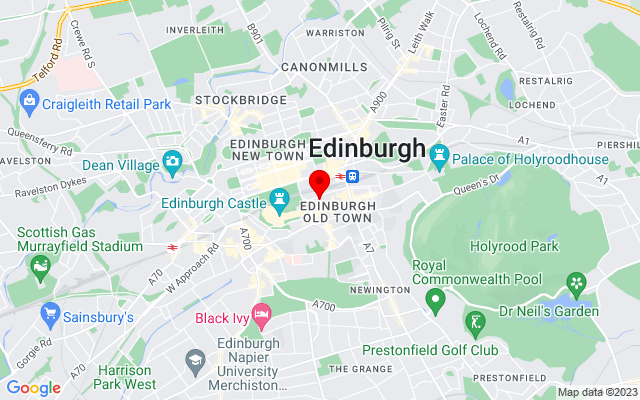 Get your Edinburgh tour tickets in advance here.

Admission to the Museum on the Mound is free.

RELATED POST:
The Complete Guide to Visiting Inchcolm Island and Abbey near Edinburgh