The Royal Yacht Britannia in Edinburgh

The Royal Yacht Britannia is the former royal yacht of HM Queen Elizabeth II which is located in the Ocean Terminal centre at Leith in Edinburgh. The yacht is now one of Scotland’s premier tourist attractions.

About The Royal Yacht Britannia

The Royal Yacht Britannia is the former royal yacht of HM Queen Elizabeth II which now takes pride of place at the Ocean Terminal shopping centre at Leith in Edinburgh. Over the course of her working life Britannia was the official residence of the Royal Family and sailed over one million miles around the world.

She’s now kept in immaculate condition by the Royal Yacht Britannia Trust and is open year-round for visitors to follow in the footsteps of world leaders as they pass through her beautifully ornate rooms.

You can explore every nook and cranny of the enormous ship from the state dining room to the engine room and throughout your tour you’ll find interesting information panels that’ll give you a glimpse into what life would have been like onboard this iconic example of British maritime history.

You may also like...  The Complete Guide to Visiting the Banff Heritage Trail in North East Scotland

There’s also an excellent restaurant onboard the ship and a first-class shop in the visitor centre, and as Britannia is moored alongside Ocean Terminal you can easily visit the restaurants, shops and cinema that the waterfront shopping complex has to offer.

This is an absolutely first-class attraction and although it’s a little way outside of Edinburgh’s city centre it’s definitely worth visiting, especially if you’re a fan of the Royal Family or have a love of ships and history.

Things to do at The Royal Yacht Britannia

The ship is entered via the visitor centre in Ocean Terminal shopping centre and as you walk around Britannia’s five main decks on a self-guided tour you can listen to an audio guide that explains what life was like onboard not only for the royal inhabitants but also for the Royal Navy crew that manned her during her voyages.

Starting at the bridge you pass through the state apartments, the crew quarters and the engine room before finally reaching the royal racing yacht, Bloodhound.

There are some genuinely interesting sections of this ship that all members of the family will enjoy exploring – including the huge state banquet room with its massive dining table and the gleaming Rolls Royce Phantom that used to travel on the ship along with the Royal Family.

If you fancy a little treat for yourself as you walk around Britannia you can pick up some really good homemade fudge in the NAAFI sweet shop, and there’s a very-much-recommended restaurant in the Royal Deck Tea Room where you can sample top-notch Scottish cuisine as well as coffee and sandwiches if you just want a snack.

You may also like...  The Complete Guide to Visiting The National Museum of Flight in East Lothian

The entry ticket includes free re-admittance for a year so if you ever come back to Ocean Terminal and fancy treating yourself to some quality food you could always take another visit just for the restaurant.

Britannia hosts events throughout the year with two or three different themes running each month so I recommended you return before your annual pass runs out.

Just be aware that in summer months it gets very busy, although that’s not surprising seeing as the attraction is frequently voted as one of the top five in Scotland.

The history of The Royal Yacht Britannia

Britannia was built at the Clydebank shipyards near Glasgow and successfully launched in 1953, with her maiden voyage to Malta beginning in 1954.

During her time at sea Britannia was manned by volunteers from the Royal Navy, some of whom liked it so much they served on her for over 20 years.

Whenever royalty was onboard the vessel a full troop of Royal Marines accompanied them and during this time they would have sailed around the globe several times as the Royal Family undertook their ambassadorial duties in almost every nation on earth.

Britannia also performed services as an aid ship when she evacuated over 1000 refugees from the civil war in Aden in 1986, and she was ready to be converted into a hospital ship at a moments notice.

Britannia was eventually decommissioned in 1997 after mounting political pressure regarding the cost of maintenance made her continued use impossible.

She was finally tied up at Ocean Terminal where The Royal Yacht Britannia Trust was set up to look after her, and today over 300,000 visitors make the journey each year to experience her fascinating role in British history.

You may also like...  The Complete Guide to Visiting Ben Lawers in Perth & Kinross

Ocean Terminal is 15 minutes drive from Edinburgh city centre, and the Royal Yacht Britannia Visitor Centre is on the second floor. 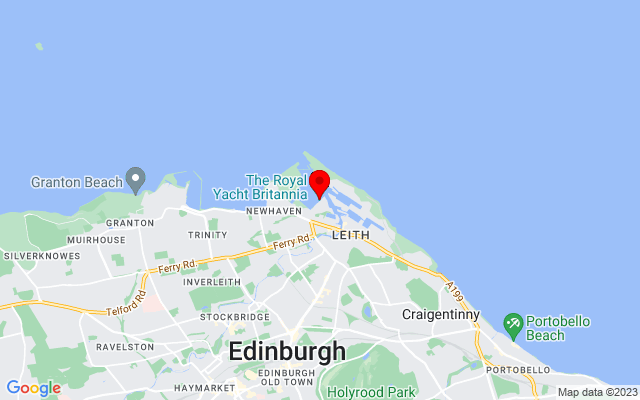 Britannia is open every day except Christmas Day and New Year’s Day. Allow up to 2 hours for the tour, and longer if you visit the Royal Deck Tea Room. If you want to experience Britannia at a quieter time during August I recommend you start your visit before 11.00am.

An audio handset guide is included in the admission price which is available in 30 languages.

You may also like...  The Complete Guide to Visiting John Knox House in Edinburgh The Complete Guide to Visiting the V&A Gallery in Dundee