Incredibly for such a relatively small area of Scotland, Speyside produces 60% of the country’s entire whisky output which is easily explained by the characteristics of the whisky produced there. Unlike the peaty malts of Islay and the smoky malts of the Highlands, Speyside’s location and low mineral content in the water means that the whiskies are normally very low in peat, if not totally unpeated.

The favours of Speyside whisky can be broken down into two categories; the rich sherry-flavoured malts and the lighter floral-flavoured malts. However, even within these styles the distilleries manage to infuse further nuances, with American bourbon and Spanish sherry casks adding delicate notes to the already complex flavours.

You may also like...  A Guide To: Edinburgh Butterfly World

Crossing the county of Moray is Scotland’s longest river – the Spey – which runs for over 100 miles northwards to enter the Moray Firth at Spey Bay. Furthermore, downstream at Granton you’ll find the world-famous River Spey salmon fishing region where thousands of fly fishermen from all over the world attempt to outwit Scottish salmon each year.

However, moving back to the regions most famous export, no trip to Speyside can be considered complete until a tour of its famous distilleries has been completed, and the following list highlights not only the whisky but the stunning countryside that can be found in this part of the country.

You may also like...  A Guide To: The Glasgow Gallery of Modern Art 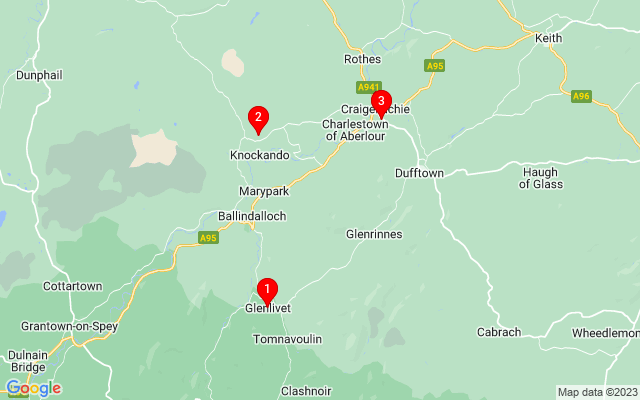 Although production was originally on a small-scale, the popularity of the brand means that it has now become the biggest selling malt whisky in the U.S., with around 6 million bottles being sold worldwide each year.

The Cardhu distillery can be found in open countryside around 17 miles from Grantown-on-Spey and around 7 miles from Craigellachie. The wide-open fields that surround this area would have made it easy for early illegal distillers to spot an on-coming government tax-man, which is the likely reason why the very first production of this famous whisky began here.

You may also like...  A Guide To: Glasgow Botanic Gardens

You can also take a look at my Speyside whisky itinerary days two and three.

If you liked this itinerary check out The Out About Scotland Guide to Scotch Whisky. An Itinerary For: The Aberdeenshire Castle Trail – Day Two A Guide To: The Glasgow Riverside Museum

An Itinerary For: A One-Day Drive from Edinburgh