Known as ‘Malt Whisky Country’, Speyside can be found in the north-east of Scotland, around the River Spey in Moray, Badenoch and Strathspey.

Incredibly for such a relatively small area of Scotland, Speyside produces 60% of the country’s entire whisky output, which is easily explained by the characteristics of the whisky produced there.

Unlike the peaty malts of Islay and the smoky malts of the Highlands, Speyside’s location and low mineral content in the water means that the whiskies are normally very low in peat, if not totally unpeated. This makes Speyside whisky much lighter and sweeter in flavour and therefore much easier to drink for beginners, who may find other stronger flavours an acquired taste.

The favours of Speyside whisky can be broken down into two categories; the rich sherry-flavoured malts, and the lighter floral-flavoured malts. However, even within these styles the distilleries manage to infuse further nuances, with American bourbon and Spanish sherry casks adding delicate notes to the already complex flavours.

You may also like...  A Guide To: Cairngorm Mountain Funicular Railway - The Highlands

Dotted around the area are dozens of castles and historic buildings, while the cities of Aberdeen and Elgin provide plenty of shopping opportunities.

Crossing the county of Moray, Scotland’s longest river, the Spey, runs for over 100 miles northwards to enter the Moray Firth at Spey Bay. Furthermore, downstream at Granton you’ll find the world-famous River Spey salmon fishing region, where thousands of fly fishermen from all over the world attempt to outwit Scottish salmon each year.

However, moving back to the regions most famous export, no trip to Speyside can be considered complete until a tour of its famous distilleries has been completed, and the following Speyside whisky trail itinerary highlights not only the whisky but the stunning countryside that can be found in this part of the country. 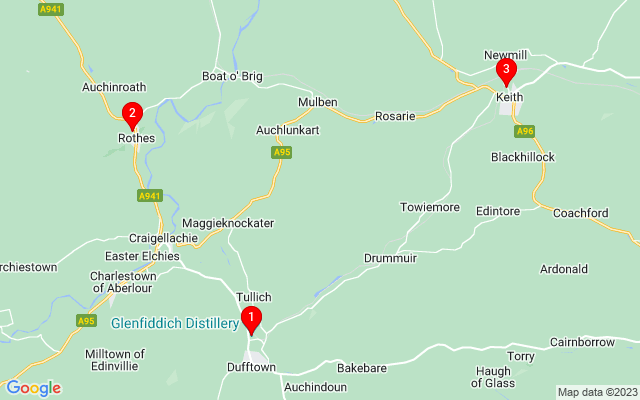 About the Glenfiddich Distillery

The world-famous Glenfiddich brand is instantly recognisable by its stag logo, derived from the Scottish Gaelic phrase ‘Valley of the Deer’, and this logo adorns every bottle of the 13 million litres of spirit which they produce annually.

You may also like...  The 25 Best Things to do in Edinburgh

Glenfiddich has the accolade of officially being the worlds best-selling malt whisky, and the impressive distilling plant certainly lives up to its status as one of the worlds most enjoyed single malts.

Although Glenfiddich is today one of Scotland’s biggest whisky producers its humble beginnings were tiny in comparison.

Started in 1886 by William Grant, the distillery building was hand-built stone by stone by the Grant family over the course of a year, and the passion the family has for whisky is still evident as Glenfiddich is one of the few distilleries that is still entirely family owned.

The scale of the operation is what is most impressive about a visit to the site, with 32 handmade copper pot stills producing the spirit that’s eventually sent to its own bottling plant within the complex.

In addition to the various tours that are available there’s an excellent restaurant on-site, a bar with drams costing from a few pounds up to a thousand, and an excellent gift shop selling high-quality Scottish goods.

About the Glen Grant Distillery

Glen Grant distillery is situated at the north end of the village of Rothes and is one of the smaller distilleries in our itinerary, consisting of just 8 stills and several warehouses, and some lovely woodland gardens that can be enjoyed in a glen just behind the distillery plant.

The Glen Grant distillery was founded by brothers John and James Grant who saw the business opportunities that lay around Rothes in Speyside.

Originally producers of illegal whisky, the Grant brothers saw that the abundant barley crops from the Speyside fields allied to the clear Spey waters were perfect for producing whisky in abundance, and so in 1840 they applied for a legal licence to produce malt whisky.

You may also like...  A Guide To: The Museum on the Mound - Edinburgh

After the brothers’ deaths, their nephew James ‘The Major’ Grant took over the family business where he devised the unusually tall and slender stills which create the distinctive Glen Grant taste that we can enjoy today.

During his tenure, the Major also brought back many plants from Africa during his service in the British army, and it was these specimens that established the previously mentioned woodland gardens at the rear of the distillery.

About the Strathisla Distillery

Originally founded as the Milltown distillery in 1786, Strathisla has the distinction of being the oldest continuously operating distillery in Scotland. Although it’s not the smallest whisky operation it definitely ranks towards the lower end of whisky production by volume, with only two stills in operation producing around two and a half million litres per year.

However, the small size of the operation is more than made up for by the quality of the product that Strahisla is famous for, and the distillery is also regarded as being one of the most attractive in the Highlands. Just walking around the production areas you get a sense of the old-world charm that exudes from every exposed wooden beam in the low-slung ceilings.

Although Strathisla was purchased by the Chivas Brothers conglomerate in 1950 they still make single malts in addition to providing malts for the ever-popular Chivas Regal blend.

As with most distilleries in this itinerary there are various tours that you have the option to sign up for, but the Strathisla Connoisseur Tour definitely needs to be experienced by every whisky lover.

Here you get to sample six limited edition single malts, along with a private tour of the plant with one of the Strathisla expert guides over the course of an afternoon. Definitely recommended!

You may also like...  An itinerary For: A Glasgow Weekend - Day One

You can also take a look at my Speyside whisky itinerary days one and three.

If you liked this itinerary check out The Out About Scotland Guide to Scotch Whisky.

A Guide To: The Scotch Whisky Experience – Edinburgh A Guide To: The University of Glasgow A Guide To: The Tall Ship in Glasgow