The Forth Road Bridge near Edinburgh

The Forth Road Bridge is one of the most significant long-span suspension bridges in the world, with a length of 1,006 metres between the two main towers. It is situated next to the UNESCO heritage-status Forth Rail Bridge.

About the Forth Road Bridge

You might be wondering why a bridge has been included in a website about Scotland’s tourist attractions, but bear with me because I think the Forth Road Bridge is well worth taking the time to visit if you come to explore Edinburgh and the Lothians.

This bridge is enormous and still impresses visitors more than fifty years after opening, but it’s the views from the footpath that draw in tens of thousands of cyclists and walkers each year.

As you cross the span between South and North Queensferry you’ll get a fantastic panorama across the Firth of Forth, with Fife in one direction and Edinburgh and East Lothian in the other, and it’s probably the closest you’ll get to the iconic Forth Rail Bridge without actually hopping on a train.

The Forth Road Bridge is one of the most significant long-span suspension bridges in the world with a length of 1,006 metres between the two main towers and a total length of 2.5km end to end.

When the bridge was first opened in 1964 by Queen Elizabeth II it was the fourth-longest bridge in the world (with the three longer bridges located in the United States) and it still impresses visitors to this day.

Things to do at the Forth Road Bridge

The road bridge stands 46 metres above the Forth river which flows underneath it and due to the fact that it runs between North and South Queensferry it offers fantastic views of the Edinburgh and Fife coastlines.

READ NEXT:
The Complete Guide to Visiting North Berwick Law in East Lothian

The Forth Road Bridge is one of three bridges that cross the Forth, with the unmistakable Rail Bridge to one side and the new Queensferry Crossing Bridge to the other, and fantastic views of both can be seen as you walk between them.

As you follow the pedestrianized section of the bridge you’ll likely stop and take a good look at the Forth Rail Bridge which runs alongside it.

Built in 1890, the red-painted rail bridge was regarded as the eighth wonder of the world at the time of its construction and to be honest it’s still an impressive example of Scottish engineering today.

With an overall length of 2,467 metres and standing 137 metres above its foundations, The Forth Rail Bridge was once likened to the Eiffel Tower and even though it’s not as pretty it was deemed significant enough to be given UNESCO world heritage status in 2015.

Another thing to note as you continue your walk between the banks of the Forth are hundreds of padlocks secured to mesh railings, left there by lovers of all ages over the course of many years. So if you’re taking in the view with a partner you might decide to place your own ‘love lock’ there too.

One negative point about visiting the bridge is that it can be a bit noisy with passing traffic, but now that the majority of vehicles are diverted onto the new Queensferry Crossing it’s a lot quieter than it once was. Even so, I’d think twice before taking your four-legged friends with you on a walk there.

The South Queensferry side of the bridge has a small exhibition which is open to the public that describes the construction of the bridge, as well as educating visitors about its history.

If you’re in the area then it’s definitely worth taking a walk across the Forth Road Bridge from bank to bank. Just remember to take your camera with you.

Find more places to visit in the area with my Scottish Tourist Attractions Map.

The history of the Forth Road Bridge

The first proposals for a road bridge across the Firth of Forth were raised with the Scottish government in 1923, just as private cars were becoming increasingly popular.

READ NEXT:
The Complete Guide to Visiting Edinburgh Castle

Before the bridge was built motorists had to cross the Forth via a small ferry which was slow and awkward to make regular journeys on. With the citizens of Edinburgh clamouring to make frequent trips to the north of the country it was inevitable that a road bridge would eventually be built.

One of the biggest construction feats that were accomplished during the building of the bridge was the manufacture of over 30,000 miles of high-tensile steel wires that had to be wound together to create the main cables.

This was a system that was so new to Europe a special school had to be built in South Queensferry just to teach the construction workers how to spin the wires together.

The bridge was finally completed in 1964, 6 years after construction first started and by that point an incredible 40,000 tonnes of steel and 125,000 cubic metres of concrete had gone into its construction.

The total cost was around £19.5 million, an immense sum for the early 1960s and it marked the bridge as one of the most costly engineering endeavours in Scotland.

Although there’s a car park at the Forth Bridge offices on the south side of the bridges, it’s often easier to park in South Queensferry and follow the footpaths.

READ NEXT:
The Complete Guide to Visiting Cullen in North East Scotland 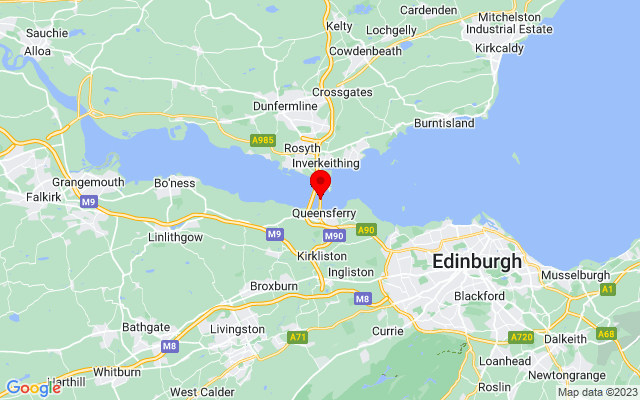 The Forth bridges are free to cross but currently only the Forth Road Bridge is possible to cross on foot. Please telephone the bridge authority or check the website before visiting as it may be closed in high winds.

Getting there: Car parking at the Forth Road Bridge building