Edinburgh’s Grassmarket is a picturesque market square located in the heart of the city’s Old Town. This historic site is surrounded by classic tenement buildings that line the roads along the iconic West Bow and Victoria Street but it’s best known for the lively pubs and restaurants that offer outside seating areas.

The Grassmarket is one of the oldest parts of Edinburgh and it was originally used as a marketplace for horses and cattle before falling into ruin in the 19th-century. Nowadays it’s a very popular visitor destination that offers an exciting assortment of places to eat and drink as well as a hub to explore nearby tourist attractions like Greyfriars Kirk and Edinburgh Castle.

Review of The Grassmarket

The Grassmarket in Edinburgh is a bustling collection of pubs and restaurants situated around a large open square on the southern side of Edinburgh Castle.

The square is centrally located in the city so you can easily find it by either walking west from Cowgate or Candlemaker Row or walking south from the Castle Esplanade.

If you head away from the direction of the castle on your route to the Grassmarket, take the time to stop and look back up as you’ll no doubt recognise some of the most iconic views that have been painted onto countless canvases throughout Edinburgh’s history.

This part of the city has long been a popular tourist destination due to the number of pubs and restaurants that line the streets, with outside seating areas that are perfect for enjoying a relaxing drink while people watching at the edge of the open square.

It’s a very atmospheric place with lots of Scottish architecture from the 17th-century including some of the oldest high-rise tenement buildings in Scotland.

Winding away from the north-east end of The Grassmarket is the West Bow Road which leads onto Victoria Street, a popular sightseeing spot with colourful shopfronts that slope gently upwards towards The Royal Mile, while the not-quite-as-attractive Cowgate follows an incline down to the east.

Victoria Street was built between 1829 and 1834 during a time of city refurbishments that were carried out in an attempt to modernise the Old Town, and the street provides a much-needed link to the elevated George IV Bridge.

Perhaps one of the most photographed roads in Edinburgh, Victoria Street is famous for the terraced buildings under which lots of colourful wee shops are located in what were originally empty archways.

Today, the street is popular with souvenir-hunting tourists thanks to the eclectic mix of shops in the arches, while the flagstone path located overhead on Johnston Terrace offers weary sightseers a place to relax with a beer or coffee in hand.

Find more places to visit in Edinburgh with my Scottish Tourist Attractions Map.

Things to do at the Grassmarket

I think I’ve already painted a picture that tells you The Grassmarket is a great place to eat and drink, but there are plenty of nearby tourist attractions that will keep weekend sightseers and day-trippers happily occupied.

There is, of course, Edinburgh Castle directly behind the Grassmarket which is one Edinburgh attraction that doesn’t really need much of an introduction.

The hulking mass of the castle looms dramatically overhead and it’s an easy walk up a few flights of steps to get there if you head to the west of the square and follow the signs to Castle Wynd.

To the east of The Grassmarket you’ll find a small roundabout and roads that lead off towards the Cowgate and Candlemaker Row.

The Cowgate road passes under the George IV bridge but after that point there isn’t too much to see other than a few pubs (Brewdog is situated a half-mile down the road if you have a preference for Scottish craft beers), although if you follow the road all the way to the end you’ll eventually arrive at the family-friendly Dynamic Earth attraction.

Candlemaker Row, on the other hand, leads uphill towards Greyfriars Kirk which has its own fascinating history and of course it’s also the final resting place of Greyfriars Bobby, the faithful Scotts terrier.

Across the road from Greyfriars is the National Museum of Scotland which is free to enter and offers enough things to see and do to keep a family occupied for most of the day, but if that’s not your cup of tea you can do an about-turn and head in the opposite direction down the George IV bridge road to grab a cuppa in the Elephant House café where JK Rowling wrote her first Harry Potter book.

You could then head back down Candlemaker Row and up Victoria Street to do a bit of shopping (some of the best independent craft shops in Edinburgh are to be found there) before turning north in the direction of Lawnmarket where you’ll find the ever-busy Royal Mile which is the beating heart of Edinburgh’s Old Town.

The history of The Grassmarket

When you visit the Grassmarket for the first time you might be surprised to find the area is so open considering the rest of the Old Town is so compact and built-up.

The explanation for this lies in the original purpose for which the square was used, namely as a place to sell horses and cattle hence the name ‘Grassmarket’, deriving from the time when grass was stored in large quantities to feed the marketplace animals.

The exact date when the first market was held is unknown but records dating back to 1477 show the Grassmarket was one of the leading trading areas within the city, a distinction it upheld for the following three hundred years.

If you take the time to explore the area you’ll notice that the north-east corner leads off to West Bow where traders of all descriptions plied their wares while the south-east corner leads up to Candlemaker Row – another site of industry in Edinburgh’s Old Town.

You’ll probably find yourself on this narrow winding street as you make your way from the Grassmarket to visit Greyfriars Bobby, but Candlemaker Row also has its own unique history.

Due to the overpowering stench that was created during the candle-making process (they used animal grease back then), Edinburgh’s candle-makers were banished outside of the Old Town boundary into the area which eventually took its name from the craftsmen who worked there.

The most substantial building is Candlemakers Hall which was built in 1722 and backs onto Greyfriars Kirk, and it’s also the place where you can find one of the few remaining sections of the Flodden Wall – the 16th-century stone wall that was built following the Scots defeat at the Battle of Flodden in 1513.

Apart from the cattle markets there was one other activity that made the Grassmarket infamous for hundreds of years, and that is its use as a site of public executions. From around 1660 the Grassmarket became the favoured location for hanging criminals in the city, with the story of Maggie Dickson gaining particular notoriety.

Maggie Dickson became so renowned there’s a pub named after her in the Grassmarket (half-way down on the north side) but if you want to learn her story before you pop in there for a quick pint (or two) you might like to read my Guide to Murders and Executions in Edinburgh. 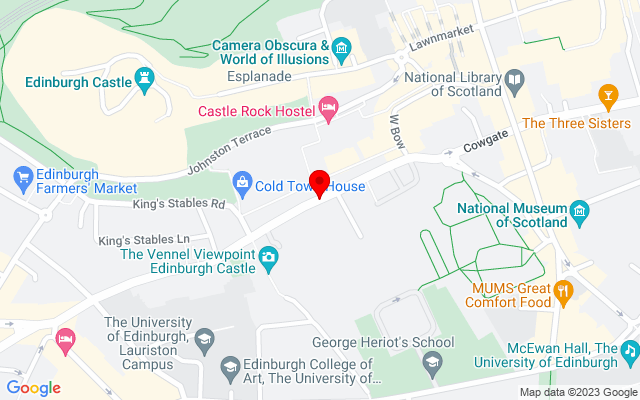 Things to do near The Grassmarket