The Isle of Mull is the second-largest island in the Inner Hebrides and features famous attractions including Tobermory village, Ben More, and Iona Abbey. The island is a popular alternative to Skye as it offers almost as many attractions but is significantly less busy.

Review of the Isle of Mull

The Inner Hebridean Isle of Mull is the fourth largest island in Scotland (and the entire United Kingdom) and is home to a wide variety of tourist attractions, with pretty harbour towns nestled along the rugged coastline and spectacular mountain landscapes that attract visitors from across the UK and beyond.

With some of the cleanest sand beaches in Scotland and the most diverse wildlife in Britain, Mull has plenty to offer tourists who are looking for a taste of the great outdoors.

Unlike some other western isles, Mull is relatively easy to get to thanks to the frequent ferries that go there daily from Oban, and because many visitors to Scotland still seem to prefer other, more famous islands for their holiday (i.e. Skye and Islay), tourism on Mull remains well-managed.

In fact, taking a hike into the mountain peaks on Mull could mean you won’t see another person all day, so if you’re after a bit of peace and quiet you could certainly do a lot worse than visit this lovely isle.

Things to do on the Isle of Mull

There’s a huge amount of activities to get involved with on Mull, and in fact there’s so many to choose from you might need a little extra time to ‘mull over’ which ones to visit first (see what I did there?). But the three biggies which you’ll most likely want to see are the town of Tobermory, the Isle of Iona and Iona Abbey, and Ben More.

You won’t go far wrong with a visit to Tobermoray as the first destination on your list as it has got a little bit of everything in one small coastal village.

Situated on a bay facing the Sound of Mull, this pretty village initially strikes you with its row of brightly coloured houses that follow the curve of the harbour, and if you think you’ve seen it before and have kids you’ll soon recognise it as the setting for the popular TV show Balamory.

There are frequent fishing vessels coming in and out of the quaint harbour so it’s a great place to get some fresh seafood, but the village also has a few restaurants and coffee shops.

There’s Mull Museum (free to enter) that will tell you all about the history of this fascinating island and there’s also a live music venue at An Tobar if you feel like continuing your visit into the evening.

If you’re a fan of whisky then you should definitely pay a visit to the Tobermory Distillery Visitor Centre located near the car park as they have some absolutely first-class spirits on offer, and while dads can get all misty-eyed about Mull’s fine single malts, mums and kids can pop next door into the Mull aquarium.

This fascinating attraction has the title of being Europe’s first catch and release aquarium which means that all exhibits are collected by local fishermen and kept on site for a maximum of 4 weeks before being returned to their homes back in the sea. What a great eco-friendly idea that is. Well done Mull.

Leaving Mull you can take a drive on the island’s mostly single-track roads to its south-west extremities to catch a small ferry across to the island’s other big attraction – Iona Abbey.

This 13th-century abbey was actually built on a religious site that was founded over 600 years earlier, and today Iona is regarded as Scotland’s most sacred site.

The abbey is not only the final resting place of several ancient Scottish kings but it’s also the site where Saint Columba built his first Celtic church all the way back in the 6th-century. It’s fair to say there’s a lot of history on this small island.

Iona itself is a lovely little place with some beautifully clean white-sand beaches, and although it’s only 3 miles long by 1.5 miles wide it has a few decent walking trails that mean you don’t have to visit the abbey and go straight home again.

The small village near the ferry landing point also has a couple of art galleries and shops selling locally made gifts, and there are the ruins of an Augustinian nunnery to explore as well.

Another great attraction on Mull is Ben More, the 3,169ft mountain that dominates the landscape for miles around. This mountain (it’s actually a Munro – a Scottish mountain over 3,000ft) draws in thousands of visitors annually who choose to scramble up its steep scree slopes and I thoroughly recommend you make a point of joining them.

Not only is Ben More the highest peak on the island but it’s one of the highest in the entire Inner Hebrides, only beaten by the mountains on the Isle of Skye.

While Ben More can’t take credit for being the tallest mountain I have to say it wins the award for having the most impressive panorama, with the view from the top encompassing the Sound of Mull, the islands of Staffa and Ulva, the Isle of Skye, and the Highlands over on the mainland.

Although the hike to the top is tough (very tough if you approach it from the south so approach it from the north at Dhiseig village instead), the views from the top are nothing short of breathtaking and on a clear day you can see for miles in all directions, even across to Ben Cruachan on the mainland.

There are simply too many other attractions to list them all on one page but I’ve got a few recommendations that you might be interested in if thoughts of Tobermoray, Iona and Ben More have already whetted your appetite.

First, head to the northern part of the island to the small village of Dervaig which lies a few miles west of Tobermory and follow the walking route to Quinish Point where you’ll find a magnificent peninsula that’s home to several pairs of Britain’s largest bird, the majestic Sea Eagle (also known as ‘the flying door’ because of its immense size).

Another highlight of Mull is Calgary Bay located on the west of the island. This impossibly pretty and secluded bay has a wide sweep of white sand that’s lashed by some of the clearest sea water you’ll ever find and features a woodland sculpture walk that’s great fun to follow.

The bay is a haven for wildlife and you can pretty much guarantee you’ll either see otters swimming about on the hunt for their next meal or seals lazing around on the nearby rocks. No wonder the beach has been voted amongst the top 20 in the country.

Carsaig arches are well worth visiting too, but only if you’re relatively fit and don’t mind a challenging walk/scramble over rocks. The arches themselves are sea caves that have been carved through the cliff faces by the power of the crashing waves, and while they’re certainly impressive it’s the walk to the arches that draw most visitors.

The route starts at Carsaig Pier which is worth visiting in itself because there are often seal colonies soaking up the sun on the exposed rocks jutting out of Carsaig bay.

After waving goodbye to the seals you’ll walk along rocky beaches and boggy grassland while following a boulder-strewn goat track, in-between scurrying across waterfalls and traversing narrow clifftop paths. One thing that can be said about this walk is that it’s not easy.

Along the route (which will take you across rocky beaches and enormous boulders), you’ll find the nuns cave where Iona’s nuns once sought refuge, birds of prey scouting for food, and herds of wild goats ambling about looking for their next mouthful of tasty grass.

It’s a wildlife-lovers dream, although please don’t attempt this walk in bad weather or if you’re an inexperienced walker.

Perhaps the last ‘big’ attraction on Mull is Duart Castle which is situated just a few miles from the ferry arrival point at Craignure village.

This fascinating castle has been standing on the Isle of Mull since the 13th-century but was left in ruin until only around a hundred years ago, at which time an extensive restoration project began to return the dilapidated building into something resembling its former glory.

The castle sits on a promontory overlooking the beautiful Sound of Mull and it’s surrounded on all sides by a wide expanse of grassland that’s a haven for wildlife.

There are also several areas of shingle beach that kids can run around and explore, while adults will appreciate the stunning views towards Tobermory in the north with the constant flow of ships that make their way towards Mull’s biggest town. It’s a really interesting place to visit and although many of the rooms in the castle are off-limits there’s still plenty to see.

I could go on about all the golf courses, the stone circles, the pony treks and the boat trips on the Isle of Mull, but I think you’ve got the idea by now, so why not take a journey there yourself and make up your own mind?

One final tip – get yourself a decent map to make the most of your time on Mull. I prefer waterproof Ordnance Survey maps which you can buy from their online store. Buy OS Landranger maps direct from Ordnance Survey.

The history of the Isle of Mull

People have been living on the Isle of Mull since the end of the last ice age around 8,000 years ago and standing stones and stone circles still litter the island to this day.

While the remains of Bronze and Iron age inhabitants have been found strewn across the entire island it was the arrival of Irish migrants in the 6th-century that catapulted Mull into prominence within Scotland’s western isles.

Saint Columba founded his monastery on nearby Iona in 563AD after which Mull became known as a pivotal centre of Christianity in Scotland.

Following a Viking invasion in the 9th-century, Mull became part of the Kingdom of Norway and continued to be run by the Norse for the next 400 years until the Treaty of Perth in 1266AD led to the island being handed over to the Scottish crown.

James IV gave authority over Mull to the MacLean clan shortly afterwards, although they were soon ousted by the Argyll Campbells who sought to suppress the Covenanter religion which the MacLeans followed.

In turn, the Campbells took charge of Duart Castle, only to sell it back to the MacLean clan several years later with the MacLean’s keeping ownership of it to this day.

Following the potato famine in the 1840s Mull’s economy collapsed, and by the early 20th-century there were more sheep living on the island than people.

However, the population slowly rebounded to around 3,000 inhabitants and the people who live on the island today continue to farm the land and fish the sea in addition to making money from the island’s new-found popularity with tourists. 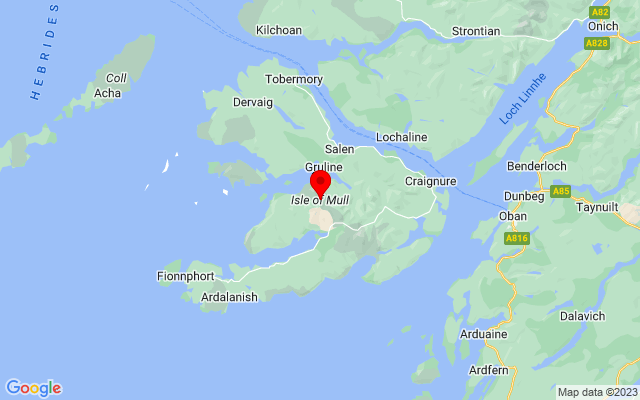