Blackness Castle is a formidable 15th-century castle that stands on the shores of the Firth of Forth in West Lothian. The castle is managed by Historic Environment Scotland and it is open daily for self-guided tours.

The area around Edinburgh is rich in history (as you’d expect from a city that’s been the capital city of Scotland since 1437) and there are more castles in the region than most others in Scotland.

While many visitors head straight to Edinburgh Castle for their dose of Scottish nostalgia, there’s another fortification nearby that’s equally interesting and has an (arguably) even better view from its ramparts.

The castle in question is Blackness, located close to the historic town of Linlithgow on the southern banks of the Firth of Forth.

The Forth, if you didn’t already know, is an expansive estuary that bisects the south-east of Scotland 55 miles inland from the North Sea, with its vast mouth between Edinburgh and Fife linked by the three monumental engineering feats of the Forth Bridges.

The estuary feeds into the very heart of Scotland so capturing it would have allowed invading armies easy access to Scotland’s biggest cities – which is one of the reasons why the powerful Crichton family decided to build such a heavily-defended fortress between the Royal palaces at Linlithgow and Edinburgh over 600 years ago.

It certainly would have been almost impossible to siege the place back in the 1400s and the massive bulk of Blackness’s fortifications are still impressive to this day.

Stand in the courtyard and you’ll see huge walls looming overhead that are up to 5 metres thick in places, with virtually no openings save for the artillery gun holes in the curtain wall and the crenellated turrets in the corners. Coupled with the sheer-sided walls that project into the water, Blackness Castle is a hulking mass of stone and mortar.

The castle’s unusual pointed shape led to it gaining the nickname ‘the ship that never sailed’ due to the curtain walls nearest the Forth looking just like a ship when viewed from a distance, and even the large tower inside is called the ‘mainmast’.

This is one ship that saw more than its fair share of war over the centuries, withstanding sieges and blockades right up to the end of Mary Queen of Scots rule until being left almost completely in ruin by the forces of Oliver Cromwell during the War of Three Kingdoms in 1650.

However, while many castles in this era were abandoned, Blackness Castle was fully repaired and even expanded following the restoration of Charles II to the throne, and the following 200 years saw its complete return to glory both as a prison and as an ammunition depot.

This later function led to new garrison buildings being built on two sides of the castle with a large courtyard in the middle and it served the British Army right up until WWI – which is impressive for a 600-year-old building.

As with most of Scotland’s castles it was eventually abandoned and was handed over to the Ministry of Works at the end of the First World War before passing into the care of Historic Environment Scotland (HES) who today maintain the site as a historic tourist attraction.

If you’d like to join a tour of Scotland’s best castles take a look at my recommended Get Your Guide castle tours.

This is a great castle to visit whatever time of year it is. I think that’s down to the fact that it’s so close to the city that you can easily visit both Edinburgh and Blackness Castle in the same day, but it’s also close enough to the Royal Burgh of Linlithgow so you could (in a pinch) also fit in a visit to the former royal palace as well.

It’s not just the imposing size of Blackness Castle that makes a visit worthwhile and tourists will be equally well rewarded by exploring the banks of the southern shore of the Firth of Forth before they walk through the entrance gate.

My advice before entering the castle is to climb the hill towards the back of the main gate and take a good look at the panoramic view that opens out in front of you. To the west is the Forth winding its way inland, to the north are the fields and hills of the Kingdom of Fife, and to the east lies Edinburgh with the famous Forth Bridges dominating the horizon.

A wide, sweeping bay lies to the south ringed by woodlands that are practically begging you to slip your boots on which is a bonus because the John Muir Way circles around this section of coastline on its way to South Queensferry and Bo’ness.

This stunning location is the perfect setting for a majestic castle and luckily for visitors the Scheduled Ancient Monument of Blackness Castle doesn’t disappoint.

If you’re coming here by car you’ll find a small car park in Blackness village a couple of hundred yards away but there’s a much more accessible parking area right next to the ticket office (be aware it gets pretty busy in summer).

The HES office is located in the old garrison building and you’ll find a small souvenir shop inside along with toilets, but I feel they’ve missed an opportunity by not opening up the rest of the building to tourists.

Likewise, the old officers building opposite is off-limits, and a peek through the window shows that it’s derelict inside so I can only hope HES have plans to restore it in the future.

The castle entrance is a short distance away on the other side of the courtyard but before heading inside I recommend you take a wander down the grassy area on the outer walls. You’ll get a great view along the Forth in both directions and there are picnic benches if you fancy a packed lunch with a picturesque waterside view.

After filling your lungs with all that salty air you’ll probably feel like getting on to the main event so head inside the perimeter walls via the entrance next to the abandoned officer’s accommodation.

Once inside the castle walls you’ll find pretty much every inch of the place is open to explore, from the mighty outer walls with their elevated walkways to the defensive towers and their rooftop lookout posts.

It’s an enjoyable experience whether you’ve any interest in history or not but I think children will especially like exploring the many nooks and crannies the castle offers.

There are information boards throughout the site so you can read all about the castle’s history if you like but you might prefer to roam about and soak up the atmosphere of the place – which Blackness has in spades.

The outer walls lead out from the entrance to the tower that forms the ‘bow’ of the ‘ship that never sailed’ and from here you can climb to the lookout post to admire the view before descending into the gloomy old prison.

Following the walkway from the prison leads you onto the eastern side of the castle where you’ll head inside the main part of the fortress to wander around the many rooms that at one time formed the sumptuous residence of the Crichton family.

There’s not a huge amount to do inside this part of the castle to be honest but HES frequently stage exhibitions inside so it might be worth checking their website before leaving home.

If not you’ll spend no more than half an hour in the inner buildings before stepping into the inner courtyard where you’ll find a very rocky area and the main tower.

The tower is actually pretty impressive thanks to its size, but for me, the highlight of this part of the castle is taking the winding staircase to the top and looking out over the Forth from the upper ramparts.

What a view up there! It’s stunning – there’s no other word for it – and it’s a great place to view the mudflats on the eastern side of the castle that are a Site of Special Scientific Interest. There are lots of birds living in this small area so take your binoculars or a camera with a decent zoom if you’re a bit of a bird spotter.

The final part of a visit to Blackness Castle is walking down the short pier that was used for loading munitions in the 1800s and taking a look at the estuary. You’ll see the castle from an angle where it looks like a ship and it’s a good way to appreciate the size of the place.

I’d say a visit for a family will take a good couple of hours if you’ve got kids that like to zoom about but plan longer if you like reading all the information panels.

In my opinion this really is a top historic attraction, and it’s one that fully deserves a visit alongside Edinburgh Castle. 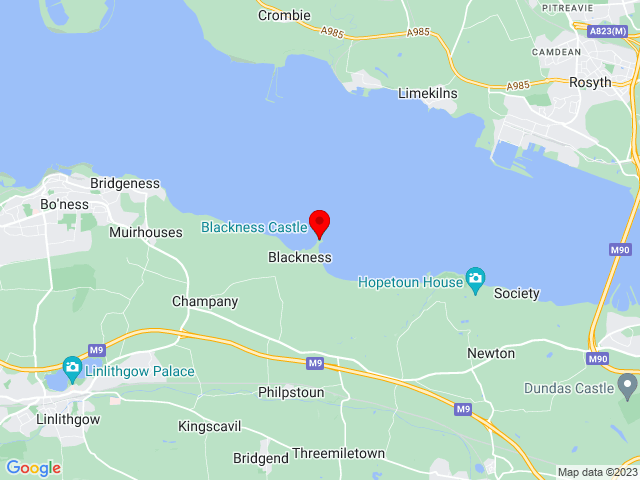 Things to do near Blackness Castle

Did they use Blackness Castle in Outlander?

Blackness Castle was used as a film set to portray Fort William in the TV series Outlander.

The design of Blackness Castle stems from its location on the banks of the Firth of Forth. Because the front of the castle projects onto the water it would have been susceptible to cannon fire from attacking ships. The angled ‘bow’ was designed to deflect cannonballs so that they would bounce off without causing much damage.

Can you go inside Blackness Castle?

Blackness Castle is maintained by Historic Environment Scotland and is open to the public for self-guided tours. There is paid entry to this castle. Visit the HES opening times page for the current opening times.

Blackness castle was built by Sir George Crichton in the 1440s.