Finlaggan on the Isle of Islay

Finlaggan is the former home of Scotland’s ‘Lord of the Isles’ and lies a few miles south-west of Port Askaig on the Isle of Islay.

The Isle of Islay… Whisky. Coastlines. Bowmore. Wildlife. Those are the things most people think of when they plan a visit to this wee island off the west coast of Scotland – distillery tours, a quick jaunt around a village or two, maybe a walk on a beach and then home again. Mission accomplished.

But there’s so much more to Islay than whisky (although the single malts it produces are nothing short of spectacular), and I think it’s a real shame that so many people obsess over the spirit and completely forget about the history and scenery the island has to offer.

I was lucky enough to spend a full week on Islay recently and after exhausting all the distillery options in the first 48 hours, I started to explore some of the lesser-known attractions tucked away in the slightly more remote areas. One of which is Finlaggan, the former stronghold of the Lord of the Isles.

You’ll find Loch Finlaggan a few miles south-west of Port Askaig at the northern end of the island. While you wouldn’t exactly call Port Askaig a bustling metropolis it’s definitely worth exploring the area surrounding it as it’s extremely pretty, with a wild and rugged coastline and expanses of thick woodland coupled with lots of walking trails that run deep into the heart of Islay’s wilderness.

There’s also a regular ferry that takes passengers to the nearby Isle of Jura (lovely place – check it out if you get the chance) and the three major distilleries of Bunnahabhain, Ardnahoe and Caol Ila are just up the coastline which all offer interesting tours.

After you’ve finished with that lot I suggest you take a short detour south on the A846 and keep your eyes open for a brown tourist information sign pointing down a rather non-descript single-track road – it’s easy to miss so don’t let yourself get too distracted by the landscape in this part of the island.

READ NEXT:
The Complete Guide to Tubing at the Midlothian Snowsports Centre

Follow the road a couple of miles through open fields and you’ll eventually arrive at Loch Finlaggan which is easily identifiable thanks to the visitor centre at the entrance.

There’s a small car park at the centre which is free to use but you’ll have to pay a small admission charge to get to the main attraction where you’ll find a collection of ancient gravestones, relics and buildings on a small island on the loch, all of which are related to the Lords of the Isles.

If you’ve never heard of them you might be interested to know that the Lords descend from Somerled, a 12th-century prince with a Norse and Gaelic pedigree who was allied more with Norway than Scotland.

At that time the politics of Scotland’s west coast islands were so far removed from the mainland they were regarded as being in an entirely separate kingdom from the rest of Alba (the Gaelic word for ‘country of the Scots’), and Somerled sought to expand his power far beyond the confines of the Scottish west coast.

In 1156 he successfully organised a coup against the ruling Godfrey the Black to become King of the Isles, and shortly thereafter launched a bid to invade Renfrew on the mainland.

However, as was common in those days he was betrayed by his own family and was murdered by his nephew, after which the kingdom was divided up between his sons from which the powerful clans MacDougall, Donald, MacRory and MacAlister emerged.

Later years saw a lot up upheaval, clan in-fighting, and clashes with Norway and Scotland that I won’t go into in this post, but the two small islands on Loch Finlaggan were chosen as the seat of power for the west-coast islands for the next 400 years.

History lesson over and back to the modern-day tourist attraction… There are two small islands on the north shore of the loch – Eilean Mor and Eilean na Comhairle – but it’s the latter you’ll spend most of your time on during your visit as well as learning about the history of the place in the visitor centre.

Read on to find out more about it.

Things to do at Finlaggan

It’s obvious a lot of attention has gone into creating the displays in the visitor centre and it’s quite an interesting place, but be mindful that young children are going to find it a bit of a yawn-fest.

READ NEXT:
The Complete Guide to Visiting the Solway Firth in South West Scotland

At least there are a couple of models of Viking longships to keep them entertained while you’re reading the information boards and there are a few relics recovered from the area to look at as well, but the main event is exploring the islands.

Unlike the visitor centre which is only open March-October, the islands are open all year and can be accessed via a wooden walkway through boggy reed beds. It won’t take long to walk there but there’s a surprising amount of insect-life to see in the summer which youngsters will no doubt find particularly fascinating.

Oh, and if you find the centre closed when you visit please leave a couple of quid in the honesty box – these guys rely on donations to maintain the site.

Once at the island you’ll be able to walk amongst the ruins of several old stone-walled buildings (not from the time of the Lords of the Isles unfortunately) as well as examine an interesting collection of engraved medieval gravestones.

The island isn’t that big and the landscape is a bit uninspiring in the harsh light of the day, but I was lucky enough to arrive as the sun was disappearing and I’m happy to report the view really came alive in the golden hue of the setting sun.

There’s a certain goose-bumpy (is that a real word?) atmosphere to Eilean Mor which might go some way to explaining why the Lords made it their seat of power, miles inland and far from the sea where their boats were moored.

But as atmospheric as it is, it really won’t take you long to see everything on the island, even if there are information boards dotted about at each point of interest.

To be honest, I’d plan no more than 30 minutes to an hour to see the lot, and as you’re on a wee island on a loch you can’t exactly go anywhere else other than head back to the car park once you’ve had your fill of grave slabs and cobbled-together stone walls.

But even so, I guarantee you’ll walk away having learned a few new snippets of information about Scotland’s history at Finlaggan, and to my mind it’s a fascinating glimpse into the heart of Islay that you’d otherwise miss if you just concentrated on the whisky.

READ NEXT:
The Complete Guide to Visiting The McManus Museum in Dundee

If you want to learn more about this island read: The Complete Guide to Visiting The Isle of Islay 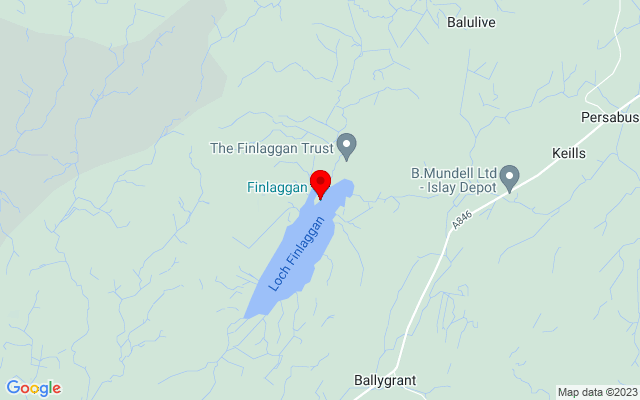 Get your Islay tour tickets here.

Getting around: Some easy-access paths. Some uneven paths. Partial pushchair access