Jura is an island in the Inner Hebrides close to the Isle of Islay. There are only 200 inhabitants living across the island’s 142 square miles which makes Jura one of the least inhabited places in Scotland.

Visitors can explore the open landscape by taking a ferry from Port Askaig and cycling or driving around the A846 which offers an enjoyable journey along the east coast of the island.

Discover the Isle of Jura with this visitor guide which includes an overview and lots of useful visiting advice.

Just like the Isle of Eigg, the Isle of Jura is often considered to be one of the wildest and hardest-to-reach places on the west coast of Scotland – even though it’s only 60 miles from Glasgow as the crow flies.

This remote dot of land in the Inner Hebrides is a mere 10-minute ferry ride from the tourist-hotspot Isle of Islay, yet it seems to be frequently missed by visitors who are more concerned with taking selfies than experiencing the delights of one of Scotland’s most remote islands.

And Jura is certainly remote. Just 200 people live on this impossibly pretty isle – many of them employed in the fishing industry – with the village of Craighouse housing a large percentage of the population.

Not that Craighouse is a large village (it’s actually tiny) but there’s a distillery sited in the centre of it along with a hotel that overlooks a very picturesque beach, so it’s certainly worth visiting if you ever decide to take the ferry from Port Askaig to explore the remarkable landscape.

Although Jura is quite small at 142 square miles it’s absolutely full of wildlife and a visit will almost certainly guarantee sightings of herds of red deer, whose numbers currently hover around the 5000 mark. That’s pretty impressive when you consider that deer on Jura outnumber humans 25 to 1!

But it’s not just the animals that make Jura worthy of a visit as the scenery is absolutely drop-dead gorgeous. Not quite the eyeball-popping landscape you’ll find on Skye, but wild, open, and atmospheric all the same.

When I first arrived at the tiny Feolin ferry terminal I wasn’t quite sure what to expect because, as is usual, I picked the one day out of the entire week when the weather turned decidedly wet.

A heavy mist hung in the air and the skies were grey and foreboding – not exactly an inviting scene when you’ve come to an island to explore its beaches.

My intention was to drive to the distillery in Craighouse, dump the car and set out on foot to see what was on offer, but the incessant drizzle seemed determined to put a stop to my plans.

However, just as I was considering turning around and heading back to the safety of Islay a remarkable thing happened.

The clouds parted almost directly above me and a ray of sunshine shone down, laser-like in its focus.

Now I’m not a religious man, far from it in fact, but to me this was a sign that I had to stay on Jura, and as the clouds lifted minute-by-minute I knew this trip was going to be a good one.

By the time I arrived at the Jura distillery the skies were blue, the sun was shining, and the winds had dropped to a whisper, setting the scene perfectly.

Speckles of sunlight danced across the water and palm trees (yes, palm trees!) waved gently in front of the Jura hotel. It was utterly, completely, and totally perfect.

Chief amongst the attractions on Jura on are The Paps – three iconic mountains that dominate the vista for miles around.

Although they’re not quite Munro status (a Scottish mountain over 3,000 feet), The Paps are certainly impressive and it would be a fair trek to get to their respective summits, especially the tallest of the three – Beinn an Oir – which stands tall at 2,576 feet.

That plants it firmly in Corbett territory (a mountain between 2,500 and 3,000 feet) so if you’re a ‘Corbett bagger’ a trip to Jura might be worth it for that fact alone.

Other attractions include the famous Corryvreckan whirlpool which can be found a short boat ride away to the north.

The whirlpool is a natural phenomenon caused by strong tidal flows washing between the islands of Jura and Scarba and as the water speeds over a deep hole in the seabed it creates a roaring whirlpool on the surface which is in fact the 3rd-largest in the world.

It’s a spectacular sight that’s also surprisingly noisy so it’s quite an exciting thing to watch, but I certainly wouldn’t advise going out there on your own. Divers frequently cite the Corryvreckan as one of the most dangerous stretches of water in the British Isles, and having witnessed it myself I can see why.

You can take boat tours to the whirlpool from both Islay and Jura, but I recommend Jura Boat Tours who have a fast (and great fun) RIB to get you there and back in double-quick time.

Heading back to land you might be surprised to discover there’s a distillery on Jura but it has been producing casks of their incredibly tasty single-malt since the distillery was founded all the way back in 1810.

Jura whisky ranges in flavours from non-peated to heavily peated so it manages to bridge the gap between the sweet floral notes of mainland whisky and the often medicinal whisky produced on Islay.

I tried a few samples during my visit and I can totally recommend both ‘Origin’ (honey finish) and ‘Prophecy’ (peat finish) if you’re after a decent dram or three.

You can join a distillery tour when you visit (around £10 per person) which is well worth taking the time for, but note that booking is essential so don’t get there and expect to immediately join the tour.

Instead, go to the Jura distillery website and fill in your details 24 hours beforehand to reserve your space, and remember there’s a good chance you’ll get a sample or two during your visit so you won’t be able to drive afterwards.

One option for an overnight stay is to book a room at the Jura hotel next door which features fantastic views overlooking the harbour where you’ll be treated to an almost untouched landscape of sandy bays and deep-blue water, guaranteeing a memorable evening watching the sunset with a fine whisky in hand.

The rooms are a bit basic by modern city standards but they’re clean and comfortable and the food in the restaurant is excellent so I totally recommend you consider the hotel for at least one night, especially considering the prices are very reasonable as well. Check out the Jura Hotel website for availability.

Another recommended place to stay (but not by me as it currently costs £1000 a week!) is Barnhill farmhouse located on the far north of the island. This house was a favourite retreat for George Orwell and it’s so remote you’ll need a 4×4 to get there.

Orwell was so taken with the remoteness of this part of the island that he wrote 1984 while staying there, so if you’re a fan of the author you might consider making a booking – though you’ll be relying on a generator for electricity and a coal-fired heater for hot water.

I wasn’t lying when I said that part of the island is remote!

The rest of Jura can be explored fairly easily if you take a car on the ferry but note that the roads are single track with few passing places and not too many safe spots to park due to the vast swathes of spongy blanket bog that covers the majority of the island.

That being said, one walk that’ll show you some of the best sights crosses both coastlines on a 5-mile circuit from Loch Tarbert on the west coast to Tarbert Bay on the east.

There’s a small parking area at the Loch Tarbert side where you’ll be able to set out to explore Juras rugged coastline, windswept fields and sandy beaches, but while you’re enjoying the hike keep your eyes open for the golden eagles, otters and seals that thrive in the area.

I downloaded the route map from walkhighlands.co.uk before I left but a better option is to get a waterproofed paper map from Ordnance Survey which covers the entire island.

OS maps are first-rate and they’re well worth getting if you plan to see more of this remarkable landscape on foot. Buy OS Landranger maps direct from Ordnance Survey.

If thoughts of the Isle of Jura has whetted your appetite for Scotland’s west coast islands you might like to read my guides to Islay, Mull, Tiree and Arran.

The Isle of Jura,
The Inner Hebrides,
Scotland

To get to the Isle of Jura you have to take a ferry crossing from Port Askaig on the Isle of Islay.

To get to Islay you can either take a flight from Glasgow International Airport or you can take the mainland ferry from Kennacraig to Port Ellen and Port Askaig. 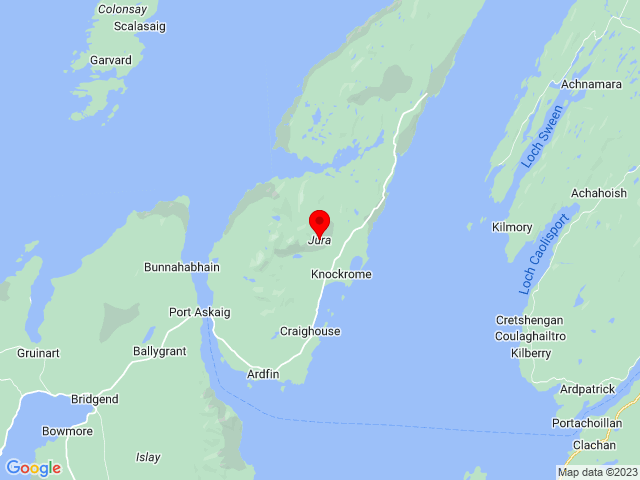 How do you get to the Isle of Jura?

The most popular route to the Isle of Jura is taking a ferry from either of the mainland ports of Kennacraig or Oban to the Isle of Islay, then taking the small car ferry from Port Askaig on Islay to Feolin on Jura.

How much does it cost to visit the Isle of Jura?

There is no fee to visit the Isle of Jura other than ferry costs. See the Calmac website for details.

Why are they called the Paps of Jura?

The name ‘pap’ originates from an old Norse word meaning breasts. The mountains were given the name ‘Paps of Jura’ due to their appearance.

What visitor facilities are there on the Isle of Jura?

Visitor facilities are limited on Jura. The main settlement is Craighouse, which has a village store and a hotel with a restaurant. The newly-opened Ardfin golf estate has luxury accommodation and a restaurant.