Ben Hope is a 3,170-foot Munro (a mountain over 3,000 feet) in the Sutherland area of Scotland. The mountains is best known for being the most northerly peak in mainland Britain and it offers a superb hike into the Highlands with spectacular views from the summit.

Ben Hope is the most northerly Munro in Scotland, rising 967 metres (3,170 feet) south-east of Loch Hope in Sutherland.

This is an area known as the Flow Country – a wide, open stretch of peatland – that has the prestigious title of being home to the largest expanse of blanket bog in Europe.

It’s also home to the Forsinard Flows national nature reserve that covers more than 21,000 hectares of land and has a diverse range of birds, insects and reptiles living in it.

No wonder then, that this area is referred to as the last great wilderness in Europe.

Standing majestic amongst this seemingly desolate landscape is Ben Hope and it’s not really surprising that the mountain is a popular spot for Munro-baggers as the views all along the trail leading to the top are pretty much drop-dead spectacular.

To the west of Ben Hope lies the wide valley of Strathmore that runs north-south and has a minor road running alongside it, with the Strathmore River flowing through the valley on its way to Loch Hope and the North Sea beyond.

The road offers a lovely drive and you can approach it from either the north or south, but when you get roughly halfway along it be sure to stop off at Broch Dun Dornaigil which lies a couple of miles south of the Ben Hope car park.

This broch dates back at least 2,300 years and stands an impressive 7-metres high in places so it’s a great place to take a selfie or two with the Strathmore valley in the background.

Unfortunately, the interior has been filled in with collapsed rubble from the long-since crumbled roof so you can’t go inside it, but it’s an interesting diversion on your way to Ben Hope nonetheless.

Heading back to the car park of Ben Hope you’ll get your first glimpse of the mountainous peak that awaits you, and with the tumbling waterfalls of the Allt-na-caillich burn cascading in front of you and alpine flowers spreading out around the base of the valley it has to be one of the most beautiful places in northern Scotland.

Read on to find out more about Ben Hope and the route to the summit.

Things to do at Ben Hope

This mountain can be enjoyed either at it’s lower grassy levels or all the way up to its rocky plateau, so it really depends on your level of fitness when deciding how you want to spend your time there.

The first part of the trek to the top is quite steep but eventually opens up to a wide, flat area and you could quite easily take a picnic there and just enjoy the views across the surrounding countryside.

Getting that far is an achievement in itself as the mountain is pretty unforgiving on its lower section and to be honest I wouldn’t even try to attempt it if you’ve got children under 10 with you.

But if you’ve got a family that’s a bit older you might find a trek to the summit is a great way to enjoy a bit of family bonding, and the views at each step of the way are exceptionally pretty.

Well, they are on nice sunny days at least, but if you take a look at the photos in this article you’ll see that a quick change in the weather can make conditions on the mountain pretty miserable, and if the clouds roll in you can forget about seeing anything from the trig point at the top.

If the weather looks like it’s going to be rather changeable I suggest saving this mountain for another day as you’ll likely miss out on seeing Sutherland in all its glory.

But then again if you’re one of those sporty adventurous types (no doubt with arms bigger than my legs) you’ll probably get a buzz out of reaching the top no matter what Scotland’s famously changeable weather decides to do.

You should consider planning for between four to six hours to complete the return ascent/descent which is actually only around 5 miles in total.

Unfortunately, the path has to almost double back on itself in a couple of places to avoid a few crags in the mountainside, otherwise you’d be able to reach the summit in half the time.

I’d say half of the walk is on grass (which was a complete muddy quagmire when these photos were taken) and the rest is on fairly loose rocky scree, so whatever you do make sure you’ve got good weatherproof gear with you, and wear decent boots.

I specifically bought a pair of Berghaus boots from Amazon for this walk and they were fantastic. Lots of grip and ankle support and totally water-resistant. They were pricey, but you get what you pay for.

Before you set off bear in mind there are no facilities for miles around in any direction so make sure your phone is charged up, you’ve got a backpack (these are good ones) full of food, and chuck a couple of bottles of water in there for good measure.

Believe me, once you start climbing this steep mountain you’re going to work up a heck of a thirst and you’ll be ravenous for that clingfilm-wrapped ham and cheese sarnie that’s been squashed at the bottom of your bag.

Out of all the places to visit in Scotland I have to say Ben Hope is up there with the best, mainly because the views the entire way to the top are absolutely beautiful. If you want to attempt it I’ve included a mini-walking guide further down this page, or take a look at the Walk Highlands website for route details.

If you’re looking for more inspiration for things to do during a visit to the north of Scotland read my Complete Guide to the Scottish Highlands. 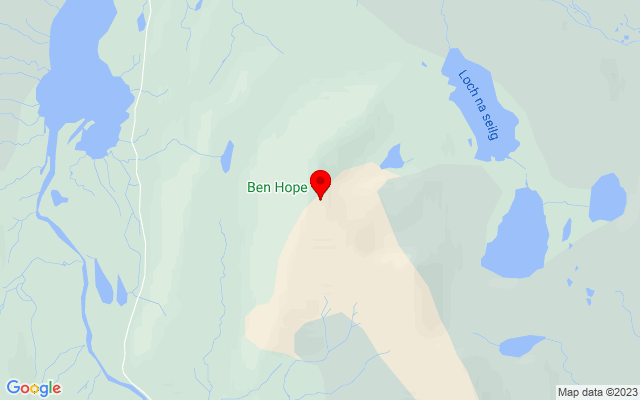 The walk to the top of Ben Hope is fairly easy to follow but it’s quite hard going in places – especially the first section before the southern ridge – but there are several marker cairns along the way to keep you on the right track and as it’s such a popular hike you’ll no doubt find fellow walkers along the way to offer advice if you’re not sure where you’re going.

The start of the walk is at the Ben Hope car park in Strathmore which is easy enough to find if you turn off the A838 at the northern end of Loch Hope.

From there follow the single-lane road till you reach a bay opposite an animal barn that has space for around 5 cars. A sign greets you proclaiming ‘Way up Ben Hope’ with a path heading towards the Munro through a fairly level field.

Be warned though, the difficulty ramps up quickly and gets quite steep early on into the hike, but rest assured it eases off further up.

To your left is the tumbling waters of the Allt a’Mhuiseil burn and the path follows alongside it for the first half-hour of the walk before zig-zagging around a few crags, but at least you’ll get ample opportunities to look back at the rising peaks of Strathmore in the distance.

Once you’ve cleared the first steep climb you’ll emerge onto a wide grassy shelf on the southern ridge of Ben Hope. This area will give your legs a rest but it gets ferociously muddy after a downpour so I hope you remember to wear decent walking boots in case the skies start to darken.

As the path continues its zig-zag line upwards you’ll reach the first false summit, and it’s here where you’ll notice the grass giving way to barren rocks. It’s a mild scramble from here on in and the slope of the western escarpment pitches at another steep angle, but at least there are a few cairns along the route to keep you pointed in the right direction.

Once at the plateau you’ll see the trig point at the highest point on Ben Hope surrounded by a wind shelter cairn, so if the wind isn’t too ferocious it makes a good spot to munch a sandwich while looking across the wilderness, complete with mountainous ridges and lochs to the east.

Food eaten, it’s now time to make your way back down to the car park, with the return route basically following the exact same trail you made your way up on.

Things to do near Ben Hope