The mountain of Ben Lawers is located in a nature reserve near Loch Tay in Perthshire. It is the 10th-highest Munro in Scotland at 1,214 metres and it is a popular destination for advanced and beginner mountain walkers alike thanks to the car park mid-way up it that offers a shortcut to the summit.

Scotland’s 10th-highest Munro is one of Central Scotland’s most popular tourist hotspots, famed not only for the fantastic walks to the summit but also for the wonderful views visitors get to enjoy along the way.

Ben Lawers is actually just one of seven peaks in the Ben Lawers National Nature Reserve but it boasts the title of being the tallest, with its highest point an impressive 1,214 metres above sea level.

This nature reserve is an exceptionally scenic place and it has to be my favourite area in Central Scotland because not only do you get to experience the wonders of the Ben Lawers and Tarmachan mountain ranges but you’re also just a stone’s throw away from tranquil Loch Tay.

As a place to get outside and enjoy nature, the Ben Lawers National Nature Reserve takes some beating.

It covers a large area as well at an incredible 4,500 hectares, but while many stretches of Scotland’s wilderness are quite barren, this nature reserve in Central Scotland absolutely teems with wildlife.

Walking along Ben Lawers many trails will give you unparalleled wildlife spotting opportunities and you’ll often see many of Scotland’s most popular animals along the way.

Red deer, ptarmigan, grouse, skylarks and many more are almost always out in force (along with the midges in summer, unfortunately) and the area has been a firm favourite with wildlife photographers for years.

The reserve is famed for the incredibly varied plant life that thrives on the mountain slopes and most of the seven Munro’s are completely covered in a variety of arctic-alpine plants the like of which you’ll struggle to see anywhere else in Britain.

Visit in summer and you’ll be blown away by the dazzling colours of the heather and gorse bushes, with the heather sweeping up the mountainside in great swathes of purple and the gorse providing thick cover elsewhere.

Gorse (also known as Whin) flourishes in this part of Scotland and you’ll frequently smell the gentle vanilla aroma of its bright yellow flowers as you make your way along the trails on Ben Lawers. With the sun shining, the scent of the gorse all around and the stunning backdrop of Loch Tay filling your field of view it has to be one of the most scenic spots in Scotland.

Thankfully, such an idyllic region is cared for by the National Trust for Scotland who maintain not only the landscape but also carefully manage it for current and future generations to enjoy.

From the reasonably priced car park half-way up the mountainside to the frequent signposts and markers, they’ve managed to make the Ben Lawers range accessible for all and some parts of the lower trails are even accessible to wheelchair users which is an incredible accomplishment.

If you want to plan a route before you arrive I suggest checking out the NTS website before you leave home as there’s a selection of handy downloadable trail guides that are worth putting on your phone, but failing that you should pack an OS map in your backpack to ensure you don’t end up getting lost. Buy OS Landranger maps direct from Ordnance Survey.

This is a mountain range that’s begging to be explored, and you can do just that – to a certain extent. The NTS has gone to great lengths to rejuvenate the reserve with a number of schemes to reduce the impact people are making on the landscape, which includes asking that you keep to the paths.

While some might find it restrictive I personally think there’s no need to deviate from the paths anyway as they run through the prettiest parts of the mountain range and they’re very well maintained.

Still, if you’re the type of person that likes to get off the beaten track you might like to bear this in mind before setting out on foot.

The trails on offer from the car park are categorised as lower and upper, with the lower ones offering easy walks with views over Loch Tay and the upper ones being a bit more of a challenge but with the possibility of seeing the most wildlife.

If you’ve got children I suggest trying the lower routes first as they’re still enjoyable but are short enough that little legs won’t get tired, with the two most popular – the Edramucky and Kiltyrie trails – being just over a mile in length.

The Edramucky trail is possibly my favourite as there’s such a wide variety of animal species to discover as you make your way along it, so you might like to follow the ‘caterpillar trail’ which aims to show enthusiastic youngsters all the creepy-crawly insects you’ll find in these parts.

The more adventurous will most likely prefer to bag all seven Munros, but if you just want to reach the summit of Ben Lawers then you can either start at Loch Tay or begin your ascent from the high-level car park.

The path from the car park is easy going for the majority of its length and shouldn’t pose any difficulty for moderately experienced walkers but I’d plan on giving yourself at least 5 hours to complete it.

As the NTS has done such a fine job of maintaining the paths it’s quite a simple job to navigate your way to the summit but don’t be deceived into thinking the first mountain you see is Ben Lawers.

It is, in fact, Beinn Ghlas which is a decent climb in itself at 1,100 metres and you have to cross over its peak before you can see the highest point in the range, though it’s really not difficult to get there.

The plateau at the top of Ben Lawers is signified by a trig point and from there you can decide whether you want to continue onwards to the Munros of An Stuc and Meall Garbh or head back the way you came to the car park.

If you’d like to visit another stunning Scottish mountain read: The Complete Guide to Visiting Schiehallion, or if you’d prefer to walk through the nearby Tay Forest Park read my Guide to the Best Forest Walks in Scotland. 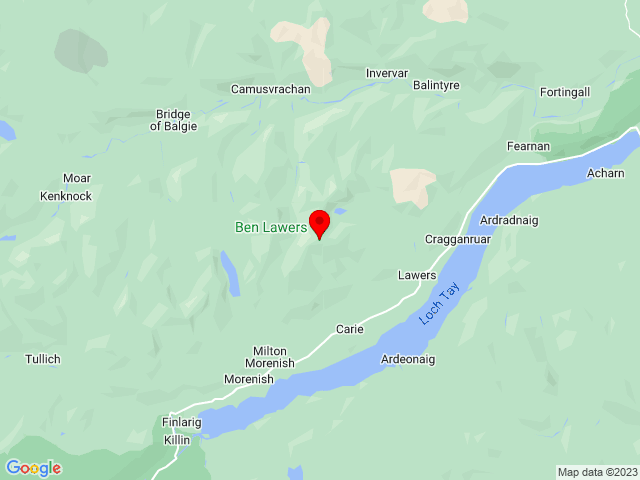 Things to do near Ben Lawers

How long does it take to walk up and down Ben Lawers?

Ben Lawers is widely regarded as one of the easiest Munros to climb, with the 6.75-mile return route taking approximately 4-6 hours to complete. The mountain is the 10th-highest in Scotland and has a summit of 3,984 feet.

Can you take a dog up Ben Lawers?

Ben Lawers is an accessible peak in the Central Highlands, and the shallow track to the summit is possible for most dog breeds. Note that there is often livestock on the hills surrounding Ben Lawers so all dogs must be kept under control as advised in the Scottish Outdoor Access Code.

How much is the car park at Ben Lawers?

How many Munros are in Lawers range?