Bidean Nam Bian in the Highlands

Located on the south side of Glen Coe, Bidean Nam Bian is the highest mountain in the county of Argyll. It stands tall at an impressive 1150m elevation and is a favourite with beginner and advanced hill walkers.

Bidean Nam Bian, located to the south of Glen Coe in the Scottish Highlands, is well-known amongst hill walkers and munro-baggers for the fantastic views it offers from the ‘Three Sisters of Glen Coe’ – the three steep ridges on the north face that extend into the Glen.

This enormous series of peaks is part of the highest mountain in the old county of Argyll, rising to 1150 metres at its highest point with several ascending routes of varying difficulty, though the easier path from Glen Coe car park is by far the most used (you can see this route in the map shown further down this page).

To my mind this is one of the most beautiful, picture-postcard-perfect areas of the Highlands and if you’re intent on exploring the mountainous regions of Glencoe you absolutely have to put Bidean Nam Bian somewhere near the top of your list of places to visit.

You may also like...  The Complete Guide to Visiting New Lanark World Heritage Site in South Scotland

Bidean Nam Bian offers a fantastic walk on a clear day where you’ll be able to see for miles across this spectacular part of the Scottish countryside, although it’s not quite so enjoyable when the weather closes in.

It’s quite a tough scramble in places so I’d suggest you give it a miss if you’re not physically fit and able, and I definitely wouldn’t attempt it if you’ve got kids in tow. That being said it’s well worth the effort if you want to explore this part of the Highlands and I guarantee you’ll enjoy the view once you get near the top.

Things to do at Bidean Nam Bian

Two of the peaks of the three sisters, Beinn Fhada and Gearr Aonach are separated by a partly concealed glen known as the lost valley, which at one time was used by Clan Macdonald to hide their livestock from thieves but is today mainly used by hikers making their way up to the Bidean ridge.

The most popular route up into the mountains heads out over a 2.5-mile path starting at the Glen Coe car park near Loch Achtriochtan and finishing at the peak of Stob Coire nan Lochan.

This route is quite busy at times so during the summer it’s probably best to avoid it at weekends, especially as the car park gets clogged up with coachloads of tourists visiting the nearby loch.

The path is easy-going at the start but it becomes a fairly tricky scramble across several rocky sections in the middle, although the views at the finish point two-thirds the way up the mountain make up for the hard work needed to make the ascent.

You may also like...  The Complete Guide to Visiting Up Helly Aa in the Shetland Isles

Part way along the route you’ll come across an impressive waterfall thundering down the mountainside while the wooded ravine following the path makes a great place to stop and take a breather, but be careful if you try to get down to the pool under the waterfall as it’s very slippery.

The path continues up in the direction of Stob Coire nan Lochan where you’ll find another waterfall in a small box canyon before exiting out onto the summit of the north ridge.

From here you’ll get amazing views in all directions and you can either head back down to the car park or push on further into the mountain range towards the 1150 metre summit of Bidean Nam Bian.

You may also like...  The Complete Guide to Visiting Fort George in the Highlands 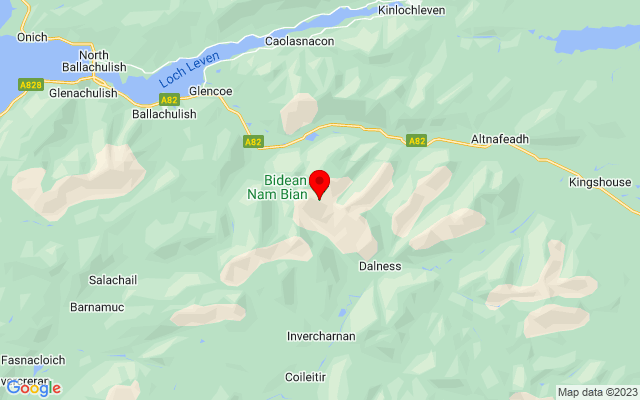 The terrain is steep and rocky but shouldn’t be too difficult for anyone with average fitness levels, although you’ll find sections of loose scree towards the top that make for quite a difficult scramble.

Start at the Glen Coe car park near Loch Achtriochtan and follow the path to the old track at the bottom of the glen, then head to the footbridge that crosses the River Coe and head towards Coire nan Lochan.

The path offers a nice walk through heather-lined fields and it’s easy to follow as it’s quite well-worn and simply follows the stream that runs off the mountain. Be aware that part of this path crosses large boulders that require quite a climb so if you get halfway up and find hopping over the first boulder is too difficult I suggest you turn around as it doesn’t get any easier from there on.

If you’re able to continue you’ll pass a couple of waterfalls before reaching a small level area that overlooks Glen Coe. This is a perfect place to stop for a picnic but if you want to continue up the steep scree-strewn path you’ll shortly reach the summit of Stob Coire nan Lochan where you can continue along a fairly easy incline towards the summit of Bidean Nam Bian.

There is no fee to visit Bidean Nam Bian. The site is open to visitors 24/7, depending on weather conditions.

You may also like...  The Complete Guide to Visiting Iona Abbey on the Isle of Iona

Getting around: Uneven paths The Complete Guide to Tubing at the Midlothian Snowsports Centre