I have to admit I didn’t visit one of the most photographed castles in Scotland until recently (2019), mainly because I’d become so sidetracked by the other attractions nearby that it completely slipped my mind.

Kilchurn Castle can be found just off the A85 at the northernmost point of Loch Awe, more or less midway between the Trossachs National Park and the Highland coastal town of Oban.

This is an area that’s every bit as spectacular as Skye in my opinion but it has even more interesting places to visit, with lochs, mountains and tourist attractions a-plenty in pretty much every direction you head to.

Loch Awe itself is an awesome (Loch Awesome?) place to visit with lots of wee islands and inlets to explore around every corner, but the best way to experience it is to get off the A85 and follow the A819 and the B840.

These roads follow the loch in its entirety and they offer plenty of places to get out the car and go exploring. The A819 is also the road you have to follow to get to the Kilchurn Panorama viewpoint which has to be up there with Eilean Donan for atmospheric views.

You may also like...  The Complete Guide to Visiting the Isle of Tiree

Nearby to Kilchurn you’ll find St. Conan’s Kirk (one of the prettiest chapels in Scotland) and the mighty Ben Cruachan mountain, while the ‘Hollow Mountain‘ visitor experience is just a few miles further down the road.

It’s safe to say there are loads of other places to visit in the area but if anyone was to ask me I’d say Kilchurn Castle is the most scenic of the lot.

Although it’s now a ruin, this still-impressive fortress was at one time the powerbase of the Campbells of Glenorchy, a clan that almost rivalled the earls of Argyll at the height of their power.

The exact date the castle was built is unknown but it’s believed to have been constructed sometime in the mid-1400s by the 1st Lord of Glenorchy, Sir Colin Campbell.

The castle was extended in the 1500s with a lower hall and turrets being added to the original five-storey tower house, but by the late 1680s it had ceased being used as an ancestral home.

At that time it was converted into a military garrison with a purpose-built barrack block in the north of the main courtyard, but due to the fact it didn’t see much use it was eventually abandoned for good in the late 1700s.

What remains today is a derelict (but very atmospheric) Scottish castle that might not be particularly impressive if it was situated anywhere else, but thanks to its position at the head of Loch Awe it’s become something of a ‘must-see’ historic site on most organised coach tours.

You may also like...  The Complete Guide to Visiting The McManus Museum in Dundee

When you visit don’t be surprised to find yourself caught up in a crowd of excited camera-wielding tourists as the place seems to be getting ever more popular with each passing year, but get there early in the morning and you’ll be rewarded with spectacular views in a 360-degree panorama that begs to be photographed.

To find out what else the castle has to offer read on.

Things to do at Kilchurn Castle

Arriving at the Kilchurn Castle car park you’ll find that it’s actually quite well catered to visitors with plenty of parking space, decent paths, and a really (really, really) tasty food van. It’s a bit of a walk to the castle through marshland but it’s well worth the effort, even if you do get eaten alive by midges during the summer months.

Prior to entering the marshland you’ll pass a wee cabin with a local photographer who’s set up shop there, and there are a few friendly Highland Cows to say hello to as you walk past.

You’ll see the castle in the distance from this point as well as the surrounding mountains, most noticeably Ben Cruachan which provides a fittingly dramatic backdrop against the usually grey Scottish sky.

It’s a 5-10 minute walk to the castle (which is maintained by Historic Environment Scotland) but for some reason there’s no entrance fee to get in. However, it’s also unmanned so you might well arrive and find the castle door firmly closed and locked.

But arrive when the castle is and open you’ll be able to walk inside and wander around the roofless ruins of the old tower house and barrack block as well as climb the short stairs to the top of the lookout towers.

The tower overlooking Loch Awe should be your first point of call as it’s there where you’ll get the best views of your visit – especially if you look through the windows when the sun is low in the sky and the light is reflected off the glass-like loch. It’s a gorgeous scene and one that I guarantee will stay in your memory for a long time.

You may also like...  The Complete Guide to Visiting Crichton Castle in Midlothian

There’s not much else to do inside the castle and to be honest I’d plan no more than an hour for your visit, but you can at least follow the path outside the castle walls that runs down to the loch shore for a closer look.

The foot of the loch is a great spot to take a few photos but as Kilchurn is a landlocked island you can’t go any further so you’ll have to return to your car after you’ve finished with your camera, but thankfully there are plenty of other places you can visit in the vicinity.

I already mentioned St. Conan’s Kirk, Ben Cruachan, and the Hollow Mountain Experience, but if they don’t tickle your fancy I recommend checking out Bonawe Iron Furnace near Taynuilt to the west or a walk up Ben Lui to the east.

All are fantastic attractions, and all will nicely round off a visit to Kilchurn Castle. Kilchurn Castle is located at the northeast end of Loch Awe, 2.5 miles west of Dalmally off the A85.

You may also like...  The Complete Guide to Visiting the Glencoe Visitor Centre in the Highlands 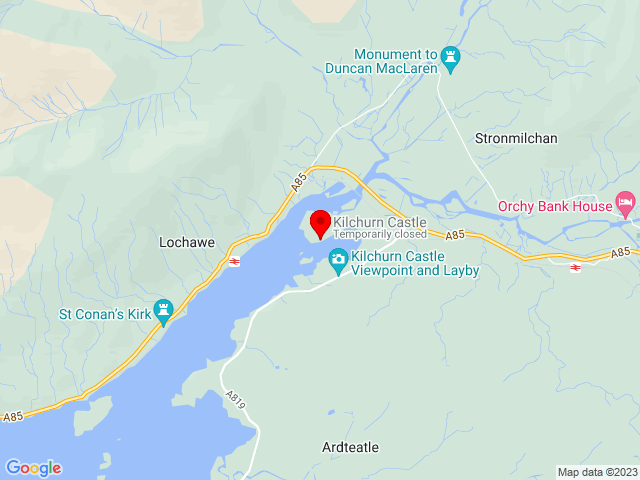 Getting around: Easy-access paths from the car park to the castle, Pushchair access, Stairs, Uneven paths

On-site conveniences: No facilities in the castle. Private gift shop at the castle entrance. Private food van in the car park The Complete Guide to Visiting Dean Village in Edinburgh Please note there may be disruption to externally linked operators during the Coronovirus outbreak. Visit the gov.uk website for advice.

Hi! I’m Craig (that’s me on the left), I’m a bit of a travel geek and I love exploring Scotland. In this website I’ll show you everything you need to know about the best Scottish attractions and places to visit. Follow my adventures on Pinterest, Facebook, and YouTube.