Loch Ness is one of the most famous, most visited, and most photographed tourist attractions in Scotland.

It is best known for the mysterious monster that’s rumoured to live in the loch’s 230-metre depths but it is also a popular tourist destination with visitors who come to sail along it on pleasure cruises.

Loch Ness is without a doubt one of the most famous, most visited, and most photographed tourist attractions in Scotland.

Not only is there an abundance of wildlife living both in the loch and along its banks but there’s a rich history to be discovered thanks to famous nearby attractions like Urquhart Castle and the city of Inverness.

There are lots of pretty villages dotted along its 23-mile length including Fort Augustus on the southern edge (which is a favourite stopping-off point with tourists looking to explore the loch) and many sight-seers try to spot the elusive Loch Ness monster as they stand on the shoreline.

But the best way to enjoy Loch Ness is to take one of the many cruise boats that sail up and down the loch each day while soaking up the atmosphere of this picturesque body of water.

Although Ness isn’t the largest loch by surface area (that crown goes to Loch Lomond), thanks to its 230m depths it is the largest by volume, a fact that has supported reports that a monster is able to evade capture by hiding deep at the bottom of freshwater crevices.

In fact, Loch Ness is so large that it contains more fresh water than all the lakes of England and Wales combined.

Tourists wishing to explore the loch can take advantage of frequent cruise boats which ferry passengers up and down the loch while walkers can enjoy the many popular trails that run along the water’s edge, such as the lovely Fort Augustus Heritage Trail.

History fans will enjoy stopping off at the 13th-century Urquhart Castle (learn more about it with my Guide to Urquhart Castle) on the western edge of the loch, where fantastic views across the water can be enjoyed while exploring the ruins of one of the largest medieval fortifications in Scotland.

Moving further north you’ll come across Inverness – often referred to as the capital of the Highlands – where visitors will find the beautiful River Ness that eventually feeds into the dark, peaty waters of the loch.

The many rivers that flow into and out of the loch are an integral and much-enjoyed part of the Ness experience with the Rivers Ness and Oich being particularly popular with tourists.

One of the most popular sailing routes in Scotland can be found in these rivers with sailors frequently passing through Loch Ness as they tour along the Caledonian Canal, the 60-mile waterway that runs from Beauly Firth on the north-east coast of Scotland to Loch Linnhe on the west coast.

Fisherman keen to catch some of Scotland’s largest fish will find several species living in the water of Loch Ness, with the famed Scottish Atlantic Salmon living alongside Brown and Sea Trout, Perch, Roach and Char, while golf enthusiasts will find the nine-hole course at Fort Augustus to be one of the most challenging in Scotland.

A top-tip I have for you is to take a visit to the five-star rated Loch Ness Centre and Exhibition at Drumnadrochit where you can learn all about the loch, the history of the surrounding area and the legend of the fabled monster.

Discover the attraction in detail with my Complete Guide to The Loch Ness Centre and Exhibition.

Loch Ness extends for 23 miles south of Inverness and there are plenty of locations from which to explore it. Perhaps the most frequently visited entry point is Fort Augustus at the southern-most end.

Fort Augustus can be found on the A82, at the head of Loch Ness in the heart of the Highlands. It is 33 miles from Fort William and 34 miles from Inverness. 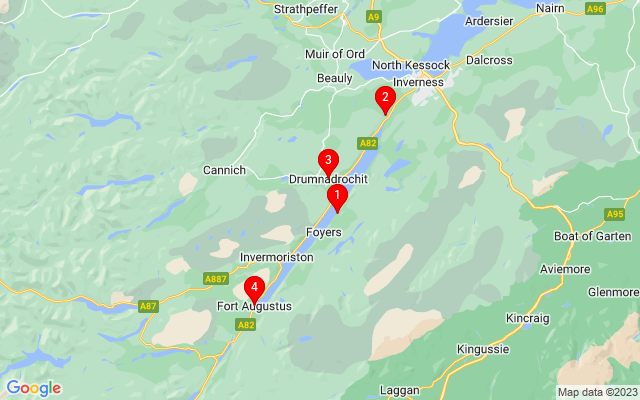 Things to do near Loch Ness

Does Loch Ness freeze in winter?

Loch Ness does not freeze in winter due to its extreme depth which causes the water at the surface to constantly cycle with the water underneath. The loch therefore has a near-constant temperature of 5 °C.

The only places on Loch Ness where it occasionally freezes is the shallowest edges near the shoreline.

Can you swim in Loch Ness?

It is possible to swim in Loch Ness, but it is not recommended. Due to its depth (745 feet at its deepest point) the water of Loch Ness stays cold throughout the year with an average of just 5 °C – even in the height of summer – and entering the water can induce hypothermia in untrained swimmers.

Is Loch Ness the deepest lake in Scotland?

Loch Ness is the largest body of water by volume in Scotland. In fact, there is more freshwater in Loch Ness than all the lakes of England and Wales combined.

What is the difference between a loch and a lake?

There is no physical difference between a lake and a loch. Both are bodies of water. The only difference is the ‘word’ loch is the Scottish terminology and ‘lake’ is the English terminology.