The small but beautiful Isle of Eigg lies 10 miles off Scotland’s west coast. The island has a fascinating history, superb wildlife and a vibrant community. Eigg is one of the few islands that is privately owned and visitors are welcome to explore it via the frequent ferries that sail to it from Mallaig and Arisaig.

Review of the Isle of Eigg

The Isle of Eigg is one of the smallest Hebridean islands on Scotland’s west coast (it has a total area of only 12 square miles) but it also has some of the most diverse landscapes in the country, and in my opinion it’s totally underrated as a tourist destination.

This remote island is one of the least-visited western isles – which is surprising seeing as it’s so close to the ever-popular Isle of Skye – but its small tourism industry only adds to its charm and I honestly believe a visit there is a must if you want to experience a side of Scotland that’s a world apart from the hubbub of the big cities of Glasgow and Edinburgh.

The minimalist theme continues right down to the name given to the archipelago that Eigg lies within, and I bet if you’re an international visitor to our shores you’ve never even heard of Scotland’s Small Isles (but well done if you have).

In case you were wondering, you might like to know that the Small Isles consist of Canna, Muck, Rum and Eigg, all of which lie to the south of the Isle of Skye and to the north of the Ardnamurchan Peninsula.

While Eigg is considerably smaller than Rum it’s larger than both Canna and Muck, although at only 9km long from north to south and 5km wide from east to west it’s not exactly big, but what it loses in landmass against other Scottish islands it more than makes up for with its beauty and character.

There’s a whole heap of reasons why I think you should visit Eigg but first and foremost has to be the scenery you’ll find once you leave the ferry and step foot on dry land.

There are lots of immaculately clean white-sand beaches on this small outcrop of land (check out Laig beach – it’s fantastic), and An Sgurr – the vast mountain pinnacle that dominates the landscape – offers some of the best views in Scotland.

But perhaps even better than the scenery is the solitude you’ll find as you explore the island.

There are only around 100 inhabitants on Eigg so it’s a perfect place for travellers looking to find some peace and quiet, and the few locals you do meet are warm and welcoming.

The summer months admittedly see an increase in the number of visitors thanks to the ferry routes from the mainland fishing port of Mallaig and the village of Arisaig in Lochaber, but even so it’s remarkably quiet even in the peak tourist season.

Things to do on the Isle of Eigg

One of the most interesting things about Eigg is that it’s owned and managed by a trust that comprises a number of the local residents as well as the Scottish Wildlife Trust and the Highland Council.

Between them they’ve managed to increase the population of the island from around 65 to just over 100 in the last 7 years.

Not a huge population by any means, but then this is an island that thrives on staying small enough to sustain itself – which can be seen in the fact that it’s completely powered by renewable energy. That’s something the highly populated areas of Scotland could only ever dream about. Go Eigg!

If you manage to get onto the island to explore it for yourself you’ll find a few modern amenities that cater to visitors like the restaurant and bar near the ferry jetty. But the best reason to go there is to get your walking boots on and explore it on foot.

That’s really the only way you’re going to get to see the majority of the birds that live on Eigg and if you take your binoculars you’ll be in for a treat as the island has breeding populations of falcons, kestrels, owls and even golden eagles swooping over the majority of its landscape.

It really is a fantastic place to visit if you’re a bird-watcher, or even if you’ve just got a love of the great outdoors.

Arguably the remotest part of this isle is the moorland plateau in its centre which rises an impressive 400 metres above sea level at An Sgurr, which is an enormous sheer-sided pitchstone pinnacle that dominates the island and offers amazing views from the top.

It’s possible to walk up to the top of this rocky outcrop and if you do you’ll be able to see right across to the Isles of Mull, Coll, Muck, Rum and Skye – at least in good weather. Try this climb on a misty day and the views will be a lot less interesting.

The beaches on Eigg are definitely worth exploring too, and although they’re small they’re perfect for sitting on and letting your worries drift away.

You’ve got a few options for beach-side relaxation but I recommend you visit Laig beach for the mesmerizing fern-like patterns that change with the motions of the waves, a natural phenomenon caused by the black and white sand that’s made from a combination of quartz black basalt and white shell.

Other highlights include the wild willow and hazel woodlands that bloom with wildflowers, the otters that can be regularly seen hunting along the coastline, the seals, dolphins and minke whales swimming near the shoreline, and the 212 different bird species that call Eigg their home.

And if you’re lucky you might even spot one of the Golden or White-tailed eagles that frequently soar overhead on the hunt for their next meal.

Who needs to visit a zoo when you can see that lot for free?

I think it’s safe to say the Isle of Eigg is one of the most peaceful, beautiful, and surprising Scottish islands you’re ever likely to come across and if you ever get the chance you should definitely visit it.

The history of the Isle of Eigg

People have been living on Eigg (pronounced ‘egg’) since the Bronze Age and traces of ancient weapons including knives, axes and arrowheads have been dated from around the Neolithic era, so in many ways there are a lot of similarities between Eigg and the islands of Orkney and Shetland in the far north.

But where those islands are really quite desolate, Eigg has plenty of woodlands to complement its wild and remote areas.

Early iron age huts have been found throughout the island along with small fortifications that were designed to restrict incoming access – many of which are over 8,000 years old – but the greatest number of remains of Eigg’s ancient inhabitants date back around 1,500 years when Irish missionaries first brought Christianity onto the island.

Saint Donnan established a monastery at Kildonnan along with a large number of his followers and historical evidence suggests this monastery thrived for many years until the Picts massacred them in 617AD.

The remains of Viking settlers have also been discovered on Eigg, most notably an elaborately decorated silver and bronze sword handle that was found near Kildonnan, but evidence of Norse inhabitants have also been unearthed at Laig where the remnants of several Scandinavian fishing boats have been uncovered by archaeologists.

After the ownership of the western isles was handed from the Norse to the Scots in the 1266 Treaty of Perth, Eigg was controlled by the MacRory clan and then by the Scottish crown, though several bloody conflicts saw it pass through the hands of various Scottish nobles in the following centuries. Suffice to say this little island has a lot of stories to tell.

The most notorious event in Eigg’s history occurred in 1577 with the massacre at the Cave of Frances.

At this time a number of the MacLeod clan were being hosted on Eigg by the Ranald clan. Unfortunately, the MacLeod’s began taking advantage of the local Eigg women and in retaliation the Ranald’s rounded them up and set them adrift at sea.

After being rescued by fellow clan members the MacLeods returned to Eigg to seek revenge on the island’s inhabitants – who had already spotted the approaching invaders and had hidden themselves inside the Cave of Frances.

The cave was large enough to house all 395 Eigg residents but it had a small entrance that was overgrown with moss that made it all but impossible for the MacLeod’s to find.

After a few days of fruitless searching the MacLeod’s were ready to depart but just as they were leaving they noticed one of the Islanders near the cave opening.

The MacLeod’s found as much combustible material as they could and set it alight outside the cave entrance so that everyone inside would die of slow asphyxiation from the billowing smoke.

Legend says that only one islander survived the massacre – an elderly woman who had decided to hide elsewhere on Eigg – and while some historians question how much truth there is in this tale, many human remains have been uncovered inside the Cave of Frances over the intervening years, although all have now been removed and buried elsewhere.

If Eigg has whetted your appetite for the west coast of Scotland you might like to read my Western Isles articles. 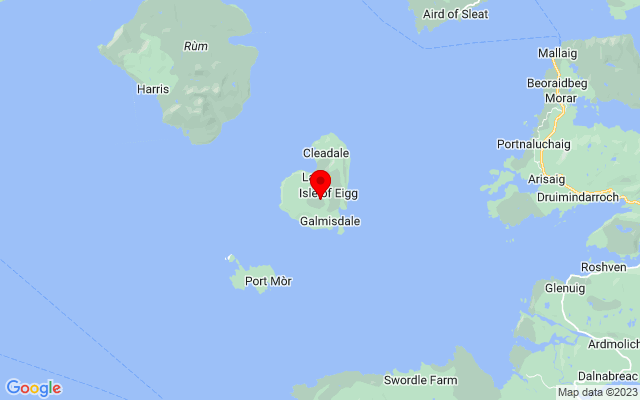