The Kelpies are two 30-metre steel sculptures of horse heads that stand in a custom-built extension of the Forth and Clyde canal near Falkirk.

The sculptures are based on Clydesdale horses that were used extensively for heavy farming and industrial work in the 18th and 19th centuries, but they also represent water kelpies, which are prevalent in Scottish mythology.

1: The Kelpies are stunning artworks and they’re much, much bigger than you might think from seeing them from the M9. Your camera trigger finger will go into overdrive, especially at night when the sculptures are lit up.

2: The attraction is completely free to visit unless you want to take part in the tour. There are a couple of on-site shops if you want mementoes and snacks, as well as a picnic area, a kid’s play area, and canal-side walking trails.

1: You can take a guided tour around the kelpies which includes a description of the mythology behind the artworks followed by a look inside the structures.

2: Take a walk through Helix Park after you’ve visited The Kelpies. The park is enormous and is a great place to let the kids run around and burn off some energy. There’s a play park in it too.

3: If you want to see another nearby attraction that celebrates Scotland’s canals check out The Falkirk Wheel, or for something completely different head north across the Kincardine bridge to visit the historic village of Culross.

If you’ve ever driven along the M9 motorway you can’t have failed to see the two enormous metallic horse heads rising up from the side of the road close to where the motorway crosses the River Carron.

These equine marvels are Scotland’s celebration of a bygone era of horse-drawn barges that kept the nation’s industry going for well over a hundred years.

Although Clydesdale’s (the breed of horse) are no longer a sight on the canals you can at least enjoy the spectacle of the world’s biggest horse sculptures when you visit them at Helix Park.

It’s not quite accurate to say these sculptures are of Clydesdale horses though, rather that they were inspired by Scotland’s earliest form of heavy transport.

What the sculptures are actually showing are kelpies – mythical Scottish water horses that supposedly had the strength and endurance of ten normal horses.

I guess that’s a good analogy for the strength of Scotland’s heavy industry back when the giant horses used to pull their massive loads along those canals.

The Kelpie sculptures are huge things to stand under, towering a full 30 metres overhead and covered in steel plates that have a mesmerising sheen when the sun starts to fade.

Floodlights play across the surface of the two horses and they almost appear to move if you catch them at the right angle.

The two sculptures stand in a custom-built extension of the Forth and Clyde canal near Falkirk and the 300-tonne artworks became a major tourist attraction after they went on public display in 2013.

Both heads can be walked around in just a few minutes but there are so many photo opportunities that you won’t really know where to begin.

You can wander around them on your own or you can book yourself onto a guided tour, with the tour allowing you to go inside the heads to marvel at the complexity of the construction work before heading over to the visitor centre for lunch in the café.

Although The Kelpies aren’t going to keep you busy all day – more like an hour – they can be combined with a visit to the nearby Helix Park to easily last a full afternoon.

Perhaps more importantly, because Stirling is nearby you can add a sightseeing trip to The Kelpies with a visit to the city too. I reckon that makes them totally worthy of your time if you’re in the area.

You’ll find more ideas for places to visit with my Central Scotland articles.

You can just walk around the site if you like but if you want a deeper understanding of the sculptures there’s a 30-minute guided tour that explains their history, how they were manufactured, and the significance that horses had to the industrial development of the region over the course of a hundred years.

The canals around the site are perfect for walks with the nearby Helix Park being particularly popular with tourists and locals alike.

The Helix is an area of Falkirk that links 16 communities by a network of canals and includes a large area of urban parkland that plays host to a lagoon, lots of pathways, and several children’s play areas.

The entire area covers an impressive 860 acres of land and contains over 17 miles of cycleways and footpaths so if you’re stuck for something to do I’d say a visit there is recommended, especially if you’ve got your bike with you.

You can find out more about The Kelpies in my 1-Day Drive From Edinburgh Itinerary.

Completed in 2013, The Kelpies celebrate the lineage of the heavy horses that towed barges up and down Scottish canals for much of the 19th century.

In ancient Scottish mythology, kelpies are sea horses that have the strength and stamina of ten normal horses, and it’s this quality that prompted artist Andy Scott to recreate them in steel to represent the power and endurance of Scotland’s waterways and heavy industry.

Prior to the creation of the main sculptures at Helix Park the artist created two miniature three-metre-high versions in his studio so that any design flaws could be spotted before work started on the ‘real’ artworks.

You can see two of these mini sculptures at The Kelpies sister site at The Falkirk Wheel. 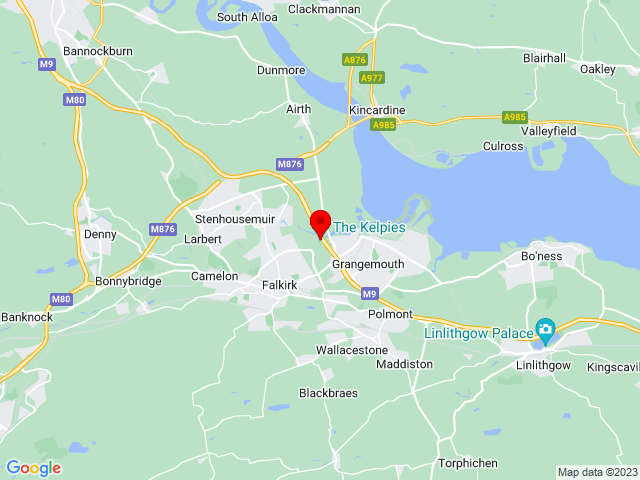 Things to do nearby

Falkirk. 8-minute drive. Falkirk is a large town in central Scotland that offers a wide variety of shops, pubs and restaurants in a traditional high street.

There are a number of historic landmarks in the town centre including the Falkirk Steeple and the Tattie Kirk as well as two modern shopping centres – Howgate and Callendar.

The Falkirk Wheel. Lime Rd, Falkirk FK1 4RS. 13-minute drive. An innovative rotating boat lift that connects the Forth and Clyde canals. Visitors can ride the lift and learn how it was made in the visitor centre. The nearby Scottish Segway Centre offers off-road tours to a Roman fortress.

Who is the sculptor of The Kelpies?

The sculptor of The Kelpies artworks in Helix Park near Falkirk was artist Andy Scott. The Glaswegian artist spent 8 years on the project.

What are the names of the two kelpies?

The Kelpies artwork near the Forth and Clyde Canal are based on two real-life Clydesdale horses called Duke and Baron.

How much did The Kelpies cost?

The Kelpies were commissioned as part of the project that regenerated Helix Park in Central Scotland. The entire project cost £43 million, which includes a £25 million grant from the Big Lottery Fund.

How long did it take to build The Kelpies?

Construction of The Kelpies took 90 days, but the entire duration of the project from conception to opening took 3,285 days. The build began in late 2013.