Ben Ledi is an 879 metre mountain near the village of Callander in the Scottish Highlands. It is situated in the Trossachs, a mountainous region in the southern Highlands that’s famous for its expansive lochs which include Loch Katrine and Loch Lomond.

If you’re looking for a nice easy walk into the spectacular Trossachs National Park in the southern borders of the Highlands I reckon the meandering path that winds its way up Ben Ledi should be your first port of call.

The Trossachs are a favourite hiking area for visitors and locals alike due to the fact there are so many well-maintained paths that run through the area alongside the myriad lochs that cover this part of Scotland.

There are two main entry points into the national park if you visit from the south which are the A82 from Glasgow and the A84 from Stirling, but it’s the latter that will take you to the foot of Ben Ledi.

From the pretty country village of Callander you’ll find the scenery abruptly changes into a mix of tumultuous rocky peaks and heavily wooded hills, with an occasional sighting of the watery expanse of one of the Trossachs many lochs on either side of the main road.

Keep a watchful eye on the road signs once you pass the village of Kilmahog as it’s just a wee bit further on where you’ll see the signpost for the Strathyre log cabin site. As soon as you see the sign you’ll have to take an abrupt turn onto a narrow bridge which leads towards the cabins in one direction and a small car park in the other.

From here you’ll be presented with information signs pointing to Ben Ledi along with an occasional glimpse of the summit through the dark pine forest that rings the popular landmark.

I’ll say at this point that if you’re not really in the mood for an uphill climb you have another equally stunning walk if you follow the path running past the Strathyre cabins alongside Loch Lubnaig.

This man-made path is both wide and easy to walk on so it makes a good alternative to Ben Ledi but it’s also very popular so don’t go expecting to blaze off into the sunset without another soul to be seen for miles around.

You’re more likely to have to constantly move onto the banks to escape the cyclists whizzing past, but at least you can escape to the serentity of the loch which is easily accessed at several points along the route.

The path winds its way to Strathyre in the north for a walk that takes a good couple of hours at a gentle stroll, with the scenery changing from lochside views to dense forest at the far end of the loch. It’s nothing short of spectacular and is certainly worth revisiting once you’ve completed the summit hike up Ben Ledi.

The mountain (2,884 feet to the top) is classified as a Corbett so perhaps isn’t on the ‘must-do’ list of many Munro-baggers but it’s no less popular for it due to the easy-going long shoulder used to access the summit from the south.

Much of the route is fairly gentle so don’t be surprised to set out and see cyclists, pensioners and children along the way although there are a couple of sections that are leg-achingly steep so if you really want to get to the top you’ll need a moderate level of fitness.

While the southern aspect is fairly gentle the northern side is much steeper and is accordingly much less visited. That means you can attack the mountain from the south and instead of heading back the same way with the rest of the crowds you could continue north to really get a sense of the beautiful scenery in this part of Scotland.

Things to do at Ben Ledi

The northern slope of Ben Ledi is notable for a few features like Lochan nan Corp or ‘the little loch of the dead’ where 200 people died in a tragic accident in the 1900s, but in my opinion the semi-circular valley near the bottom of the northern side is the star of the show.

It’s at this point where you’ll find a gently babbling burn running off the mountain slopes with swathes of purple heather and yellow gorse covering the landscape in all directions.

Coupled with the occasional call of buzzards on the hunt and a lack of tourists (they’ve all wandered back down the southern slope) it’s a little oasis of nature that pretty much sums up Scotland’s great outdoors.

If you can drag yourself away you’ll find the well-maintained path will take you back to the starting point at the car park in around an hour and a half for a complete circuit that should take you around five to six hours in total.

If you intend on just sticking to the south slope of Ben Ledi you could probably finish the route up and down again in around four hours. Bear in mind though, these are summer times and once winter hits it will no doubt take longer.

While the path is rocky for the bottom two-thirds the top gets quite muddy after a rainfall and it shouldn’t really be attempted if you don’t know what you’re doing. As always, whatever the weather pack a spare warm jacket, a few snacks and bottles of water, and make sure your phone has plenty of power before you set off.

Also make sure you carry a backpack that is waterproof – like most of the ones made by Berghaus. You’ll find a good selection of Berghaus backpacks on Amazon.

I’ve included more hiking tips in my Guide to Winter breaks in Scotland.

If you’re considering the Trossachs for a holiday I thoroughly recommend booking yourself into the Strathyre log cabin park at the foot of Ben Ledi. Although expensive, these cabins are set in one of the prettiest areas in Scotland and you’ll find enough mountains, forests and lochs to keep a family entertained for the best part of a week.

The cabins are very well equipped and many feature hot tubs so you can take a soak while gazing out across the wilderness – although you’ll need to take a can of Smidge with you as the area is plagued by the wee blighters in the summer.

See my guide to the best midge repellents to use in Scotland.

The cabins have their own designated parking areas so if you want to follow the path that runs alongside Loch Lubnaig you’ll either have to park somewhere safe on the roadside or try to squeeze into the small car park at the end of the road in the opposite direction. Take my advice and try to get there before 9 am in the summer or you’ll never find anywhere to leave the car.

There’s a café in the middle of the cabins that serves a good selection of home cooking and decent coffee as well as sell a variety of tourist gifts but to be honest whenever I visit Ben Ledi I usually stop off at Callander and pack my bag with snacks from the supermarket as it works out much, much cheaper.

Loch Lubnaig is popular with paddleboarders and kayakers although the access to the water’s edge is much easier from the opposite side where you’ll find another café and a car park just a few feet from the shore. While you could hit the loch from the Ben Ledi side you’ll have to carry your equipment a good half-mile or so, so it’s not exactly convenient.

Heading back to the mountain there’s not too much to say about it other than it offers a great walk with amazing views. As I already mentioned, the path is well-maintained and quite easy from the south side and as it’s so popular you’ll almost certainly have someone in the near distance to follow.

In fact, I’d say it’s almost impossible to get lost on Ben Ledi if you stick to the path but take extra care in winter when those Scottish ‘four-seasons-in-one-day’ roll in to obliterate the scenery with snow in a matter of hours.

In addition to the usual hiking gear I’d stick a paper map in your bag as this part of Scotland has very sketchy mobile signals. The best maps by far are the ones made by Ordnance Survey and you can buy one that covers the majority of the Trossachs (number OL46) from their website. Buy OS Landranger maps direct from Ordnance Survey.

Alternatively, download the Walk Highlands Viewranger app which will show you the path you need to take alongside the route you’re actually taking so it’s easy to re-orient yourself if you get lost. Learn more about the Viewranger app here.

The entire route up the south side, down the north and back around to the car park is around six miles in total and the majority of the path is comprised of a light-coloured stone that clearly stands out amongst the greens and browns of the mountainside.

Once you get around two-thirds of the way up the mountain you can look south to see the Wallace Monument and Stirling Castle with the Firth of Forth just about visible in the distance (on a clear day).

The best bit, of course, is getting to the top where you’ll see a small cairn and a memorial iron cross that commemorates a mountain rescue leader who died there in the late 1980s. A wee bit further on lies the summit and a trig point, with Ben Lomond and the Arrochar Alps soaring away into the distance and the northern descent towards the Stank Glen just out of sight behind a ridge.

Biting midges are prevalent along the entire route thanks to the thick grass that offers them a perfect place to hibernate but if you can put up with a few itchy bites* you’ll find Ben Ledi offers one of the best walks in southern Scotland.

At the end of your visit you’ve got a few options in the area if you’d like to explore more of the region. Highlights include Bracklinn Falls, Inchmahome Priory, and Doune Castle.

*Discover what you can do to protect yourself from midges in my Complete Guide to Avoiding Midges in Scotland. 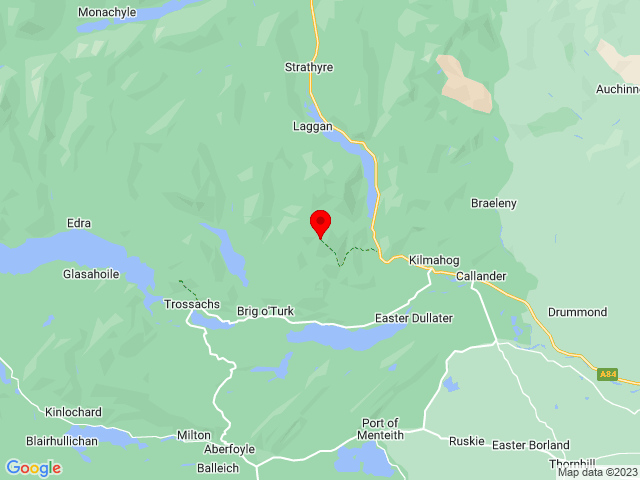 Things to do near Ben Ledi

From centre of Callander:

How do I get to Ben Ledi?

How much does it cost to visit Ben Ledi?

There is no fee to visit Ben Ledi.

What are Ben Ledi’s opening times?

What visitor facilities are there at Ben Ledi?

There are no visitor facilities at Ben Ledi.