The Bealach na Ba is a twisting mountain pass on the Applecross Peninsula in Wester Ross that’s undeniably the most famous section of the North Coast 500 Highland touring route.

This single-track road rises over 2,000 feet (0.61 km) at its highest point and is famous for being one of the most scenic drives in the world, as well as one of the most dangerous due to its tight hairpin bends.

Discover everything you need to know about visiting the Bealach na Ba in this complete guide.

About the Bealch na Ba

To be honest, I wouldn’t normally include a road in this website. After all, how can a boring road be classed as a tourist attraction?

Normally it wouldn’t, but then the Bealach na Ba is no ordinary road. Imagine an alpine pass with tight, hairpin bends that twists its way through gobsmacking Highland mountains and you’re on the right track, but still a mile from what it actually looks like in real life.

The Bealach na Ba (or ‘Pass of the Cattle’ in Gaelic) is located in the southern half of the Applecross Peninsula, more or less directly east of the Isle of Raasay and north of the Kyle of Lochalsh.

This is a region of Scotland that’s spectacularly pretty, with vast mountain ridges backed by dramatic corries, interspersed with sweeping plains of moorland that are pockmarked by hundreds of lochs and lochans. It’s wild, desolate, dramatic, and utterly beautiful.

The Bealach na Ba threads its way through this landscape for 45 miles from the junction of the A896 at the point where the River Kishorn joins Loch Kishorn, to the small village of Applecross which overlooks Applecross Bay on the southwest corner of the peninsula.

The road starts off gently enough with a shallow gradient that can leave you feeling a tad underwhelmed, but that all changes when you round the first corner and see the line of tarmac losing itself amongst the towering mountains that loom ahead, with just an occasional glimpse of the famous hairpin turns that lead to the summit.

Those twisting – sometimes 180° – bends continue steadily uphill to the highest point of the pass which sits a remarkable 2,053 feet (0.63 km) above sea level, before winding down the slightly less exhilarating western side of the pass which finishes at the attractive Applecross Bay.

It’s a genuinely exhilarating journey, with some gradients approaching 20% (making the Bealach na Ba the steepest road in Britain) and views that rival any alpine pass in Europe.

As far as what it’s like to drive, the road is narrow but in good condition with few potholes, and just wide enough on some sections for cars to pass each other. There are also crash barriers lining the upper half leading to the summit with a few vertigo-inducing drops, so if you haven’t got a head for heights I suggest not looking over the side.

Before moving on, in the interest of safety I have to mention that this road is absolutely not suitable for inexperienced drivers, motorhomes, or cars with caravans, so if you fall into either of those categories you should take the alternative signposted route that circles the peninsula up its eastern side to Shieldaig, along its northern edge, and then back down to Applecross.

In fact, local breakdown services suggest you don’t attempt the Bealach na Ba in anything larger than a VW camper, as although there are lots of passing spaces it only takes one accident to completely block the pass for other road users – something to be doubly aware of in winter when the steep verges on the roadside are covered with snow.

Another point to note about this road is the fact that it’s quite popular with cyclists (how they manage it I have no idea) so drivers will inevitably get stuck behind them, and once you’re halfway up there are safety barriers and steep verges meaning it’s very difficult to pull in.

That being said, the Bealach na Ba is one of most scenic roads in Scotland and is a must-do for anyone thinking of driving the NC500.

The reason this road exists can be found in its Gaelic name ‘Bealach na Ba’ which translates into English as ‘Pass of the Cattle’. It was built in 1822 as a way to steer livestock across the Applecross Peninsula without having to take the much longer route around the coastline, but these days it’s mainly used a tourist attraction and a way for locals to get to work.

You can’t miss the start point on the A896 as it’s signposted well in advance and there’s a café next to its junction which is one of the few places to grab a bite to eat in the area.

The road widens slightly at this point so if you want to snap a selfie in front of the famous warning road sign you can park up, but there’s a designated car park a wee bit further on if the verge is full (which it almost always is. This is a very popular tourist site).

The road offers gorgeous views of Lochs Kishorn and Carron at the start before turning 90° west where it winds its way between mountains that loom overhead on either side. This is the most dramatic part of the route and you’ll no doubt want to stop to take photos, so thankfully the road has been widened slightly for those drivers that are looking at the views to the sides instead of the road ahead.

What surprised me when I drove the Bealach na Ba were the number of passing places which have obviously been installed to cope with large numbers of visiting tourists. Some of these are large enough to temporarily pull into, so if you want to stop and take a few photos keep your eyes open for these large passing spaces and pull as far in as you can.

These spaces aren’t designed to leave cars unattended so it’s handy there are two car parks at the summit, the first of which offers a superb viewpoint for the ultra-tight hairpin turns the pass is famous for.

Stopping here is an absolute must as you’ll be able to look back down at the route you’ve just taken which has to be up there with the best scenic views in Scotland.

The second car park lies around the corner which is the highest point of the pass and it’s another spot to take in some amazing views, only this time you’ll be able to look west towards the islands of Raasay, Skye, and Rum.

The terrain is rough moorland for miles in all directions but if you like going off-grid you can walk to the summit of Sgurr a Chaorachain from the top car park which is one of the peaks that overlooks the Bealach na Ba.

It’s quite an easy route as Corbetts go as you will have already completed most of the ascent by car, just be aware the terrain is very rough from start to finish. Walk Highlands has a complete route description if you’re interested.

From the car park the road immediately begins its descent to Applecross which is a less inspiring landscape but still scenic in its own barren way. The gradients are much shallower as you head downhill but there are a few more tight twists and turns and you’ll no doubt encounter lots of other road users trying to squeeze their way past as they make their way back over the Bealach na Ba.

There’s not much to say about this western stretch of road until you reach the village of Applecross.

Applecross is known locally as ‘the street’, and to be honest that’s all it is – a single street that follows the shoreline south of Applecross Bay. Were it not for the fame of the Bealach na Ba this would no doubt be fairly deserted, but a few entrepreneurs have set up cafés and a couple of gift shops and there’s a visitor centre and a pub as well.

After you’ve grabbed a coffee, my advice to top off a day on the Applecross Peninsula is to drive to the other side of the bay where you’ll find a wee community-run heritage centre, and a footpath that follows the shoreline to the beach of Applecross Sands.

This 4-mile footpath features extraordinary views of the west coast islands and it’s a great way to get some fresh air before making the return journey across the Bealach na Ba, unless you want to follow the North Coast 500 along the narrow coastal road heading north towards the A896 and Shieldaig.

Directions to the Bealach na Ba 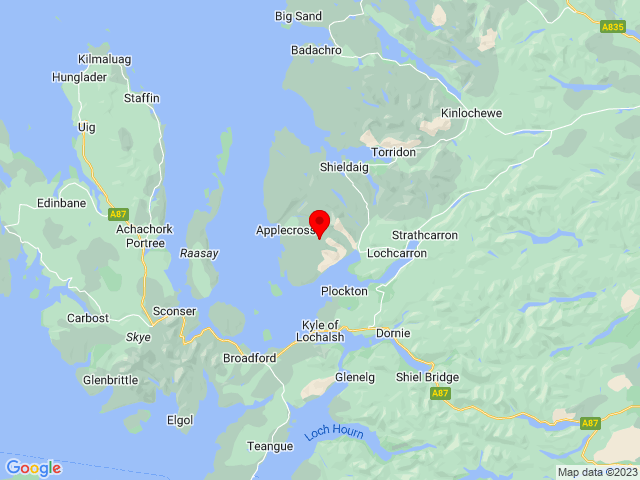 Things to do near the Bealach na Ba

Accommodation near the Bealach na Ba

FAQ’s about the Bealach na Ba

How hard is the Bealach na Ba?

The Bealach na Ba is a difficult road to traverse whether cycling or driving. The road rises 626 metres above its sea-level starting point on an incline that is 5.5 miles long.

The Bealach na Ba is 20% at its steepest gradient, has lots of switchback turns, and is single-track, making overtaking virtually impossible for cars. However, the road surface is high quality tarmac and is in a good state of repair.

Is the Bealach na Ba one way?

The Bealach na Ba is entirely single-track but it is not one way, and access is possible from both directions of Loch Kishorn and Applecross.
Drivers meeting cars coming in the opposite direction have multiple passing places to pull into.

Is the Bealach na Ba suitable for motorhomes?

The Bealach na Ba is not suitable for large vehicles, whether motorhomes, caravans or lorries. The generally accepted opinion is that vehicles no larger than a VW camper van should attempt crossing the pass due to its very tight turns.

A warning sign at the Strachcarron end says: “This road rises to a height of 2053 ft, with gradients of 1 in 5 and hairpin bends. Not advised for learner drivers, very large vehicles or caravans after first mile.”

The Bealach na Ba is part of the Wester-Ross section of the NC500.

More places to visit in the Highlands