By Craig Neil
As an Amazon Associate I earn from qualifying purchases.

There’s a lot to like about Glasgow. Not only is it Scotland’s largest city but it’s also home to a dizzying number of world-class art galleries, museums, theatres and music venues.

This vibrant city is bursting with character and visitors can enjoy a varied collection of places to visit from Kelvingrove Museum to Glasgow Cathedral, with the added bonus that almost all of the city’s top attractions are completely free to enter.

Take a look at the most interesting attractions in Glasgow for couples with this article which features overviews of the top places to visit and immersive 360° photos.

Map of interesting attractions in Glasgow for couples 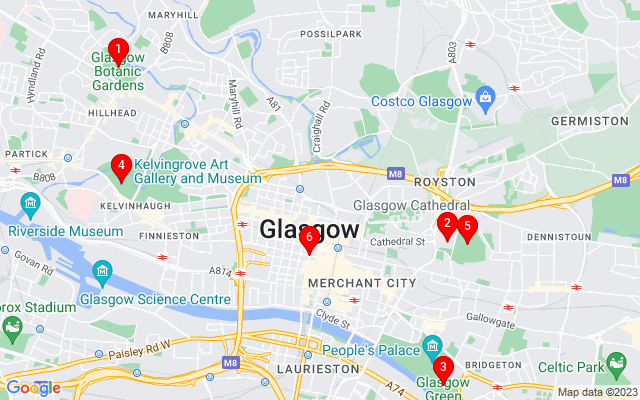 Interesting attractions in Glasgow for couples

Out About Scotland Complete Guide to Glasgow Botanic Gardens

The Glasgow Botanic Gardens are located on Great Western Road, one mile north of Kelvingrove Museum. Entry is free and visitors can explore flower beds, arboretums, and greenhouses on a network of paths that run through the 20 hectares of landscaped grounds.

There are over 12,000 different plant specimens to view in Glasgow Botanic Gardens, but perhaps the most impressive is the national collection of ferns in the stunning Victorian-era Kibble Palace.

This wrought iron and glass masterpiece wowed crowds when it was unveiled in 1873 and it still manages to captivate visitors to this day.

Other highlights are the modern glasshouse that contains a tropical rainforest and the arboretum that spreads out from the banks of the River Kelvin.

You’ll also find an excellent café inside the restored curator’s cottage which serves delicious home-baked treats – perfect for replenishing energy levels before crossing the bridge at the rear of the gardens and going for a walk on the scenic Kelvin Walkway.

Out About Scotland Complete Guide to Glasgow Cathedral

Without the Cathedral, Glasgow would be a very different place as it’s the original site where St. Kentigern built his chapel in the 6th century, around which the city grew and prospered.

The Cathedral is a fascinating place to visit and it does a great job of assisting curious visitors, thanks in part to Historic Environment Scotland which has installed information panels that explain the story of St. Kentigern and how his chapel became the awe-inspiring cathedral.

The nave, in particular, is an amazing space, not quite as impressive as York Minster but not too far off, and it’s extraordinarily atmospheric, especially downstairs in the lower crypt where the remains of St. Kentigern are laid to rest.

There’s no fee to enter Glasgow Cathedral so if you combine it with the nearby Necropolis and St. Mungo Museum it’s possible to have a very interesting afternoon in the city for next to no cost.

Out About Scotland Complete Guide to Glasgow Green

Glasgow Green is a large 55-acre park situated in the heart of Glasgow. Due to its location it’s one of the most-used green spaces in the city, but it has other accolades including being the oldest park in Glasgow (King James designated it a park in 1450) and the city’s main event space.

Two major events that draw tens of thousands of people each year are the TRNSMT Music Festival and the World Pipe Band Championships, but even these don’t draw as many people as the star of the show – The People’s Palace.

This ornate, red-bricked building opened in 1898 as a social history museum and it still serves that purpose today with a large collection of artefacts that tell the story of Glasgow, its people and the shipbuilding industry that transformed it into one of the great industrial powerhouses of Britain.

Adjacent to The People’s Palace is the Winter Garden which is an enormous greenhouse along the lines of Kibble Palace in Glasgow Botanic Gardens.

Inside, you’ll find a collection of exotic plant life next to a café, exhibitions, and a shop, and as with most other attractions in this city, entry is completely free.

Out About Scotland Complete Guide to Kelvingrove Museum

Kelvingrove Art Gallery and Museum barely needs an introduction as it’s one of the most-visited attractions in Scotland.

This huge art gallery and museum is located on the southwest edge of the 84-acre Kelvingrove Park, meaning it’s within walking distance of lots of other attractions including the Riverside Museum, The Tall Ship and the Hunterian Museum which are all just a 15-minute walk away.

Stepping through the doors onto the marble floor of the great hall is quite an experience as there are exhibitions and displays crammed into every nook and cranny, and in fact, Kelvingrove Museum is home to an astounding 9,000 artefacts and paintings.

Children will love the Life and Expression galleries which feature exhibits from the fields of nature, history and science, while mums and dads will marvel at the fine art galleries that include masterpieces by Rembrandt, Salvador Dalí, and Renoir.

In total, there are 22 galleries in Kelvingrove Museum so if you’re looking for somewhere to take the kids on a rainy afternoon it’s probably the best attraction in the city to keep them busy.

Out About Scotland Complete Guide to The Glasgow Necropolis

This is one of the more unusual attractions in Glasgow but it’s no less popular for it.

The Necropolis is a historic graveyard situated on a hill overlooking the cathedral, where more than 50,000 burial stones cover 37 acres. Many of the decorative tombs and headstones date from Victorian times and the majority are quite unlike anything you’ll see in any other graveyard in Scotland.

One thing that makes The Necropolis unique is the fact that it was designed by a landscape gardener instead of an architect, so walking around its maze of winding pathways feels a bit like walking around a parkland.

The mix of tombstones, woodland, and carpets of wildflowers all add to the atmosphere so it’s not surprising the Necropolis attracts so many tourists, especially in summer.

You’ll get superb views of the city skyline by climbing to the foot of the John Knox Monument, but if you’d rather learn about the history of the iconic graveyard you can join a guided walking tour organized by The Friends of Glasgow Necropolis.

The University of Glasgow

Out About Scotland Complete Guide to The University of Glasgow

This might not be the first place that springs to mind when looking for tourist attractions in Glasgow, but the city university definitely deserves a place somewhere on your sightseeing itinerary.

As one of the oldest universities in the world (having been founded in 1451), the University of Glasgow is an extraordinary place, not only for its size which has grown steadily over the course of hundreds of years but also for its Gothic architecture which is as close to Harry Potter’s Hogwarts as you’re ever likely to find in real life.

You’re free to roam around the exterior at your leisure, but please be aware the university is a working building so many areas are off-limits.

That being said, there are a few must-sees in the university which include The Cloisters underneath the Gilbert Scott building, Bute Hall, and the Hunterian Museum.

At this point I have to highlight the Hunterian Museum which is worth the journey on its own, and in fact, I’d say it’s one of the top attractions in the city.

The museum features one of the finest collections of historic artefacts in Scotland, sourced from the fields of archaeology, palaeontology, medicine and zoology.

It might not be as big as Kelvingrove but it’s just as interesting and has far fewer crowds, plus – like all the best attractions in Glasgow – it’s completely free to get in.

Glasgow is located in the western lowlands of Scotland at roughly the same latitude as Edinburgh. It is a port city and it’s famous for its shipbuilding industry centred around the River Clyde.
Glasgow is also the largest city in Scotland, and it has the largest population.

Distances from other UK cities:

What is the oldest pub in Glasgow?

Glasgow is well known for its traditional pubs, some of which are hundreds of years old. The oldest pub in Glasgow is believed to be The Saracen Head in Gallowgate. The pub has moved location several times and it is recorded that there have been four Saracen Head pubs in Gallowgate since 1755.

The previous contender for Glasgow’s oldest pub was The Old College Bar which was said to date to 1515 but was recently discovered to have actually been built in 1810.

What is there to do in Glasgow?

Glasgow is one of the top cities in Britain for attractions, many of which are council-run and have no entrance fee. Top-rated things to do include:

How old is Glasgow?

Glasgow is thought to be at least 1,500 years old.
It is known there was a settlement on the River Clyde where modern Glasgow is located in 550 BC, but the settlement did not begin to develop into a city until St. Kentigern established the 6th-century chapel that would later become Glasgow Cathedral.

Find the top tourist attractions in Scotland with this map

Hello there! I’m Craig, I'm from Edinburgh, and I love exploring Scotland. In this website I share my experiences of visiting the top Scottish tourist attractions along with travel tips and advice that will help you plan your own trip around this amazing country.

Book Scotland tours & tickets with Get Your Guide