Brodick is the main village on the Isle of Arran, located on the west coast of Scotland. The village lies halfway along the eastern side of the island where it overlooks Brodick Bay and Goatfell mountain.

It is the main arrival point for the majority of visitors due to the ferry port but it’s also a popular tourist destination in its own right thanks to its wide golden beaches, thick surrounding forests, a historic castle and a selection of family-friendly attractions.

For many people arriving on Arran, the coastal village of Brodick is the first place they visit thanks to the Calmac ferry terminal on the eastern end of the high street.

Ferries arrive every hour for 12 hours each day from Ardrossan on the mainland, making Brodick one of the busiest villages on Scotland’s west coast with thousands of holidaymakers using the port for day trips from Glasgow and beyond.

While it’s understandable that many visitors will zoom through the village if they’re only intending to cycle the Arran Coastal Way or romp around Brodick Castle, anyone that spends more than a day or two on this amazing wee island should consider adding a few hours in Brodick to their itinerary.

The picturesque village lies midway along the eastern edge of Arran where it overlooks some of the best views on the island with the dramatic peaks of Goatfell rising into the sky to the north and the deep blue waters of Brodick Bay and the Firth of Clyde to the east.

Wide, golden beaches ring the shoreline where it faces the bay and dense, lush woodlands cover the hills to the west, so it’s fair to say this pretty village isn’t short of places to explore.

While it’s not exactly the biggest village in Scotland I personally think it’s one of the nicest to visit and if you’re anything like me you’ll start feeling relaxed as soon as you step foot off the ferry gangway – no doubt helped by the scenery that opens up as soon as you exit the terminal.

Once on the main road you’ll find yourself in the centre of Brodick with a few pubs and restaurants, a supermarket and some tourist shops within a few hundred feet of each other, but the main attraction is the bay which circles around to the north where you’ll catch glimpses of Brodick Castle through the surrounding forest.

If exploring past the village isn’t really your cup of tea you could always just spend the day in the village centre but honestly, who wants to do that when ‘Scotland in miniature‘ is waiting for you just down the road?

Foot passengers will be pleased to know the village centre is only a short walk from the ferry and drivers will find a reasonably large parking area on the seaward side of the high street, meaning Brodick is well-suited to day-trippers thanks to the sail from Ardrossan that takes less than one hour.

Anyone looking to spend longer on the island can stock up on supplies at the supermarket before moving on or they can head to the Arran Coastal Way which starts at the opposite end of the village. Alternatively, they could turn left from the ferry terminal and head to Lamlash Bay and Holy Isle which is located 4 miles to the south.

For such a compact village, Brodick really does have a lot of attractions on offer.

Things to do in Brodick

I was lucky enough to spend a week on Arran in 2020 and what struck me most about Brodick is its superb location. Not only is it a great place to spend a day but due to its position midway along the eastern side of the island it makes a perfect base for a holiday.

The A841 circles Arran almost completely along its coastline so whether it’s the amazing coastal road at Lochranza that piques your interest or the exciting mountain bike trails of Arran’s forests in the south, Brodick offers an easy-to-access starting point.

The Arran Coastal Way was one of the highlights of my visit and I thoroughly recommend it if you visit the island on a bike, but you can also complete part of it on foot as the route begins on the edge of Brodick Bay.

To find the starting point follow Brodick high street half a mile from the ferry till you reach a small road heading between a mini market and a bowling green which narrows down to a rough path.

This path – Fisherman’s Walk – pretty much follows the entire length of the bay before heading slightly inland in the direction of Brodick Castle. It’s not a particularly long route at around 2 miles but it took me nearly two hours to get there purely because I kept stopping to soak up that gorgeous view.

Brodick Bay is wide and shallow so it would be a good place to go for a swim but what I ended up doing a few days later was hire a kayak in Brodick and paddle along the coastline. Because the bay is so sheltered you’ll find it easy going but be aware that once you reach the section near the castle it gets a little choppier as there’s no protection from the Firth of Clyde.

If you’d rather stick to the footpath I suggest following Fisherman’s Walk north till it returns to the A841. From that point you’ll find an exceptionally good pub/restaurant at The Wineport which has a brewery behind it that sells a selection of quality brews.

You have a few options from The Wineport depending on how long you have on the island so you could take a one-mile walk to Brodick Castle (read my Guide to Brodick Castle for detailed information about it) or head south and follow the road past the Arran Aromatics outlet.

This company has become something of a byword for natural health and beauty products and they’ve got an excellent store that sells their entire line of products along with a superb café and a hand-made Arran cheese store on either side. If nothing else I recommend stopping by just to get a few souvenirs for friends and family.

You can continue along the A841 which will eventually take you back to Brodick high street or you can take a shortcut alongside a golf course that rejoins Fisherman’s Walk.

Either option is good but if you stick to the A841 you’ll be able to visit the Arran Heritage Museum which is a nice wee tourist attraction that showcases the island’s rich history with a vintage farm and lots of local exhibits.

It’s much bigger inside than it looks from the roadside and it’s definitely worth visiting if you ever find yourself stuck for something to do.

Most of the other activities in Brodick centre on the bay where you’ll find pontoons for mooring boats (it’s a very popular stop-over for sailing boats in the Firth of Clyde), an 18-hole golf course and a putting green, and of course there are the large pub/restaurants that feature outside seating areas overlooking the sea.

There are also picnic benches and seating areas along the length of Brodick where it faces the bay and I noticed many people were content to spend all day on this grass area while the kids splashed around on the nearby beach.

There are a few shops opposite for mums to browse and dads can play on the crazy golf course, but I have to be honest and say that other than that there isn’t much else to do on the high street.

That being said I don’t think you’re going to get bored in Brodick, especially if you’re an outdoors type, and I can’t think of a nicer village on the south-west coast of Scotland to take the family for a day trip. 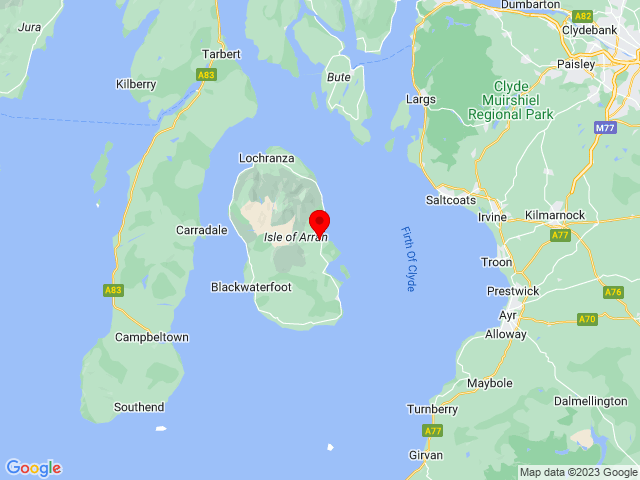 Things to do near Brodick

Is Brodick a town?

Brodick is a village on the Isle of Arran, which lies on the west coast of Scotland in the Firth of Clyde. Brodick is the main settlement on the island, though Lamlash has a larger population.

What is the population of Brodick?

From the 2001 census, Brodick had 621 inhabitants. Arran as a whole has around 4,000 permanent residents.

What is the meaning of ‘Brodick’?

The name is derived from the Norse ‘breda-vick’ meaning ‘Broad Bay’.

What visitor facilities are there at Brodick?

Find unique Scottish gifts in the Out About Scotland Etsy shop