The village of Lochranza on the Isle of Arran is located in an exceptionally picturesque area in the north of the island. Although it is usually visited only as a departure point for the ferry that connects the island to Claonaig on the mainland, Lochranza is also worth visiting for its own tourist attractions.

The village lies at the foot of dramatic hills that encircle it to the south while a small scenic bay opens up to the Firth of Clyde and the Campbeltown peninsula to the north.

A ruined castle dominates the mudflats of the bay which is a good starting point for the Newton Point coastal path that runs east around the coastline.

Whisky-lovers, meanwhile, will enjoy samples of fine single-malt Scotch during a visit to the Lochranza distillery located off the A841 at the entrance to the village.

The Isle of Arran on Scotland’s west coast has long been a firm favourite with holidaying Scots thanks to its close proximity to Glasgow, its beautiful landscapes, and its brain-boggling number of tourist activities.

There’s a reason why this small island is fondly called ‘Scotland in miniature’.

You want mountain climbing? You got it, with no less than four Corbetts (mountains under 3,000 feet) including Goatfell in the northern region. Great big brooding castles? Look no further than Brodick and its superb National Trust-owned fortress. Woodland walks? Well, this island is full of them with South End, Glenrickard and Dyemill forests offering glorious adventures in the great outdoors.

But in my humble opinion the best of Arran can be found on its coastline and one of the nicest sections lies at the north end of the island.

Wild and remote, the area really has to be seen to be believed with its dark brooding ridges to the south courtesy of the Highland Boundary Fault and an impossibly picturesque horizon to the north where the Campbeltown peninsula touches the deep blue waters of the Firth of Clyde.

Smack-bang in the middle of all this lovely scenery is Lochranza, a tiny village that punches well above its weight when it comes to visitor attractions.

I visited Lochranza on my very first day on Arran, purely because I had decided to go for a drive in any random direction to see what the 176-square-mile island had to offer.

The village of Brodick is home to the main ferry terminal and it’s as good a starting point as any for a drive around the island. Once you’re past the high street you’re presented with two options – head west along the B880 or head north along the A841. It’s the latter which runs along the eastern coastline and it’s the route I decided to take.

I have to admit I couldn’t understand why so many cyclists had pointed themselves in the same direction until I got a few miles up the road. The scenery abruptly opens up with a mix of soaring mountain peaks, thick forests and rugged beaches that are only broken by the winding stretch of asphalt that cuts between them.

As a place to take a bike I really can’t think of many better places than Arran and I was pleasantly surprised to see the terrain gets even better once you pass the pretty village of Sannox.

From here the A841 turns inland and rises through heather-covered moorland ringed by vast rock outcrops that almost-but-not-quite rival the scenery of Skye before descending again as soon as you reach Lochranza.

This small village sits on the shore of Loch Ranza, a small sea loch that opens out to the Firth of Clyde and is a short distance from the mainland, hence its use as Arran’s second ferry terminal.

The loch is really more of a narrow estuary which means the southern end turns into a wide mudflat once the tide goes out, and because it’s so sheltered by the surrounding hills it makes a good place for pleasure yachts to moor up as you can see in the photos on this page.

Although Lochranza was a herring fishing port in another life it is now mostly used for tourism and as a way to get to the mainland thanks to the small ferry pier located on the north-west tip of Loch Ranza.

The Calmac ferry is a popular choice for tourists who want to explore the Campbeltown peninsula and the short sail to Claonaig means you could quite easily combine a tour of both areas in a single weekend.

Check out the Calmac website for sailing times and prices.

If you would like to join a guided tour of Scotland’s lochs take a look at this selection from Get Your Guide.

Lochranza is one of the smaller settlements on Arran at under two hundred residents in total but those numbers are boosted considerably by the number of tourists who visit it to walk across the Torr Meadhonach hills that flank it on the inland side.

These hills are a bit of a blessing and a curse for the village as although they offer shelter from winds blowing in from the firth they also shade it from the low-lying sun for much of the year. In fact, Lochranza is officially the most shaded village on earth, not helped by the fact that Arran is also one of the wettest places in Scotland.

Thankfully though you don’t have to walk far to escape the gloom and once you’re up in the hills or on the coastline you’ll have nothing but uninterrupted sky in all directions.

The gloomy village doesn’t seem to bother Arran’s wildlife anyway and it’s a bit of a must-visit location for animal lovers with a healthy population of red deer that can frequently be seen in the area, grey seals that hunt along the coast in both directions, and golden eagles that are frequently seen soaring overhead.

The main feature of Lochranza is the 16th-century Lochranza Castle which sits on top of a spit of land that juts out almost into the middle of the loch. It’s not a large castle by any means and in fact – from what I could see when I peered through the gate – it’s almost completely in ruin, but it certainly makes for a fine photo opportunity with Loch Ranza framing it in one direction and the surrounding hills providing a suitably moody backdrop on the landward side.

The castle is free to visit and there’s a small parking area on the spit but other than taking a few snaps and admiring the scenery it’s not worth making the journey just to see it.

There is, however, a wealth of walks in all directions surrounding Lochranza Castle and I’d certainly use it as a starting point to explore the area.

One recommendation I have for a wee adventure in the great outdoors is to start at Lochranza Castle and follow the A841 south then head north-east up Newton Road. At the next junction you’ve got two options for a really good walk.

Option one (head north towards the coast) takes you along the three-mile Newton Point coastal path to the Fairy Dell which is supposedly a gateway to the land of the faeries. Mythology aside it’s a really nice path, a bit rocky perhaps (don’t bother trying to take your bike), but very scenic with a wide shingle beach near the dell which you’re pretty much guaranteed to have to yourself.

The scenery on this walk is mostly windswept bracken-covered hilltops with a smattering of woodland and it’s very, very pretty with stunning views across the Clyde.

Option two points inland on a moderately steep incline up the Torr Meadhonach hill where you’ll see signs pointing you towards the well-worn ancient footpath that joins Lochranza with Laggan on the east coast.

You’ll have to deal with boulder-strewn paths and a little rock scrambling on the seven-mile trek which will take around four hours to complete but I’d say it’s definitely worth the effort.

On your return you’ll end up within walking distance of the Arran distillery so you might as well head there for a post-walk treat in the café.

The distillery is a relative youngster in Scotch whisky terms having started production a mere twenty-five years ago but they’ve made quite a name for themselves since those very first casks were filled.

Arran malt is highly regarded for the purity of the ingredients used in it with crystal-clear freshwater siphoned off the hills directly above the distillery and only the finest barley grains used in the milling process.

The result is a spectacularly sweet dram with a hint of peat, although there are several special editions that infuse different flavours thanks to the use of a variety of ex-sherry casks.

The well-stocked whisky shop has its own tasting area where you’ll be able to try a few samples to decide which bottle you’ll end up taking home and I have to say the Arran distillery is one of the most generous I’ve visited when it comes to dishing out tasters.

If you find yourself leaving the shop a little whisky-infused you’ll be pleased to know there’s a first-class café on site that serves quality local produce and if you’d like to learn about the whisky-making process there are regular tours that will take you around the entire facility.

See the Arran Whisky website for the latest prices and opening times. 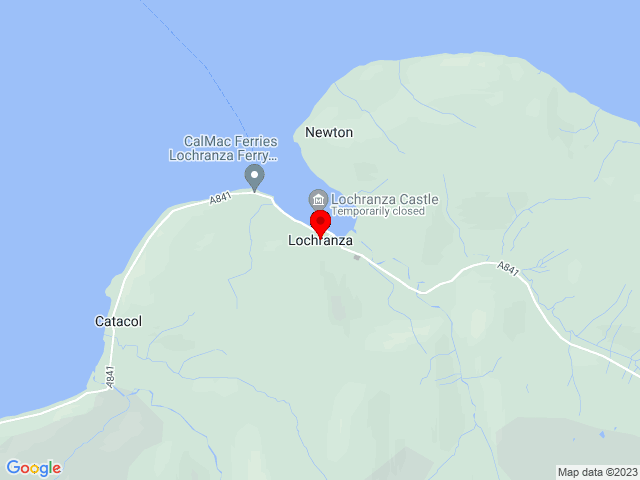 Things to do near Lochranza

What is in Lochranza?

Lochranza on the Isle of Arran is home to Lochranza Castle, Lochranza Bay, and Lochranza Distillery. The village is the location of the Calmac ferry to the mainland at Claonaig, and it is the starting point for walking trails on the Newton Coastal Path.

Lochranza Castle is held in the care of Historic Environment Scotland. The castle was originally owned by the MacSween clan before it passed to the Earl of Menteith, Robert II, the Marquess of Hamilton, and the Blackwood-Davidson family.

When was Lochranza Castle built?

Lochranza Castle dates from the 13th century, but most of it was built in the 16th century.

What visitor facilities are there at Lochranza?

There are no visitor facilities at Lochranza other than the Arran Whisky Distillery. See the distillery information page for details.