Brodick Castle, former home of the Dukes of Hamilton, is a grand 19th-century castle located a few miles north of Brodick on the Isle of Arran.

This quintessentially Scottish castle is surrounded by an exceptionally large and well-maintained garden and country park. The castle features a collection of family-friendly attractions including a Victorian arcade and an adventure play park as well as displays of historic artefacts that can be viewed on a self-guided tour.

There’s a lot to like about Arran. From the tranquillity of Holy Isle to the monumental peaks of Goatfell, this small island off the west coast of Scotland seems to have a little bit of everything required to keep tourists happy.

Looking for wild, off-grid walks with jaw-dropping mountain scenery? Just head to the north of the island where you’ll find one of the best mountain ranges outside the Highlands.

Looking for picturesque woodlands to get yourself lost in? Drive to the south where you’ll find some of the thickest conifer forests outside of Perthshire’s big tree country.

Like historic attractions? You won’t go far wrong with a visit to Brodick Castle located a few miles north of Arran’s main town.

Brodick Castle is every bit the typical grand Scottish fortified building you’ll find elsewhere in the country but it sits at the top of most tourists ‘must visit’ lists due to its location which is as much a draw as the main building.

Having visited the place recently I have to say I can see exactly why it’s so popular. The castle is impressive enough, but those grounds are something that need to be seen to understand why they’re such a tourist hotspot.

Arran is often called ‘Scotland in miniature’ and I guess you could say Brodick Castle is ‘Arran in miniature’. The gardens are surprisingly big and there’s more than enough to see and do to keep families busy for the majority of the day in addition to the stunning mountains and the history that can be found in this corner of the island.

The formal gardens are immaculately well-kept and feature a dazzling collection of plant specimens from across the globe, collected by the Hamiltons during their extensive overseas voyages.

Thick, exotic rhododendrons sprawl across the ground next to impossibly-huge Jurassic Park-style ferns with stems so thick you can barely stretch your fingers around them.

A spiders-web of secretive paths lead off in every direction through wild thickets of strange-looking bushes, gigantic flowers and towering conifers, all framed by the stunning backdrop of Brodick Bay and the scenic Firth of Clyde. Meanwhile, oddities like the seashell-adorned Victorian summerhouse are stumbled upon whenever you least expect it.

I don’t think I’d be too far off-track if I said the gardens of Brodick Castle are some of the best in Scotland.

Getting to the castle is easy as you just need to follow the A841 north out of Brodick, and as it’s only 2 miles to the ferry terminal you could easily cycle there if you’ve organized a day trip on Arran’s ever-popular coastal road.

Alternatively you could always walk, but I’d plan the best part of an hour to get there from the terminal, especially if you’ve never been on the island before.

Facilities-wise, this historic attraction is one of the better ones with ample parking, disabled access in most areas, loads of kids activities and lots of paths and self-guided trails, plus there are plenty of picnic spots and grassy areas to enjoy the occasional sunny day we get here in Scotland.

Things to do at Brodick Castle

You could easily spend all day just enjoying the grounds without even venturing inside the castle so thankfully the NTS offer separate tickets for the gardens which are half the price of the full tickets. That’s pretty good value considering the grounds include a good-sized children’s play park and a recently-upgraded café.

If you’re feeling adventurous you could split your day between the castle grounds and the surrounding countryside which comprises the seafront to the east and an expansive forest to the west – both within easy walking distance – while the main route to Goatfell skirts alongside the castle and is easy to follow from the road that leads to the exit.

The castle, meanwhile, is an impressive-looking building that somehow looks much older than it’s 19th-century construction would have you believe.

Although a fortress has existed on the site from at least from the fifth-century, Brodick Castle as we see it today was built in the 1840s when the 11th Duke of Hamilton began a massive construction project that saw the original fort triple in size.

It’s a shame then that the self-guided tour around it is so short and there seems to be a huge amount that’s missed out on the route.

To be honest, when I visited I felt a bit short-changed by the end of it and I don’t think my leisurely walk through the few rooms that are open took more than half an hour, and that’s with a good look around the obligatory gift shop at the exit.

Still, it was interesting enough and the attention to detail in each room is as meticulous as every other historic building that’s managed by NTS. Most of the areas that are open to visitors have impressive collections of period furniture, silverware and paintings and you’ll get a good feel of the aristocratic luxury that the Hamilton’s enjoyed throughout the 500 years they lived there.

I have to say though, if you’re visiting Arran on a holiday it’s worth paying the extra to get a castle ticket if only to learn a little bit about the Hamilton legacy and the reason why the surrounding gardens are so impressive.

Most of the plants you see today can trace their roots (no pun intended… or was it?) back to the 6th Duchess of Montrose who sponsored expeditions in the 1920s to China, Tibet and South America.

Those voyages brought back rare specimens of plants that would struggle to grow elsewhere in Scotland but thrive on Arran due to the micro-climate that provides a mild temperature and a very low chance of snowfall, which coupled with Scotland’s heavy rainfall leads to weather conditions that are almost unique in Britain.

If you’d like to follow in the footsteps of the early pioneers who discovered Brodick Castle’s incredible collection of plant life there’s a Plant Hunters Walk behind the walled garden that will show you some of the specimens they returned with. Another option is to follow the arts trail that will take you through a collection of modern artworks located in the western edge of the grounds.

If you’d like to join a tour of Scotland’s best castles take a look at my recommended Get Your Guide castle tours. 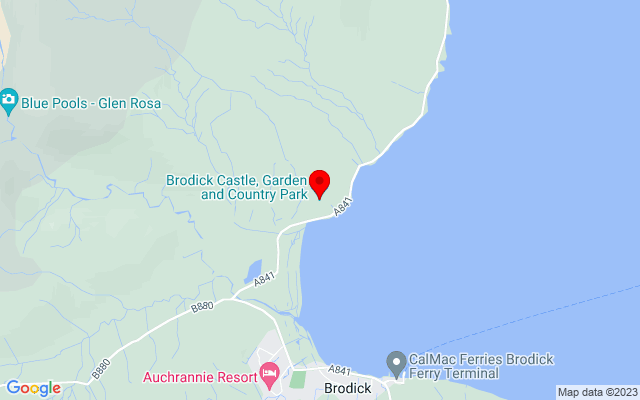 Things to do near Brodick Castle