Holy Isle is located close to the eastern shore of the Isle of Arran on Scotland’s west coast. This small (one square mile) island has a rich religious history dating back hundreds of years and the tradition of quiet seclusion continues to this day thanks to the Centre for World Peace and Health located on the western edge of the isle.

Visitors are welcome to walk around and enjoy the landscape on the many paths that circle Holy Isle and there are some beautiful views across Arran and the Firth of Clyde to be enjoyed from the top of the 1,000-foot summit.

If you’ve been researching places to visit in Scotland you might already know about the Isle of Arran, the small island off Scotland’s west coast that’s an easy journey from the country’s biggest city, Glasgow.

It’s a stunning little island that really does have something to offer everyone whether it’s a quick hike up a mountain (see my guide to Goatfell), a cycle through picturesque forests, or cycling around the amazing coastline. There’s even a bucket-load of history with Brodick Castle and the Machrie Moor standing stones drawing crowds of visitors throughout the year.

What you might not know about Arran is that it has a smaller isle located less than a mile from the shore of Lamlash Bay on the eastern side. Holy Isle isn’t exactly big but it’s a fascinating place and I have to say it was the highlight of my last trip to Arran.

When I say it’s not exactly big I really do mean it. Just under 2 miles long and just over half a mile wide, Holy Isle is only really suitable for an afternoon excursion and there are a few reasons why you shouldn’t stay longer, which I’ll explain later.

The island has a spiritual history dating back at least 600 years and you’ll find religious remnants all along the western side including a spring that’s reputed to have healing powers and a hermit cave where the 6th-century monk St. Molaise lived.

The spiritual tradition continues to this day with the Centre for World Peace and Health Buddhist community that offers residential courses and retreats at a large converted farmhouse near the ferry jetty, as well as a closed retreat on the southern point of the island.

Although Holy Isle is privately owned it’s still possible to visit it as a tourist via the ferry from Lamlash Bay, or you could do what I did and kayak out there. Both options are good fun although if you can, I definitely recommend sailing out there in a kayak as the views are fantastic.

The stretch of water between Lamlash Bay and Holy Isle is sheltered so you won’t have to worry about rough seas (most of the time) and the water is beautifully clean. Expect to see lots of fish, jellyfish and marine plant life as you paddle around the bay.

If it was a bit warmer I’d have jumped out and gone for a swim but hey, this is Scotland and I’m not that brave.

While it’s possible to kayak around the entire island the sea gets a little choppy on the eastern side that borders the Firth of Clyde so it’s probably best to stick to the Lamlash Bay side instead.

You can land pretty much anywhere you like but be aware it’s not permitted to intrude on the island’s southern edge near the lighthouse as that’s where the isolated retreat is located. Thankfully there’s a decent-sized jetty at the other end of the island near the converted farmhouse.

There are a couple of rules once you get on Holy Isle which must be observed, the first of which is no littering and the second is no overnight camping.

That’s completely fair in my opinion as the community has worked long and hard to promote the island as a wildlife reserve and they’ve gone to great lengths to promote nature with a native tree planting programme on Holy Isle’s northern edge.

The only other request is that day visitors stick to the main paths which is partly due to the conservation aspect, partly to do with respecting the Buddhists and partly for your own safety when you climb the 1,000-foot Mullach Mor hill in the island’s centre.

The lower slopes of Holy Isle are ringed by a stony beach that’s interspersed with a few sandy stretches and there are fairly rough sweeps of heather and gorse as you near the foot of the hill but these areas are easy enough to walk through thanks to the makeshift path that’s trodden around the perimeter of the isle.

It won’t take long to walk around Holy Isle, an hour or so perhaps, but you’ll no doubt stop to take a gazillion photos so plan on doubling that number unless you also intend to climb the central hill in which case you can expect to be on the island for 3-4 hours at least.

Things to do at Holy Isle

From the jetty on the Lamlash Bay side you’ll see the retreat is decorated with Tibetan flags and artworks and you might see the occasional monk working. The mix of the traditional Scottish farmhouse and the Buddhist decorations makes for a great photo opportunity but in the spirit of giving the residents their privacy it would be a good idea not to spend too long there.

From the ferry jetty you’re free to follow the rough path in either direction but I recommend heading south along the shoreline. This will allow you to take in the views across the bay towards Arran as well as view a series of Buddhist artworks that have been painted onto some of the larger rocks at the foot of the scree slopes. You’ll also find the St. Molaise cave and the holy spring midway along.

Don’t be surprised if you stumble across a few curious animals during your walk as there are herds of wild Eriskay ponies, Saanen goats and Soay sheep meandering about. The goats seem to enjoy the beaches while the ponies can be found wandering through the bracken so wherever you go you’re guaranteed to pass them at some point.

The landscape flattens a little on the southern end of Holy Isle which is where you’ll find the smaller off-limits retreat and a small lighthouse but if you continue along the path you’ll skirt around these buildings and will eventually find yourself at a waypoint marker.

From here you have two options, either continue around the coastline to explore the eastern side of the island or head up the path that leads you to the summit of the hill.

If you continue along the path you’ll find the terrain is almost identical to the Lamlash Bay side although you will instead be presented with the Firth of Clyde and the mainland a few miles beyond. There’s a small unmanned lighthouse a bit further up but not much else so I recommend backtracking and following the path that leads up to the Mullach Mor summit instead.

This path is relatively easy going for the first third but gets progressively steeper the higher up you go. I’m not talking Mount Everest-style epic climbs or anything but be prepared for a bit of a scramble over rocks and boulders. I’m certainly glad I had the foresight to wear walking boots anyway (here’s a link to my favourite Berghaus boots on Amazon).

Oh, and one word of caution as you near the top. There are a few hidden crevasses just off the path that are made worse by lots of loose scree on the slopes, so for your own safety you HAVE to stick to the path. There’s a small blue rope fence that borders the crevices so when you see it make sure you follow it precisely.

The bracken and gorse rapidly thin out as you near the highest point of Holy Isle so the path occasionally gets a bit lost but once you get the top of the hill it levels off to a surprisingly flat plateau with a trig point in the centre that marks the pinnacle of the windswept Mullach Mor.

My second warning is that the downside of visiting in the warmer months is that the midges are horrific so please make sure you’ve packed a canister of Smidge (amazon link) in your bag.

I know the photos on this page look nice but to be honest they’re the only ones I managed to snap while holding my breath and wiping swarms of midges off the camera lens. The rest of the time I was firing off shots at all angles while brushing the wee sh*ts out of my hair and getting eaten alive on every exposed strip of skin.

As much as I’d liked to have munched my cheese sarnie at the top of Mullach Mor I was probably there only 5 minutes before I admitted defeat and headed back down to the shoreline.

I’ve written a Complete Guide to Scottish Midges that will help you cope with the wee beasties as well as a Guide to the Best Midge Repellents.

Other than that I have to say I really enjoyed my visit to Holy Isle and it was every bit as enjoyable as my ramble up the breathtaking Goatfell. If you find yourself on Arran with no idea what to do you might consider a trip to this beautiful wee island. 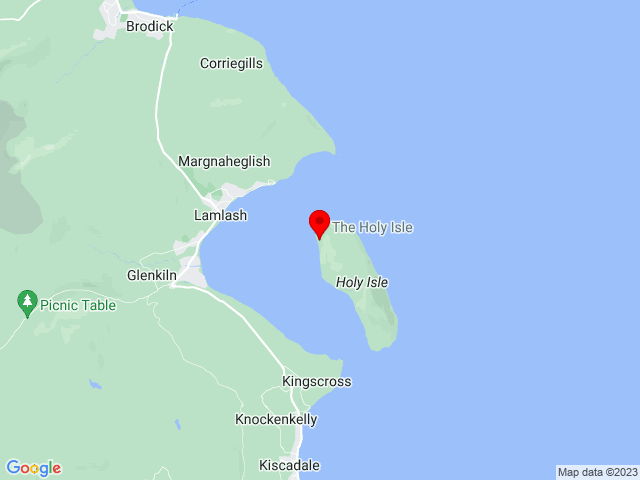 Things to do near Holy Isle

Does anyone live on Holy Isle?

Holy Isle in Lamlash Bay, Arran, is home to a community of Buddhist monks who follow the Kagyu school of Tibetan Buddhism. There are approximately 30 residents on Holy Isle.

How much does it cost to visit Holy Isle?

There is no fee to visit Holy Isle other than ferry costs. See the official Holy Isle website for details.

Until 1992, Holy Isle was owned by Kay Morris, a devout Catholic who sold the island that year to the Samye Ling Buddhist Community. The island is still owned by the Buddhists as of 2022.

What visitor facilities are there at Holy Isle?

There are no facilities on Holy Isle unless you are visiting the Centre For World Peace and Health. Visit the CFWPAH website for updated information on available facilities.

Find unique Scottish gifts in the Out About Scotland Etsy shop