Edinburgh Castle is Scotland’s most-visited attraction. Dominating the city skyline, the castle sits on Castle Rock at the upper end of the Royal Mile.

The world-famous Edinburgh Castle doesn’t really need an introduction as pretty much every visitor to Scotland will have researched it at some point before leaving home, which is perfectly understandable as it’s Scotland’s most-hyped tourist attraction.

The fact that the castle is so famous means that annual visitor numbers are huge (over 2 million), and it holds the prestigious title of being the most-visited attraction in Scotland, officially second only to London for being at the top of international tourist’s British Isles itineraries.

In fact, out of all the visitors who come to Scotland each year, over 70% claim that a visit to Edinburgh Castle is their top priority.

The castle dominates the city skyline where it sits perched at the very top of Castle Rock at the upper end of The Royal Mile, with the equally spectacular Holyrood Palace sitting at the bottom.

In my opinion it encapsulates everything that’s great about the best Scottish attractions. It’s impressively big, hauntingly beautiful, very old, utterly fascinating and is situated in an incredible location.

There are lovely old buildings to walk through, lots of interesting artefacts to look at, some really good museums to wander around and more exhibitions, shops and cafes than you’ll likely be able to fit into one day.

Things to do at Edinburgh Castle

You can reach the entrance to the castle by following The Royal Mile to the very end of its northernmost point, and upon arriving at the area you’ll be presented with a magnificent open courtyard in front of you.

This area is where the world-famous Edinburgh Military Tattoo takes place each year, where military bands and performers from all over the world come together to entertain a quarter-million tourists annually watched by upwards of 100 million people on television.

RELATED POST:  The Complete Guide to Visiting Leith in Edinburgh

All around the castle sheer cliff faces can be seen which give an indication of what an impenetrable fortress it was for hundreds of years, but the approach up The Royal Mile from the eastern side of the city is relaxed and affords a pleasurable walk past street performers and souvenir shops.

Once through the main gate you’ll find the ticket centre to your right and after purchasing your ticket you can follow the narrower path into the castle’s outer area known as the Argyll Battery.

But before going any further it would be wise to pick up a copy of the castle map which is handed out free to ticket holders as the site is pretty damn big and if you don’t have directions there’s a distinct possibility you’ll miss out on some of the best sights.

Within the courtyard of the Argyll Battery is the One O’ Clock Gun where a British Army gunner fires a cannon-shot (not live thankfully) at precisely one o’clock every day. Just make sure you get there early because it draws quite a crowd.

The gunshot was initially intended to alert the ships moored along the Firth of Forth that the time was exactly 1pm, in conjunction with a visual cue on a mast sited on the top of Nelson’s monument on Calton Hill. Nowadays the One O’ Clock Gun is mainly ceremonial, but it’s still an exciting display to watch.

The large building on the south side of the battery is the Governor’s house which is today used as the castle’s administrative building as well as the officer’s mess for the remaining military personnel stationed at the castle.

As you look in this direction and slightly to the right you’ll also see the castle tea rooms which offer top quality food and at the rear of this building is an expansive window that provides great views across the city.

Heading towards the southernmost point of the courtyard you’ll come across the New Barracks which were completed in 1799 with the intention of housing the 600 soldiers that used to be permanently stationed at the castle.

To the west is where you can find the nearby National War Museum of Scotland which was originally a store for munitions. The museum now displays exhibits from Scotland’s military history and you can find original examples of military artefacts and uniforms from over 400 years ago right up to the present day.

If you follow the steep winding path upwards to the inner part of the castle you’ll pass through Foogs gate, and through the gate to the left you’ll see a shop housing an impressive selection of Scotch whisky. Interestingly, this building was actually built to house the castle’s fire station and the large cisterns that used to collect rainwater can still be seen today.

As you walk around the small courtyard near the shop you can’t fail to see Mons Meg – a massive artillery cannon that was built in the 15th-century and given as a gift to King James II.

Unfortunately, it was made unusable after the barrel burst during an official ceremony in 1681, but its credentials as a powerful weapon can still be seen by the collection of cannonballs piled up on the ground, each weighing an incredible 300 pounds.

This building was built as a private chapel for the royal family by King David I and was constructed to honour the memory of his mother, St. Margaret of Scotland. Since being used as a gunpowder store in the 16th-century it has been fully restored and it’s now a favourite attraction inside the castle.

Next, follow the path around the upper level of the half-moon battery and you’ll find the Palace Yard which is a 15th-century courtyard surrounded by the Royal Palace, the Great Hall, and the Queen Anne building.

The Royal Palace is perhaps the most dramatic section of the entire castle complex as it houses not only the royal apartments where the legendary Mary Queen of Scots took residence but also the great crown room which houses the Honours of Scotland.

These artefacts are the Scottish equivalent of the Crown Jewels held in the Tower of London and they’re no less impressive, comprising a crown, sceptre and the Sword of State. The Stone of Scone – the ancient stone on which Scottish monarchs were crowned – is also held within the vaults of the crown room.

The adjoining Great Hall should be the next building you visit as the spectacular collection of weaponry is a sight to behold. Originally built for formal occasions such as meetings with heads of state, the Great Hall houses fine examples of Scottish tapestries and ancient weaponry.

Be sure to keep an eye open for the Claymore, a four-and-a-half foot long sword that’s so big you’ll wonder how someone could even lift it off the ground, let alone swing it at an opponent.

Adjacent to the great hall is the Queen Anne building which was once a military museum but has now been converted into a function suite and education centre. You’ll also find another tea room here which is a great place to stop and take a break if you find your feet are aching after so much walking.

Across the courtyard, you can see the Scottish National War Memorial which was used as a barrack block and arsenal in previous lives. Although the arsenal was demolished in 1755 the masonry was reused to build the memorial which commemorates the fallen British military personnel who have died in conflicts since WWI.

Inside you’ll find stone plaques dedicated to all three services; Army, Navy and Air Force, with an altar placed on the highest point of Castle Rock. Stained glass windows flood the interior with light while a sealed casket containing the names of over 200,000 fallen soldiers can be seen in the hall.

There are plenty of other exhibitions and galleries to view as you make your way around Edinburgh Castle and it may not be possible to fit them all into one day. I’d recommend purchasing a Historic Environment Scotland membership which will allow you free return visits to this and hundreds of other historic attractions for a reasonable one-off cost.

If you want to discover other attractions in the city read my Guide to the top 25 Places to Visit in Edinburgh.

The history of Edinburgh Castle

The earliest known settlement in Edinburgh was located at Castle Rock, the enormous rock formation that rises up from inside the heart of the city.

RELATED POST:  The Complete Guide to Visiting the Isle of Arran

Archaeologists believe that wandering groups of people have inhabited the site as far back as the Iron Age but it wasn’t until the sixth century AD that unified tribes began to build their strongholds throughout Scotland.

At this point in the nation’s history there were four major kingdoms, and it’s from these disparate groups of people that Scotland was born. To the north were the Picts, to the far west were the Scots, to the west were the Britons, and to the south-east were the Angles, and unfortunately they did not lead a peaceful co-existence.

For over two hundred years these four kingdoms brutally fought each other, until in the 9th-century the King of Dal Riata – Kenneth MacAlpin – brought them together under one banner to create a nation similar to the modern Scotland we recognise today.

However, one of the most powerful tribes during those turbulent years were the Votadini – and it’s this group which established the territory known as Lothian from which all the modern districts surrounding Edinburgh eventually emerged.

Over time the Votadini were integrated into neighbouring tribes and by the 7th-century a tribe known as the Gododdin had built a hill fortification on top of Castle Rock. This fortification was called Etin by the Gododdin, which changed into the name Edin in later years.

Historical records state that later in the 7th-century English forces captured an area in Scotland that had a fort situated on top of a rock, and that they named this place Eiden’s burgh.

Records of the earliest beginnings of the castle are scarce but it seems that by the middle of the 10th-century Northumbrian nobles had decided to make it the location of their permanent residence, which in turn led them to build increasingly fortified walls as protection from neighbouring rivals.

The castle had become a place of royal residence by the reign of David I in the 12th century, and it continued this role for the next five hundred years until it was converted into a military complex with a large garrison in the 17th-century.

The castle served Scotland as a site of strategic importance for many years thereafter and was pivotal to the story of the Jacobite uprising, and in fact many historians claim that Edinburgh Castle is one of the most besieged castles in the world with 26 recorded sieges held against it throughout its history.

Today, the castle is under the care of Historic Environment Scotland, the organisation that takes care of and preserves the majority of the nations historic buildings, and the castle is proud to serve several important modern-day roles.

I think it’s fair to say that Edinburgh Castle has one of the most interesting histories of any building in the world.

If you’d like to explore more Scottish castles read my Guide to the Best Castles to Visit in Scotland. 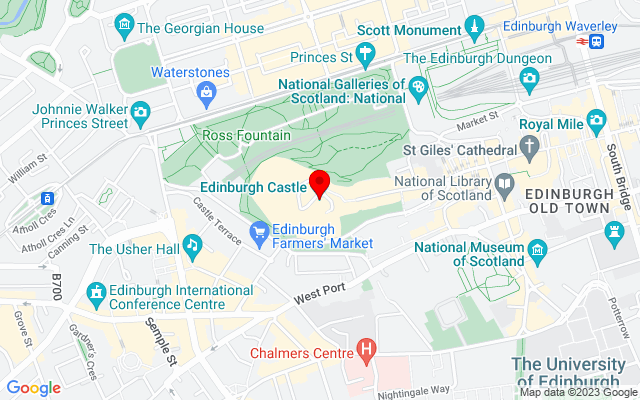 Hi there! I’m Craig, I live in Edinburgh and I’m obsessed with tourist attractions. In this website I’ll show the best Scottish attractions and events and give you loads of tips for making the most of your time in Scotland. Follow my adventures on Pinterest, Facebook, and YouTube.