Princes Street Gardens in Edinburgh is one of the largest public spaces in the city. Originally a body of water called the Nor Loch, the gardens were designed in the 1770s but weren’t created until 1820 when the loch was drained.

Today, the gardens are a popular recreational area that features a number of popular landmarks including The Scott Monument, The Ross Fountain and The Ross Bandstand.

Princes Street Gardens are located in the heart of Edinburgh adjacent to Princes Street (no surprises there…) and between Waverley train station at the eastern end and Lothian Road to the west.

The Scottish National Gallery and The Mound cut the gardens in two, with the western section roughly twice the size of that on the east, and both are bisected by the city’s main railway line.

As far as major city parks go, Princes Street Gardens isn’t particularly big, but because of its location it’s one of the most-visited public spaces in Scotland and certainly one of the most attractive.

For rail passengers, the gardens will likely be the first sight they see when they leave the station but even though they will no doubt be itching to explore the city there are lots of reasons why the gardens should be their first port of call to soak up Edinburgh’s incredible atmosphere.

As far as top-tier attractions go, Princes Street Gardens are most notable for the monumental Gothic spires of The Scott Monument which dominates the east garden and is one of the most recognizable structures in the city.

Other highlights are the twin buildings of the Scottish National Gallery and The Royal Scottish Academy, which are two free-to-enter museums that contain one of the greatest collections of artworks in Britain, if not Europe.

Meanwhile, the west gardens are home to a number of monuments including the Ross Fountain and Ross Bandstand, a number of war memorials and the historic Church of St. Cuthbert, all overlooked by the enormous hulking mass of Castle Rock and Edinburgh Castle.

Suffice to say, if you visit Princes Street Gardens you’re not exactly going to be short of things to look at.

The gardens were originally created in the 1820s when the Nor Loch – a body of water below Edinburgh Castle – was drained as part of the city’s vision to expand Edinburgh beyond the polluted slums of the Old Town.

It was a massive undertaking that began in the 1760s and lead to the stunning Georgian buildings that now make up the majority of the city north of the gardens. When the loch was finally drained it was transformed first into a private garden in 1821 and then into a public garden in 1876 when the city council acquired permanent ownership.

Today, Princes Street Gardens continues to be a well-used place of leisure for locals and is a top-tier attraction for tourists, as well as serving as a music venue and the site of the ever-popular Edinburgh’s Christmas festival.

The Christmas festival is fast becoming the largest in Britain. It centres around the east garden where a large German pop-up market is created each year that sells everything from hand-made arts and crafts to giant Bratwursts and piping-hot cups of mulled wine.

There’s also a fantastic funfair and a children’s winter wonderland as well as live music at the Ross Bandstand. If you intend to visit Edinburgh at Christmas you really have to spend time at the Christmas Market while you’re there.

The gardens are beautiful year-round but they really come alive in summer when the thick coppices of trees hang heavy with leaves and the flower borders are ablaze with colour.

The entire site covers 37 acres so it offers lots of nice walks on the network of paths that thread through it, but most people choose to stick to the northern edge that runs alongside Princes Street.

That’s a bit of a shame as there is an even nicer walk on offer if visitors cross over the railway bridge in the middle of the west gardens where a small hill at the foot of Castle Rock offers lovely views across the New Town and an occasional glimpse of the Firth of Forth.

If you’d like to explore the gardens as part of your visit to Edinburgh I recommend you start by walking to the far end of the east garden where you’ll find the entrance at Waverley Bridge opposite the entrance to Waverley Mall.

This shopping mall is a decent place to take a quick stroll and there are lots of fast-food restaurants and cafés on the lower level, as well as souvenir clothes shops on the upper level, but to be honest you’ll find a much nicer shopping experience along Princes Street and in the new St. James Quarter.

From the Waverley Bridge entrance, head to the Scott Monument and climb up the 288 steps to the platforms at the top where you’ll find some of the best views in the city. The monument is dedicated to the Edinburgh writer Sir Walter Scott who wrote many of Scotland’s most-loved novels and it is, in fact, the largest monument to a writer anywhere in the world.

After you’ve toured the monument (there’s a small fee to enter, by the way) head back onto one of the multi-level footpaths and point yourself in the direction of the Scottish National Gallery.

Along the way you might like to stop at the small café in the gardens on the level of Princes street as it has outside seating, but if it’s busy – which it almost always is – I recommend popping into the gallery café instead as it has a new upgraded outside terrace with superb views across the east garden.

From there cross over the square and head to The Mound at the entrance to the west garden, or take a look inside the gallery which is free to enter and definitely worth exploring if you’ve never been before.

The gallery features a collection of priceless Scottish artworks as well as masterpieces by Rembrandt, Vermeer, Botticelli and other international artists. There’s more than enough to see to keep you occupied for a couple of hours and the gallery is a great introduction to Scottish culture and history if this is your first visit to the country.

Once inside the west garden there’s another network of paths to follow which splits off at two levels so I recommend walking along the top level next to Princes Street and then back down the lower level with cuts through the middle of the garden.

There are several points of interest on the top footpath including The Royal Scots Greys Monument and the memorial to Wojtek the Polish soldier bear, while the middle of the garden is the location for the Ross Band Stand which dates from 1935 and is still used as a music venue to this day.

The far western edge of Princes Street Gardens is home to the stunning decorated cast-iron Ross Fountain which has just undergone a multi-million-pound refurbishment and is now in full working order.

From this point you’ll get one of the best views in the city of Edinburgh Castle and there’s the added bonus of a nearby café where you can grab a coffee and hot food.

Behind the Ross Fountain lies the extraordinarily atmospheric St. Cuthbert’s which is the oldest Christian building in Edinburgh.

If you manage to find it open when you arrive I recommend taking a wander inside as it’s very ornate, but don’t forget to also look at the graveyard which dates back to the 7th century.

If you’ve got children with you that find all that history boring beyond belief, you’ll be pleased to know there’s a nice wee play park in the gardens next to the Ross Fountain, and the exit onto Princes Street is located a short distance away in the corner of the park if hungry bellies are starting to demand food.

Otherwise, you can continue walking through the gardens on the lower path which passes a couple of memorials before circling behind the Ross Bandstand where a bridge crosses over the railway line to let you explore a small hill under the castle.

This is my favourite part of the gardens as it’s a wee bit secluded so it’s quieter than the manicured lawns to the north and the small hill allows lovely views of Princes Street.

There’s not too much more of the gardens to see after this point so you have the option of following the path to The Mound where you can then explore Edinburgh’s Old Town and The Royal Mile, or you can head back to the bandstand and walk back to the garden entrance where you’ll pass the historic Gardener’s Cottage (closed to the public, unfortunately) and the Royal Scots Monument. 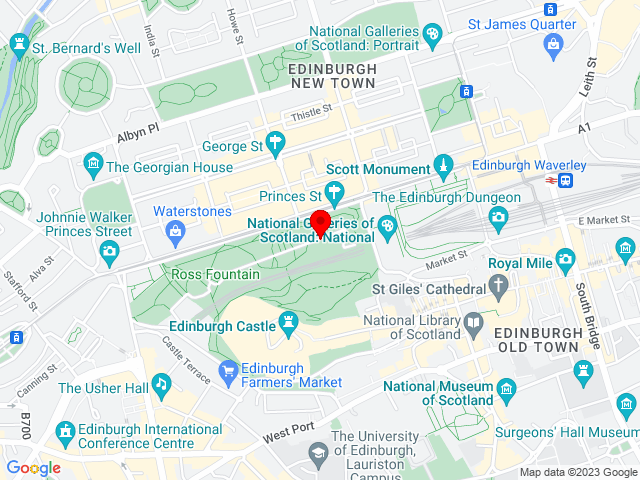 Things to do near Princes Street Gardens

From the Scott Monument:

When did Princes Street Gardens open?

Princes Street Gardens were designed in the 1770s, but they were not officially opened until 1820 when the Nor Loch – the body of water beneath Edinburgh Castle – was drained.

What’s on Princess Street in Edinburgh?

Princes Street is home to a number of high street shops.
Princes Street Gardens are home to; The Scott Monument, The Scottish National Gallery, Waverley Train Station, The Ross Fountain, and The Parish Church of St. Cuthbert.

Are there toilets in Princes Street Gardens?

What visitor facilities are there at Princes Street Gardens ?