Contents show
1. About Leith
2. Visiting Leith
3. The history of Leith
4. Directions to Leith
5. Things to do near Leith
6. Accommodation near Leith
7. FAQ’s about Leith
8. More places to visit in Edinburgh

Leith is a historic district in Edinburgh that centres around the Water of Leith, Leith harbour, and the restaurant-packed Shore.

Visitors will discover a rich maritime history that revolved around shipbuilding and fishing but Leith is now best known as a popular tourist destination thanks to its combination of trendy bars, award-winning restaurants and attractions including the Royal Yacht Britannia and the Ocean Terminal shopping mall.

As any visitor to the city will know if they climb one of its many hills, Edinburgh borders the Firth of Forth along the entire length of its northern side.

The location of Edinburgh and its proximity to the North Sea are the main reasons why it became such an industrial powerhouse and the harbour at Leith was instrumental in the growth of Scotland as an important trading partner with Europe.

Although the industrialised areas of Leith are still in use today with the extensive dockyard welcoming ships from all over the world, Leith is nowadays recognised more for its trendy bars and restaurants than the ships that sail in and out of the port.

That wasn’t always the case though and for many years Leith was a deprived area with desperate levels of poverty and a high mortality rate (author Irvine Welsh based his story ‘Trainspotting’ on Leith’s poorest areas).

Thankfully, the district has changed beyond all recognition since those days and it’s now regarded as one of the premier hipster hotspots in Scotland thanks to a massive program of regeneration that has been ongoing for the last twenty years.

Tourist attractions of modern Leith are the Ocean Terminal shopping centre with its superb collection of shops and restaurants, the Royal Yacht Britannia that’s permanently moored alongside it, and the Shore district which is chock-a-block full of restaurants – many of which are the best in Edinburgh.

The events that are staged throughout Leith are pretty good as well with highlights including the Saturday-morning Leith farmers market near the Water of Leith river which has become a bit of a foodie mecca, and ‘Leith Late’, an annual multi-arts festival held every June where some of the country’s best up-and-coming artists get to showcase their art to the general public.

If you want to get social you’ll find Michelin-starred restaurants like The Kitchin and Wishart serving sumptuous meals in impressive 17th-century buildings and The Vaults – the main site of the Scotch Malt Whisky Society – lies just around the corner from the Edinburgh Blues and Jazz Festival venue.

You’ll find more places to visit in Edinburgh in my Edinburgh Attractions pages.

As far as iconic areas of Edinburgh go, they don’t get much better than Leith. While the buildings aren’t quite up to the thousand-years of history you’ll find in The Royal Mile they’re attractive in their own industrial-revolution way with tall Victorian tenements jostling for space next to converted 18th-century warehouses.

The heart of the district is arguably the Water of Leith which winds its way from the Colzium Hills in the Pentland Hills to its final destination at Leith harbour.

The river sports a collection of restaurants and bars along its length and once you get to the Shore I can’t think of anywhere I’d rather be on a lazy Sunday morning than sitting in one of the kerbside cafés looking out over the river and the Firth of Forth beyond.

Lining the streets that surround the Water of Leith is a collection of charming wee off-beat souvenir shops where you’ll find everything from antiques to collectable books but if you prefer your shopping to be a wee bit more modern you’ll likely want to head west a half-mile or so to wander around Ocean Terminal.

This shopping mall is often the first port of call for tourists who enter the city from the cruise ships that dock at Leith Port and it’s also the location of the Royal Yacht Britannia which is one of Scotland’s most-visited tourist attractions.

Regular bus services are ready to whisk visitors from Ocean Terminal to the city centre and back but there are more than enough activities to keep you busy in the mall so you might like to leave the rest of Edinburgh for another day.

Ocean Terminal boats a cinema, a plethora of restaurants, a gym, and a play park in addition to the shops and cafés on the upper-level terraces that look out over Leith docks and the Firth of Forth.

If you take a walk back to the centre of Leith I recommend following either Ocean Drive or Victoria Quay which runs past the Scottish Government building before veering back inland to Commerical Street.

There are too many highlights to mention for grabbing lunch or an evening meal but I have to give a mention to The Kitchin and Wishart for their fine dining and Tecuchters Landing for its fun atmosphere.

If you’re feeling the need for a treat take a walk to Mimi’s Bakehouse which serves some of the best baked produce in the city and Crolla’s Gelateria has the best ice-cream you’re ever likely to taste outside of Italy. It really is that good.

The history of Leith

The earliest records of Leith date back to the 12th-century but it wasn’t until the 1500s that the port began to play an essential role in Scotland’s industry when everything from glass, soap, and whisky was transported in and out of Leith docks for domestic and overseas sale.

This in turn lead to the rapid development of many of the great industries that powered Edinburgh, with one of the most important being the now-long-gone shipbuilders.

Leith’s shipbuilders reached their pinnacle in the second world war with over 3,000 ships being repaired in the docks and dozens of merchant and Royal Navy vessels undergoing construction in the naval yards that lay between Musselburgh to the east and Granton to the west.

Most of the city’s shipbuilding and repair industries died away due to the shallow water in the mouth of the Water of Leith which made modern ship designs difficult to build, and shipbuilding had pretty much ended completely by the 1980s.

Fortunately, though, since the North Sea oil boom of the late 1970s there has been an ongoing need to berth vessels heading in and out of Scotland’s North Sea oil fields and the wealth from this industry has in part kept Leith alive as an industrial hub.

There are lots of other industries that have died away with the shipbuilders, although not all are missed. Commercial whaling was big business in the 19th-century and the efficiency of the operation lead to Scotland’s whale populations being decimated by the early 1900s.

With Scottish whale stocks depleted the whaling industry spread far and wide in its hunt for fresh harvests and Scottish whaling ships hunted the animals as far-afield as the Arctic and Antarctic.

A shift in Britain’s opinions on the treatment of animals caused the industry to abandon Leith in the 1980s and by the mid-1990s the businesses that had been built on whaling had all disappeared.

By this time Leith had degenerated into slum status with a severe lack of jobs and an increase in drug use causing many life-long residents to flee to other areas of the city.

Thankfully, a series of government-backed schemes began regenerating the area and a soaring number of technology jobs led to many small businesses relocating to Leith thanks to its cheap building rental.

As wealth began to return to Leith the number of bars and restaurants grew and what was once one of the most impoverished areas of Edinburgh suddenly found itself to be one of the most sought-after.

Today Leith is alive with a fantastic collection of bars, pubs and restaurants and its growth as one of Edinburgh’s trendiest districts shows no sign of slowing down 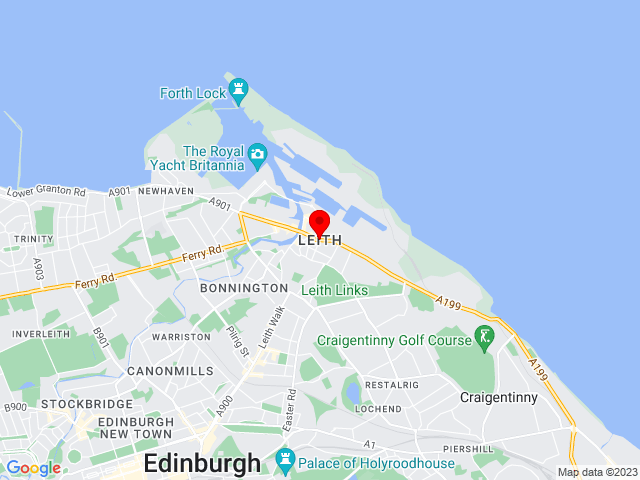 Things to do near Leith

Is Leith a rough area?

Leith is not a rough area – though it once was. Leith was an important maritime port for hundreds of years and was instrumental in the prosperity of Edinburgh. However, after WWII the area declined and it became synonymous with crime.

After a regeneration project was completed in the ’90s, Leith transitioned into a trendy district that’s now best known for its bars, clubs and restaurants.

What does Leith mean?

‘Leith’ originates from the name given to the river which runs through Edinburgh and exits at the historic port. The name means ‘flowing water’ in Celtic.

Can you walk from Edinburgh to Leith?

Leith is now part of Edinburgh and it is easy to walk from Edinburgh city centre to the port – a journey of 2 miles which takes 30-40 minutes.

It is also possible to walk and cycle along the Water of Leith path which takes visitors on a 12-mile journey from Balerno to Leith.

What visitor facilities are there at Leith?