St. Giles Cathedral has been a focal point for religious activity in Edinburgh for over 900 years although the present structure that we see today can trace its roots back to the 14th century.

Due to its central location on The Royal Mile, St. Giles has become a popular tourist attraction and it’s an ideal stop-off point between excursions to Holyrood Palace and Edinburgh Castle.

If you’ve ever looked through photographs of Edinburgh on the internet there’s no doubt you’ll have come across a picture of Saint Giles Cathedral dominating The Royal Mile.

The cathedral’s distinctive 15th-century crown steeple is one of the most viewed features of any building in Edinburgh and it takes its place alongside Edinburgh Castle and Holyrood Palace as one of the top attractions in the city.

St. Giles Cathedral has been a focal point for religious activity in Edinburgh for over 900 years although the building that we see today can trace its roots back to the 14th-century.

The cathedral (like most in Scotland) is covered from floor to roof with detailed carvings and ornate stonework and while not quite up to the standard of British icons like York Minster it can comfortably hold its head up high when placed against its sister cathedral in Glasgow.

St. Giles is still an active place of worship so entrance might not be possible during times of prayer but during the week tourists are free to enter and explore the grand internal chambers and nose around in the wee chapels that line the north and south walls.

There are five services every Sunday and on average fourteen acts of worship take place in St Giles every week, often with the St. Giles Cathedral Choir singing in full voice.

The choir is acclaimed throughout Europe and America and it’s one of those spine-tingling moments you won’t forget if you’re lucky enough to be able to listen to them during the leading of the worship. They’ve released several CDs that can be purchased from the gift shop alongside lots of other souvenirs that can be picked up to remind you of your time in Edinburgh.

As you walk around the cathedral-like main hall (well it would be, wouldn’t it?) you’ll notice four substantial 12th-century central pillars that are the oldest parts of the entire building.

Records show that a fire gutted the majority of the cathedral in the 14th-century and those gargantuan pillars are pretty much all that remains of the original stonework.

Interestingly, although St. Giles has been officially designated as an A listed building and is of the greatest historical importance to Scotland, it’s not in the truest sense of the word an actual cathedral.

If you’ve explored some of the other historic buildings that lie along the length of The Royal Mile you’ll likely have visited John Knox’s house which lies just a short distance from the cathedral in the direction of the palace.

The link between the two historic attractions derives from John Knox being the minister at St. Giles for much of his life and it was the place where he preached his sermons against Mary Queen of Scots.

Knox continued preaching at St. Giles until the end of his days, but not before becoming instrumental in forcing the Queen to flee from Edinburgh.

At the time it was claimed that Mary had conspired with the Earl of Bothwell to kill David Rizzio who was her secretary and suspected lover. Knox seized the opportunity to call for her death in a series of thunderous sermons and eventually in 1568 she had to escape Edinburgh in fear for her life.

Today the legacy of the great reformer is told through a magnificent 19th-century stained-glass window at the south end of the cathedral where he forever stands preaching to the masses at the High Kirk.

Things to do at St. Giles Cathedral

This is a historic attraction that absolutely HAS to be visited if you’re in Edinburgh for a quick city break.

You’ll find it nestled next to the city chambers around half a mile south of the castle and it’s impossible to miss as it sits squarely next to the cobbled paving stones of the city’s historic High Street.

Before you make your way through the doors I suggest taking a quick walk around the outside of the building to marvel at its architecture.

Stained-glass windows soar overhead and Gothic spires rise so high you’ll hurt your neck trying to look up at them. It’s an impressive sight so I hope you remember to take your camera with you when you visit.

Towards the back of St. Giles is a car park that’s nothing out of the ordinary but take a moment to look for the plaque that marks the final resting place of John Knox.

Head through the large entrance doors and you’ll find yourself presented with an information desk and a helpful guide or two (don’t worry about digging your cash out as entry is free) and disabled ramps which lead into the grand inner hall.

Here you’ll be presented with lots of statues, memorials, tapestries, a colossal church organ and of course the vast vaulted ceilings that St. Giles Cathedral is most famous for.

The central chamber is stunning, especially when sunlight floods in through the stained-glass windows which makes the place comes alive in a multi-coloured light display.

If you get the chance you might consider joining one of the free guided tours that are organized throughout the day as they’re by far the best way to learn about Edinburgh and the part the cathedral played in its history.

If a tour isn’t running when you arrive you’ll still have an enjoyable visit, although without really knowing all the points of interest you’ll be in and out in around half an hour.

Unlike many historic attractions in Scotland, this one allows you to take as many photos as you like but you might be asked to turn off the flash in confined areas like the Thistle Chapel. The chapel has an interesting story which you can read about on Wikipedia if you like a bit of royal history.

If you’re not able to visit the cathedral in person you can always have a wander around it at home with the virtual tour further down this page. 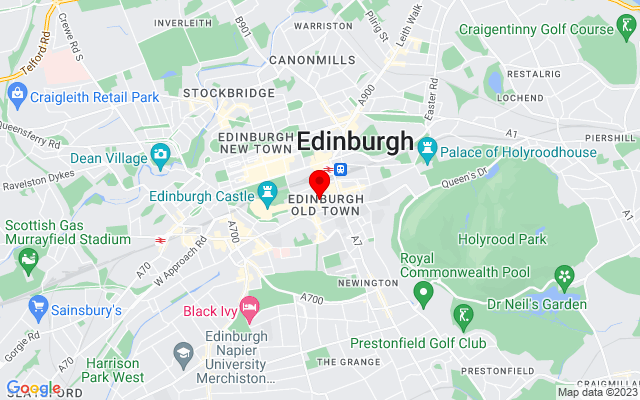 Things to do near St. Giles Cathedral