This Ullapool Hill and The Braes walking trail will take you on a stunning walk from the harbour in the delightful Scottish town of Ullapool, all the way up to the outcrop of Meall Mor and around a circular route through the hills and back to the town centre.

About Ullapool Hill and The Braes

The beautiful town of Ullapool is the starting point for this walk where you’ll begin at the harbour which is a perfect place to take photos of Loch Broom.

The harbour is also a great place to get hot drinks from one of several cafés near it or failing that there’s a supermarket a short walk away where you can stock up on picnic supplies.

The nature reserves around Ullapool are home to a wide variety of Scotland’s wildlife and walkers can enjoy looking for pine martens, wildcats, buzzards and golden eagles as they explore the area.

The surrounding hills draw in thousands of tourists every year who delight in hiking through the thick purple heather in the summertime, but this walk is well worth doing at any time of year.

As you follow the trail you’ll head into The Braes which is a popular hiking area for tourists throughout the year, with the highest point on the rocky outcrop of Meall Mor offering fantastic views of the surrounding countryside.

Don’t forget to take your camera either because the meandering Ullapool River flows into Loch Achall in the distance, which is a brilliant photo opportunity.

Visiting Ullapool Hill and The Braes

The walks around the entire region surrounding Ullapool have to be some of the prettiest in Scotland and thousands of hillwalkers come to the region each year to enjoy the peace and quiet of the quiet crofting communities that surround Loch Broom.

While there are small beaches close to the lochside at Ullapool you’ll find some incredibly beautiful beaches further up the coast at Achmelvich and Clachtoll – frequently described as two of the best beaches in the world.

Once you’re in The Braes you’ll find yourself in the midst of a glorious range of mountains and remote peaks broken up with a smattering of trees and open fields of heather which are particularly lovely in autumn but worth walking through year-round.

There are plenty of spots in this part of Scotland that are great for camping but be aware that there aren’t many tourist facilities here (which I think is a good thing) so make sure you bring plenty of food and fresh water with you on your walk.

And whatever you do, above all else, remember to pack some anti-midge spray if you’re visiting in summer. I personally swear by Smidge, which you can buy from Amazon.

I’d also advise you to have either a map of the area installed on your phone or a paper map in your backpack – both of which can be purchased from the Ordnance Survey online store. Buy OS Explorer Maps direct from Ordnance Survey. 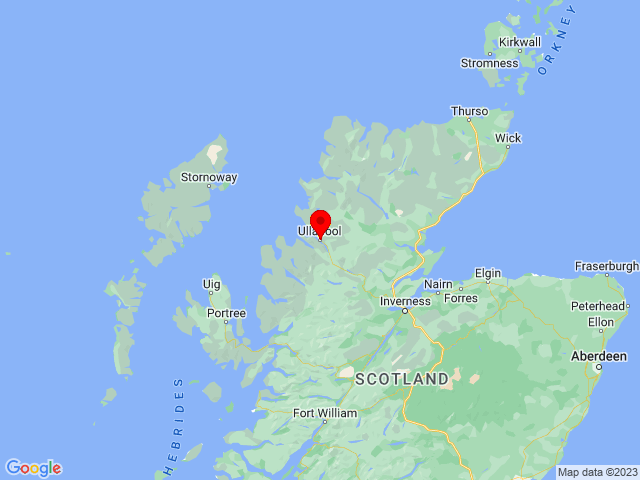 Walking map of Ullapool Hill and The Braes

This walk can be done fairly easily in 1.5 to 2.5 hours, with the total distance coming in at around 5 miles.

The walk is a mixture of town pavements and off-road paths which are in good condition, however they can get fairly muddy after a downpour. The maximum ascent is about 280m which walkers of average fitness should have no problem with.

From the harbour follow Shore Street to the junction of Mill Street and head north up the A835 through the town centre. At the junction of Broom Park road turn off the A835 and head west until you reach the sign for Ullapool Hills. From here you will pass through a wooden gate and begin the climb up into the hills.

The path here is well worn so just follow it until you reach a red and white marker post which is a great place to stop and admire the view over the town. Continue following the main path until you reach a metal indicator which details the view of the surrounding hills and lochs, and keep left at the next path junction.

When you reach the next fork in the path, follow the red markers and climb up to the summit of Meall Mor for some amazing views across Loch Broom and Loch Achall before retracing your steps back to the path fork.

Continue following the white markers on the left until you reach the gate that leads into the forest, head through the plantation, and pass through another gate near a mobile phone tower.

At this point you will be back on man-made roads which will lead you near a housing estate and towards the A835. Turn right at the first T-junction, then right again at the second, and continue down to the pavement onto the A835.

Follow this road all the way back to Ullapool harbour and admire the views at the side of Loch Broom as you walk alongside it.

Things to do near Ullapool Hill and The Braes

Does Ullapool have a beach?

Ullapool has a seafront with a narrow shingle beach on the shore of Loch Broom.
Address of car park: Ullapool IV26 2XB

What is Ullapool known for?

Ullapool is traditionally known as a fishing village, but in recent years it has become a tourist hub due to its picturesque location on the shore of Loch Broom. Ullapool is also a great base for visits to the North Highlands as it’s the largest settlement for many miles around.

Is Ullapool worth visiting?

Ullapool is definitely worth visiting. Tourists have a wide variety of activities to take part in around Ullapool, whether it’s walking in the surrounding hills, taking a boat trip to the nearby Summer Isles, driving the NC500, or enjoying the coastal walks around Loch Broom before returning to the village to sample its superb fresh seafood.

What visitor facilities are there at Ullapool?