If you want to skip my introduction and get straight to the list of places to visit scroll down to the bottom of the page and click the buttons for pages 2 and 3 (but you’ll be missing out on some really useful info about the city…).

What’s the first thing that comes to mind when you think of Glasgow? The River Clyde perhaps, or maybe shipbuilding, Billy Connolly and summer festivals. Or how about Tennants lager, enormous city parks and world-class shopping. All symbols of the city in their own right and all things that Glasgow is rightly proud of.

But for me, Glasgow conjures up images of amazing tourist attractions that some might say (whisper it in hushed tones if you’re in the south-east of Scotland) easily rival those in the tourist-hotspot capital of Edinburgh.

There’s certainly a different feel to Scotland’s biggest city compared to its eastern sibling. It just feels more vibrant somehow, busier, yes, but a bit more friendly too, and in my opinion it’s got an edge to it that mirrors London, but without the oppressive overly-crowded atmosphere of that city.

I have to say I like Glasgow, but truth be told I only recently formed that opinion after deciding to spend a week there at the beginning of 2019.

Before then I’d gone on the occasional day trip but really just for the shopping – which is by far the best in Scotland – and I’d never explored much past the city centre.

What I found during my week-long visit is that this city has a huge, HUGE, amount of things to do and that shopping on Argyle and Buchanan Streets are really just the tip of the iceberg.

The amount of cultural venues in Glasgow is nothing short of gob-smacking and not only are there a fantastic selection of theatres, restaurants, museums, art galleries and tourist attractions but it’s also a hub for creative talent and music, and performers can be seen and heard on virtually every street in the city centre.

It’s a real family city too thanks to the number of green spaces and themed attractions spread across it, and unlike the tourist rip-off prices you’ll find in some places (cough-Skye-cough) many of Glasgow’s best venues are completely free to visit.

Did you know Glasgow is a UNESCO City of Music? I didn’t until I spent a few evenings there but I can now say hand on heart that it definitely lives up to its musical reputation.

You may also like...  The 10 Best Things to do in Edinburgh on a Rainy Day

It has an incredibly exciting music scene and there are so many venues you’re guaranteed to find something you’ll enjoy whether you’re a fan of rock, pop, jazz or even classical, and that’s before you venture into the city at night to experience its awesomely brilliant collection of nightclubs (even for someone like me who’s age 30…and a bit…plus a bit more).

If you’re a mum or a dad you might not be too interested in clubbing till 4 am but rest assured you can enjoy plenty of family-friendly attractions spread out across the city – most of which don’t even have an entrance fee.

Attractions like Kelvingrove Art Gallery and Museum, the Riverside Museum of Transport and The Tall Ship all draw in thousands of visitors each year and there are a dizzying number of fun/educational attractions like the Glasgow Science Centre and the Gallery of Modern Art too.

If you’re travelling solo or as a couple you’ll be pleased to know that this city has more history and beautiful buildings than you can shake a selfie stick at with places like Glasgow Cathedral, The Necropolis and The University of Glasgow amongst the highlights (although there are loads more, some of which I’ll cover later in this article).

Bit of a foodie? Well don’t worry, you’re covered there too. The food scene has exploded in Glasgow in recent years and popping out for a bite to eat has now turned into a bit of an occasion thanks to many of Scotland’s finest seafood, Indian, Italian and fusion restaurants offering mouth-watering dishes whether you’re on a budget of you’re treating yourself to a once-in-a-month blow-out.

And not only have you got all that but you’ll also find yourself mixing with some of the friendliest, warmest, most down-to-earth people you’re ever likely to meet. It’s no wonder the city slogan is People Make Glasgow – it’s true.

How do I get to Glasgow?

One of the reasons the city is so popular is that it’s really easy to get to if you’re visiting from overseas thanks to the excellent transport infrastructure both inside the city and on its outskirts.

You may also like...  A Guide To: Duncansby Head - North Scotland

These buses are ultra-efficient and depart every 10 minutes so you’ll never be waiting long to catch one, plus they operate 24/7 (except for Christmas Day). You’ll find them at the airport stance 1 when you arrive and Buchanan Bus Station stance 46 when you depart. They’re reasonably priced too at just £16 (as of 2019) for a family ticket.

Be warned that Glasgow Airport is big enormous – understandable considering it’s an international travel hub serving more than 30 airlines – and it gets really busy so I’d advise getting transport to your destination as soon as possible.

With that in mind if you want to steer clear of the buses you can grab a taxi from dedicated taxi ranks at the airport entrance or take a train into the city centre from Paisley Gilmour Street station which is around a mile from the terminal.

The other major airport you could use is Glasgow Prestwick (address: Prestwick KA9 2PL) which is quite a bit further out at 32 miles from the city centre but has its own railway station that connects to Glasgow Central Station in 45 minutes.

This airport also has shuttle services to outlying car parks if you’d rather drive and it has bus services that connect to the city centre. Check out the Stagecoach website for further details.

If you want to find out more about Scotland’s airports and how to travel between them take a look at my Complete Guide to Scotland’s Airports.

Another popular way to get into the city is by rail and you can reach the centre from the south of Scotland at Glasgow Central Station or from Edinburgh and the north of Scotland at Queen Street Station.

Both stations are easily accessible from the city centre and make travelling to the rest of the country an absolute breeze, especially if you’re intending to combine a visit with Edinburgh as the train journey between them only takes around an hour.

How do I get around Glasgow?

Much like Edinburgh’s New Town 18th-century design masterpiece, Glasgow is built on a grid system which makes it easy to navigate on foot. There’s also an extensive bus network thanks to the services provided by First Bus and taxi’s can be hailed from pretty much anywhere in the city centre.

You may also like...  A Guide To: Dallas Dhu Distillery - North East Scotland

Due to the fact that many of the best tourist attractions are spread so far apart I recommend you take advantage of the SPT Subway system which runs in a circle around the most-visited areas and then walk to your destination from the nearest available station.

The subway – the only one in a Scottish city – is insanely convenient and only takes 24 minutes to complete a circuit of its 15 stations.

I found the carriages to be clean, modern and an extremely efficient way to explore the city, and the tickets are reasonably priced too at just £3 (as of 2019) for an all-day adult smartcard or £4.20 for an unlimited travel paper ticket. Take that London Tube!

As a top tip I recommend heading to the SPT website and downloading a copy of their station map. That way you can walk around the city’s attractions and find your most convenient subway stop at the end of your day. Alternatively, head on over to Google Maps as they also list all the SPT stations. Honestly, where would we be nowadays without Google?

Buses meanwhile are quite busy and seem to attract ‘interesting’ characters whenever I’ve been on them (or perhaps I’m the one that attracts these people) and I’m afraid they’re not a patch on Edinburgh’s beautifully clean Lothian Buses.

That being said, First Buses cover the entire city and you can get a day ticket across all city zones for £4.60 or a family ticket from just £9, which makes for a cheap day of exploration with the kids.

As far as taxis are concerned they’re by far the easiest option, but also the most expensive.

Glasgow Taxis are the official licenced service and they have an amazing website and app that makes booking an absolute doddle.

They have a fleet of over 800 taxis and operate 24/7, 365 days a year so you’ll always be able to get to your destination no matter what the other modes of public transport are doing.

Due to the fact the west coast is close to the Atlantic you’ll frequently find temperatures are a little bit cooler than the east coast, though because Glasgow is set inland it misses out on many of the downpours that the coastal towns are subjected to.

You may also like...  The 12 Best Castles to Visit in Scotland

Bear in mind that these are average temperatures and day-to-day conditions can vary considerably, so don’t be surprised to find yourself in blazing mid-20’s sunshine in summer and below-freezing blizzards in winter.

That being said, you can pretty much guarantee that outside of the summer months you’ll be subjected to quite a few rainy days and unfortunately Glasgow doesn’t fare too well when it comes to getting a good-old-fashioned British downpour.

December and January suffer the worst of the wet weather with an average 25 rainy days per month and even August gets between 10 and 15 days of rain, so you might want to pack an umbrella if you’re thinking of visiting.

But at least we get plenty of summertime daylight at this latitude and you’ll find the sun rising around 5am and setting at 10pm, giving you a full 17 hours of light to enjoy.

This is in contrast to winter where the sun rises around 8.30 in the morning and sets around 4pm, giving you a miserable 7 and a half hours of light which might be worth bearing in mind if you’re thinking of visiting the city in the colder months.

Best get those SAD lights out.

I’ve included a map of the best places to visit in Glasgow below so you can get your bearings and find out where the attractions listed in this article actually are, with details of each attraction detailed on the following pages.

Map of places to visit in Glasgow 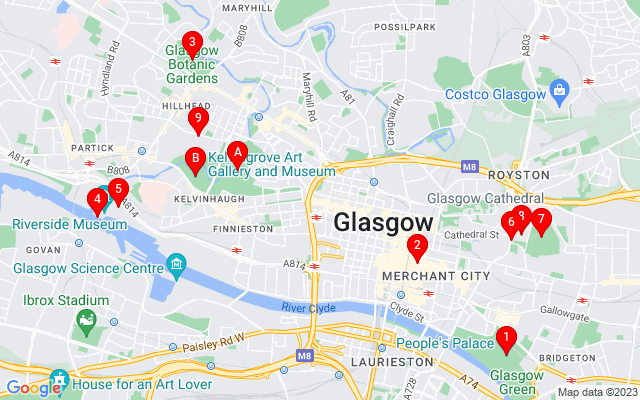 Scroll down for the next page

The Best FREE Things to do in Scotland

An Itinerary For: A Glasgow Weekend

The 6 Most Haunted Places in Scotland to Visit at Halloween

Find other attractions near you with my Scottish Attractions Map.

Hi! I’m Craig, I live in Scotland, and I love exploring this amazing country. My mission is to help you discover the very best Scottish attractions and places to visit.

Join my newsletter and get a FREE ebook about the best tourist attractions in Edinburgh.

We use cookies to ensure that we give you the best experience on our website. If you continue to use this site we will assume that you are happy with it.OkNoPrivacy policy