The Balmoral Hotel is a historic building situated in the heart of Princes Street in Edinburgh. Its 58-metre clock tower is one of the most prominent landmarks in the city.

The luxury hotel was built in 1902 by the North British Railway Company and it’s now a popular tourist destination that attracts visitors to its many restaurants and bars.

About The Balmoral Hotel

If you’re looking blankly at this page and wondering why a hotel has been included in a website about Scotland’s best tourist attractions please bear with me. I mean, I get it, a hotel has nothing to do with tourism other than a place to rest your travel-weary head and filling up with a gut-busting Scottish breakfast, right?

Well, that’s totally correct, except in the case of The Balmoral Hotel, where it kind of isn’t.

The Balmoral is something of a landmark in Edinburgh, partly because it’s one of the grandest buildings in the city and partly because it has been a prominent feature of Princes Street for well over a hundred years.

Built in 1902 for the North British Railway Company, The Balmoral Hotel (originally the North British Station Hotel) lies at the eastern end of Princes Street a short distance from The Scott Monument and directly adjacent to Waverley Train Station.

It’s an impressive building with its grand Victorian architecture and imposing clock tower and any visit to Edinburgh’s New Town wouldn’t be complete without a few photographs of it set against the backdrop of Edinburgh Castle.

The Balmoral is supremely luxurious but there are a few quirks about it that you’ll discover when you come to Edinburgh.

For instance, stand outside the building and take a look up and you’ll see the huge clock face soaring 190 feet overhead which is one of the most visible structures in the city. You might be surprised to learn that it’s intentionally set three minutes fast so that people hurrying to Waverley station will be less likely to miss their trains.

In fact, the only time of the year when the clock is set to the correct time is New Year’s Eve when the city explodes in a riot of noise for the famous Hogmanay celebrations.

Other interesting facts about the Balmoral Hotel are that it has its very own tartan inspired by the natural landscape of Edinburgh, and that it was a favourite dining spot for the Queen Mother who was apparently very fond of having a lamb roast in the main restaurant.

The story of The Balmoral began with a competition run by the North British Railway Company in 1895 to find the best architectural design for a hotel that would accommodate the rapidly-increasing number of visitors arriving at Waverley Station.

The North British Hotel, or The N.B. as it was known for most of the twentieth century, became home to weary railway travellers until 1983 when The Gleneagles Hotel Company privately purchased it and then subsequently sold it to Rocco Forte in 1990.

The new owners completely renovated the building inside and out and a £23 Million re-fit in 1990 means the interior is virtually unmatched by any other hotel in Scotland. Even the name suggests a place of luxury and opulence, with the word Balmoral meaning ‘majestic dwelling’ in Gaelic.

I was lucky enough to enjoy an overnight stay a couple of years ago so I know first-hand how stylish the rooms are. In total there are 167 rooms and 20 suites and while I can’t comment on them all I can confirm my room dripped with elegance from every nook and cranny.

The stylists have somehow managed to mix traditional decor with modern colours and fabrics and it all works beautifully together. It just feels extra-special somehow and it’s as far removed from a budget hotel as you can get, although be aware you’ll be paying a hefty price for the privilege. Still, if you have the means it has to be the ultimate place to stay in Edinburgh.

If you want an overview of the cost of staying in various Edinburgh hotels take a look at my ‘How Much Does It Cost To Visit Scotland?‘ guide.

But what about if you’re not intending on spending a night or two in the hotel? Well, you’ll be pleased to know that walk-in visits are more than welcome thanks to the superb cafés and restaurants inside. Once you step foot through the revolving doors you’ll immediately realize how big the hotel is so my first suggestion is to head over to the reception desk and get your bearings.

If you find yourself in Edinburgh for Christmas I highly recommend stopping off at the Balmoral for a relaxing drink after a hectic afternoon at the Christmas markets, but to be honest it’s worth popping in whatever time of year it is.

There are 6 different dining areas which all offer a unique experience so here’s a quick overview of each one:

Brasserie Prince is a French-themed bistro that overlooks the corner of North Bridge and Princes Street. The food is a seasonally inspired fusion of French and Scottish cooking made with locally-sourced ingredients, and while it’s not the most luxurious dining space in the hotel I have to say it’s my favourite, purely becasue it has such a relaxed atmosphere.

The bistro is instantly recognisable if you take a look at my virtual tour further down this page where you’ll see the blue, green and pink tones of the well-stocked bar framed against traditional oak-panelled walls.

Bar Prince is located next to Brasserie Prince where it continues the French theme with big comfy chairs around patio-style tables and leather stools lined against the bar. This is a more intimate area that centres around the delicious cocktails concocted by the hotel’s expert bartenders and while alcohol might be the main event you can still enjoy a great selection of food from the à la carte menu.

Number One‘s restaurant offers the best dining in Edinburgh (in my opinion) and it’s the place to go if you want a memorable culinary experience. This Michelin-starred restaurant serves seasonal ingredients from local suppliers in a setting that’s possibly the most decadent in Edinburgh, easily rivalling the equally-luxurious The Witchery on Castle Hill.

It’s not cheap, but let me assure you, you’ll be hard-pressed to find anywhere better in Scotland.

Palm Court is another ultra-luxurious dining space that exudes indulgence and it’s the place to head to if you’re intending on enjoying an afternoon tea with a tasty cake or two three.

The room is enormous and kind of knocks you back when you first walk through the doors, similar to the effect you get the first time you visit The Dome in Edinburgh. Thanks to the enormous glass dome in the ceiling, Palm Court is bathed in natural light which gives it a wonderfully light and airy feel and the decor is sumptuous, with hand-painted wallpaper and beautiful drop chandeliers.

You can have a good look around Palm Court in 360-degrees in my virtual tour below.

If you’re in Edinburgh and you’re partial to a dram of fine whisky, Scotch should feature somewhere in your list of places to go. It’s not the biggest whisky bar in the city (that title has to go to the Scotch Malt Whisky Society ‘The Vaults‘ venue in Leith) but it is one of the best, with an eye-popping selection of over 500 unique whiskies.

Obviously this isn’t the place to head to if you’re a family with children in tow but if you’re able to hand them over to their grandparents for the night I thoroughly recommend you do so.

Scotch is a lovely, informal bar that doesn’t have the overly-snobby attitude of some Edinburgh whisky bars and instead seems to concentrate on just enjoying whisky – something I applaud it for.

Lastly, The Gallery is a small area of the hotel that is favoured by those wanting a quiet, relaxed place to enjoy a beverage away from the busier areas. Having only looked around it on a few occasions I can’t comment too much but I can confirm it does look very nice thanks to a varied collection of artwork sourced from the oldest fine art gallery in Scotland.

Directions to The Balmoral Hotel 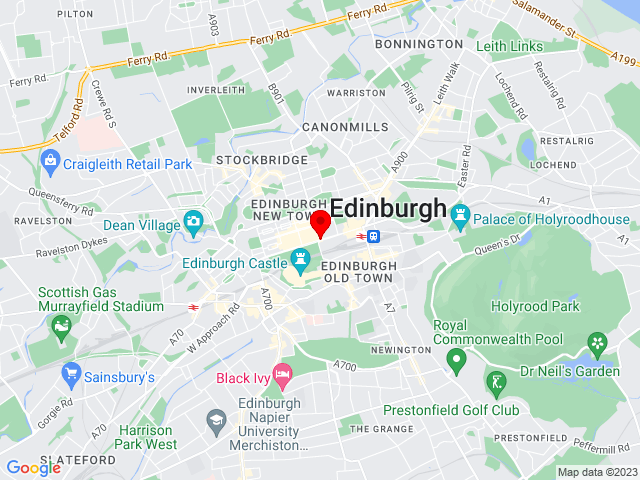 Things to do near The Balmoral Hotel

Accommodation near The Balmoral Hotel

FAQ’s about The Balmoral Hotel

What was the Balmoral hotel in Edinburgh previously called?

How many rooms does The Balmoral Hotel have?

There are 167 rooms and 20 suites in The Balmoral Hotel.

Does The Balmoral Hotel allow dogs?

The Balmoral Hotel allows visitors to bring their dogs as long as they are under 20 lbs. heavier dogs are only permitted if written consent is given by hotel management.

What are the check-in and check-out times at The Balmoral Hotel?