The National Gallery of Modern Art in Edinburgh cares for, researches and displays the national collection of modern art. The gallery also stages art exhibitions and offers visitors the chance to explore artworks in its large grounds as well as indoors in the two 19th-century buildings.

Review of the Scottish National Gallery of Modern Art

The National Galleries of Scotland control three galleries housing great Scottish artworks, all of which are based in Edinburgh.

The journey to the gallery is well worth it though as not only is it spread out across two beautiful early 19th-century buildings but the landscaped grounds are full of artworks that can be enjoyed in addition to the ones housed indoors.

The primary purpose of the gallery is to showcase the Scottish national collection of contemporary art dating from the early 20th-century to the present day, and the vast collection covers all forms of media across 6,000 unique works, from sound and video to paintings and sculpture.

The collection is a total feast for the senses and many thought-inspiring artworks are guaranteed to give you cause for quiet contemplation, while the combination of elaborate gardens and the maze of gallery rooms spread across the two buildings will no doubt keep you entertained for a good hour or two.

The National Galleries of Scotland provide a bus service to transport visitors from the Scottish National Gallery in the city centre to the Modern Art Gallery and back again, while cafés can be found in both the Modern One and Modern Two buildings alongside souvenir shops, an art library and a book archive.

Although admission is free for the static collections and the sculpture park there are charges for some of the exhibitions so you might want to check the National Galleries Scotland website before you leave home to see what’s currently on, especially as most paid exhibitions cost over £10 per ticket.

That being said they’re not bad value if you really like modern art, but if you’ve only got a passing interest I’d advise you to stick to the static collections as there’s more than enough going on to keep you occupied for most of an afternoon.

Just bear in mind the majority of young children won’t ‘get’ a lot of the artworks so they’re going to get bored quite quickly.

Luckily though, the gallery is opposite the Water of Leith which offers a lovely walk along picturesque waterside paths with ample bird feeding and puddle splashing opportunities.

To get there, cross the bridge from the Modern One into the Life Tribute Memorial Park and follow the river towards Dean Bridge on Queensferry Road.

By the way, if you want to visit another modern art gallery you’ll find one of the best in Scotland at Jupiter Artland. Read my Guide to Jupiter Artland for a full overview.

Things to do at the Scottish National Gallery of Modern Art

Modern One is highly regarded for its rotating collection of exhibits and the permanent collection includes dramatic pieces from renowned artists like Francis Bacon, David Hockney, Tracey Emin and Andy Warhol.

Across the road Modern Two houses selected pieces from the permanent collection as well as a continually updated catalogue of exhibits, and any interested member of the public can view the history of modern art media in the comprehensive archive library.

Externally, a sculpture park created by the landscape designer Charles Jencks dominates the lawn of Modern One where a huge serpentine mound surrounds a crescent-shaped pool of water.

It’s certainly impressive and it reminded me of my last visit to Jupiter Artland near Edinburgh which features an even bigger Jencks artwork.

While walking around the grounds you’ll be able to get up close and personal with artworks such as the bronze sculpture ‘Master of the Universe’ by Eduardo Paolozzi which is based on a drawing of Sir Isaac Newton, and the installation on the façade of Modern One by the artist and musician Martin Creed.

It’s all very interesting but I’ll be the first to admit that this gallery isn’t for everyone, and by its very nature modern art is going to divide opinions so bear that in mind if you find yourself rolling your eyes whenever you see arty types on TV enthusing over some emerging artist’s display of their manky old bed.

But if you’d like to see a Scottish attraction that’s just a bit different to the standard tourist traps you’ll find on Edinburgh’s Royal Mile I reckon the National Gallery of Modern Art is well worth a visit.

The history of the Scottish National Gallery of Modern Art

The galleries are divided into the Modern One and the Modern Two, and both have equally interesting histories.

While the very first gallery of modern art was located at the Edinburgh Botanic Garden, it soon became apparent that larger premises would be needed to house the growing collection, so in 1984 the gallery moved to its first location (Modern One) on Belford Road and then expanded into another building (Modern Two) across the road in 1999.

Modern One was formerly the John Watson School, an institute for fatherless children that had been designed by William Burn in 1825 before being taken over by the gallery.

Modern Two was created by Thomas Hamilton in 1831 as a hospital for orphans and was subsequently used as an education centre before being converted into its present use as a home for a collection of modern surrealist artworks. 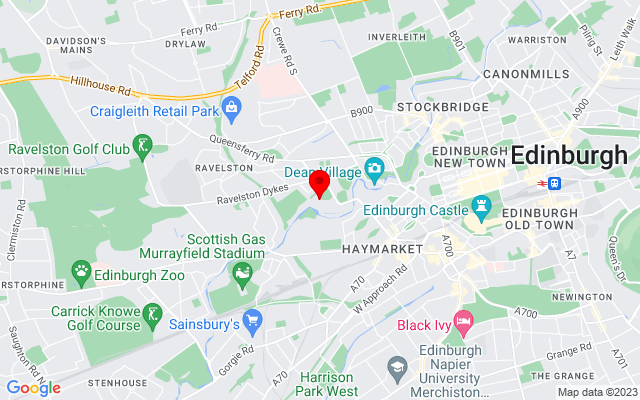 Things to do near the Scottish National Gallery of Modern Art