The complete guide to the top Outlander filming locations near Edinburgh

Unless you’ve been living under a rock for the past five you’ve probably heard of Outlander – the time-travelling TV series that begins in 20th-century Scotland before taking a detour 200 years into the past.

Originally a series of books written by American author Diana Gabaldon, Outlander was turned into a television series after the novels repeatedly topped global top-seller lists, and so far the series has sold an incredible 25 million copies worldwide.

To date, there have been four seasons of the show distributed by Sony Pictures and there are another two already in the works, so I think it’s safe to say the world of Outlander has been a bit of a success story.

The tale revolves around two people – Jamie Fraser, a fierce Highland warrior and Claire Randall, a resourceful WWII medic – who meet in a bizarre turn of events that sees Claire thrown back in time after touching a magical stone circle at Craigh na Dun in Scotland.

She wakes up to find herself thrust 200 years into the past with the Jacobite uprising in full swing, and the ’45 (as the rebellion is often called) is the main storyline for the first and second seasons which sees the time-travelling medic visit many of Scotland’s most beautiful locations – some of which I’ll show you later on in this article.

As Claire struggles to survive in a rugged and ruthless world she meets Jamie Fraser and the two fall in love, but not before encountering the depraved Captain ‘Black Jack’ Randall, a British Redcoat who seems intent on inflicting as much torment on the couple as possible.

All the while in a parallel storyline set in the late 1940s, Claire’s husband Frank is desperately searching for his missing wife, unaware that Black Jack – his ancestor – is doing the same, but for his own malevolent reasons.

That’s the basic premise of Outlander and I can only apologise to fans of the show for this brief introduction as it’s pretty much impossible to capture the atmosphere of it in a few short sentences, but for those of you who haven’t seen it yet I’ll say this – just go watch it already.

This isn’t a rom-com or a lighthearted romance drama, oh no. What Outlander actually is, is a no-holds-barred account of life in 18th-century Scotland that’s quite unlike anything else that’s been aired on TV before.

You may also like...  A Guide To: Dallas Dhu Distillery - North East Scotland

Each episode follows history in a brutally honest way so don’t be surprised to see gory murders, torture, and graphic sex scenes right from the get-go. But it also depicts Scotland’s landscapes and cities in a way that transcends history.

Take season 1 as an example. Throughout the 16 episodes you’ll find yourself transported to Doune castle near Stirling, East Linton Mills in East Lothian, the village of Culross in Fife and Loch Rannoch in the Highlands. All places you can visit today that are remarkably unchanged since the 18th-century.

Visiting the world of Outlander

In this article I’ll highlight the best Outlander filming locations that are easily accessible as a day trip from Edinburgh no matter the time of year.

I’ve tried to include a few of the more unusual locations in addition to the standard tourist hotspots so that you’ll get a good taste of what Scotland has to offer, with some sites requiring an entrance fee to visit and others that are completely free.

Don’t forget to take a good look at my Outlander filming locations map further down this page, and maybe check out the official Visit Scotland website which has another map of Outlander sites.

I’ve also added a few options that are suitable at different times of the year and in different weather conditions because we all know how changeable the elements can be in Scotland, so check out my weather forecast page before you leave, just to be on the safe side.

But regardless of the weather, there are a vast range of activities and attractions open throughout the year in Scotland, and you’ll find this country has a special charm no matter the season. 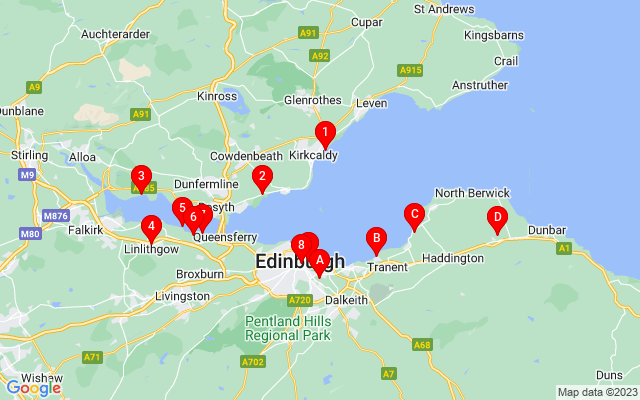 East Lothian lies to the east of Edinburgh and is easily reachable by car, train or bus. This is one region of Scotland that’s criminally under-visited by international tourists, most likely because they’re spending all their time in the tourist-trap attractions in Edinburgh.

But take the time to explore the county and you’ll find there’s a huge range of places to visit.

The coastline, in particular, is absolutely glorious and rivals any other stretch of coast in the country (at least, in my opinion it does) with stretches of golden sand running along the seafront from the Edinburgh suburban town of Musselburgh all the way to Dunbar in the east.

You may also like...  A Guide To: Blair Castle - Central Scotland

If you want to find out more about this lovely rural county you should read my Complete Guide to East Lothian where I’ll tell you all about its towns, attractions, and what makes it such a special part of Scotland.

This small East Lothian town was the site of a pivotal battle in the Jacobite uprising.

The ancient fishing town of Prestonpans lies 5 miles (8km) east of Edinburgh next to the historic town of Musselburgh, and takes its name from monks that used to manufacture salt on the beach using giant pans.

Stories from the 11th-century mention a traveller named Althamer who became shipwrecked on the beach near modern Prestonpans and found himself unable to return home, so he decided to build a settlement there.

In later years monks from Holyrood in Edinburgh arrived and created their own settlement, calling it Priest Town. Over time this name shortened to Prieston.

The monks found this stretch of East Lothian coastline to be perfect for manufacturing salt thanks to its location next to the sea and its wide, raised beaches. Because the monks dried seawater in pans to produce salt the name of the settlement changed again to Prieston Pans, and finally Prestonpans, the modern name used today. History lesson over.

Outlander sees the town featured for the entire 10th episode of season 2, but as usual with movies and TV shows filming didn’t actually take place there, instead using the fields of Torbrex Farm a few miles south of Cumbernauld midway between Edinburgh and Glasgow.

The premise of the episode is that in September 1745 the Jacobite army led by Charles Edward Stuart defeated the government forces of Sir John Cope when the inexperienced British infantry fled from a ferocious Highland charge in a battle that lasted a mere 30 minutes.

The episode revolves around the factual events that occured during the battle when a series of mistakes by the English commanders led to a large number of soldiers deserting.

That, coupled with an inexperienced collection of officers and poorly trained troops meant that as soon as the Highlanders charged (the standard military tactic that eventually caused their defeat at Culloden) most of the remaining English artillerymen fled the scene (and who can blame them).

You may also like...  A Guide To: George Square in Glasgow

The site of the battlefield is actually located close to what is now the Prestonpans train station, but you can view the areas where each army formed their lines from the top of a memorial hill on the town’s outskirts. It’s not particularly high but you’ll get a good view of the surrounding countryside up there and you can view display panels that depict the events of the battle as they unfolded.

If you’re a fan of Sam Heughan who plays Jamie Fraser you’ll no doubt remember the scene at Lallybroch Mill (Lallybroch is Clan Fraser’s ancestral home) where Jamie hides from the Redcoats by submerging himself underwater for a nail-bitingly long time.

When the soldiers leave, Jamie climbs out wearing nothing but his birthday suit, no doubt accompanied by wolf-whistles from female viewers up and down the country.

The scene was filmed at the National Trust for Scotland Preston Mill, one of the oldest working mills still in use today, and a historic site that’s well worth visiting regardless of its use as an Outlander filming location.

The countryside surrounding East Linton is extraordinarily pretty and there are a huge number of countryside walks to enjoy in the immediate area, plus its home to excellent nearby attractions like Hailes Castle and the National Museum of Flight.

This is a category A listed building that dates from the 18th-century though there’s been a mill on the same location for at least 500 years. Even though it’s so old the mill was used for commercial milling right up until 1959, and remarkably the iron water wheel and original machinery are still in use, though only as a visitor attraction.

Preston Mill is unusual in that it features a Dutch-style conical roof which almost looks out of place in Scotland, but even so it really does look idyllic set amongst rolling fields of wildflowers with the gentle River Tyne flowing past it.

While you’re there keep your eyes open for the Phantassie Doocot on the other side of the Tyne – a 16th-century building that used to house over 500 pigeons (a major food source back in the day).

You’ll find this grand neoclassical mansion house a short drive to the east of Prestonpans near the coastal village of Longniddry.

Gosford House is the seat of power for the Earls of Wemyss and March and is set in 5,000 acres of parkland that borders the Firth of Forth. It’s easy to get to as it’s only around a half-hour drive from Edinburgh, but it’s remarkably unheard of outside of the immediate area which I think is surprising seeing as it’s such an impressive building.

You may also like...  A Guide To: Seton Collegiate Church - The Lothians

The mansion house was designed by the celebrated Scottish architect Robert Adam and it’s considered by many people to be the finest example of his work, which is probably why the Outlander production crew chose it to play the part of the Palace of Versailles stables in the second season.

The house was also used to portray the Helwater estate where Jamie had his liaison with spoiled rich girl Geneva Dunsany who bore his child but later died while giving birth.

It’s fair to say a visit to Gosford house is a must for any fan of the series, but unfortunately you can only view the inside of it on official pre-booked guided tours at specific times of the year. See the Gosford House website for further details.

The grounds, however, are open throughout the year and they offer walks through woodlands and manicured lawns that surround ponds, bowling greens, walled gardens and even a family mausoleum.

To gain entry, head to the Gosford Bothy (signposted on the road past Longniddry) and buy a ticket from the shop inside.

Top-tip – while you’re there grab a sandwich from the cafe and take home one of the locally-made pies from the traditional butcher’s shop. They’re absolutely delicious!

A Guide To: Craigmillar Castle – Edinburgh

A Guide To: Calton Hill in Edinburgh

A Guide To: Free Attractions in Edinburgh